The Thanksgiving Farmers’ Markets are this weekend 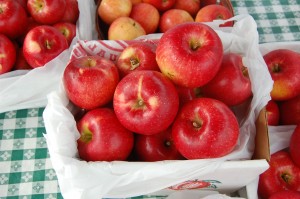 Texas apples at Barton Creek (Photo by Rebecca Wood)
This is the last Farmers’ Market weekend before Thanksgiving, and even though the prediction is for cold weather, it's the time to buy winter squash, greens, turnips, potatoes, carrots, pecans, apples, broccoli, onions, and maybe even picking up your Heirloom turkey tomorrow or Sunday. 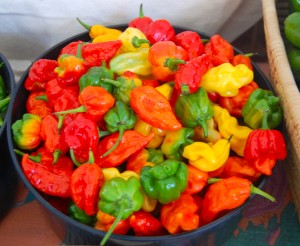 Last of the season Habañeros (Photo by Kate Thornberry)
Thanksgiving comes right in the middle of Central Texas’ richest season. If you want to put on a Locavore Feast, now is the time. Nearly every conceivable vegetable is either thriving right now, or just got picked. Several farmers even have end-of-the-season tomatoes and peppers. This is likely the last weekend for Texas apples, which can be bought from Top O’ Texas Orchards at the Barton Creek Farmers Market.

Lightsey Farms has had Texas baking pears for the last few weeks, as well. I am not sure if they have sold out of this autumn’s harvest yet, but if not, apple and pear pie is a great recipe for Thanksgiving. 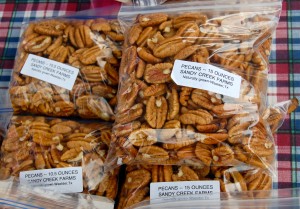 Indian Hills Pecans (Photo by Rebecca Wood)
Pecans have arrived following last week’s freeze in the outlying areas. Indian Hills Farm has fresh Texas Pecans (Sunset Valley and Downtown), and Georgetown Pecans is selling this year’s crop as well (Barton Creek Market). Generally speaking, our local Texas pecan growers watch the prices at supermarkets, and sell for just a bit cheaper. Occasionally they will totally undercut the supermarkets; in any case, pecans are something it makes sense to buy locally: both fresher and cheaper. 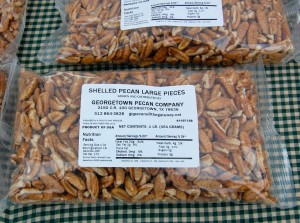 Georgetown Pecans (Photo by Rebecca Wood)
Speaking of pie (that is what you are going to be using the pecans for, after all, you know it’s true), a little known secret is that canned pumpkin puree (for making pumpkin pie) is actually either Butternut squash or Neck Pumpkin squash. Both of these types of squash are available at our farmers’ markets; Butternut from nearly every farmer, and Neck Pumpkin from Fruitful Hill Farm (Sunset Valley and Barton Creek) 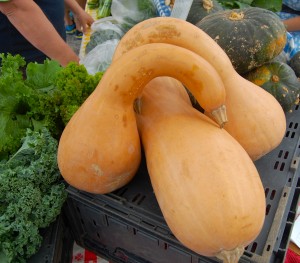 Neck Pumpkins! Aren't they cool? You could dress them up like geese wearing pilgrim hats as a centerpiece. (Photo by Rebecca Wood)
If you aren’t feeling like doing your own baking, the Sunday Bluebonnet Farmers Market at South Lamar and Bluebonnet has a new bakery, Tiny Pies, that specializes in pies of all sizes, from full size to tart size (most of them are tiny, though!) There is also still time to order desserts, pastries, and breads for the holiday from area bakeries, restaurants, and market bakers. Check out our listing of what's available around town. 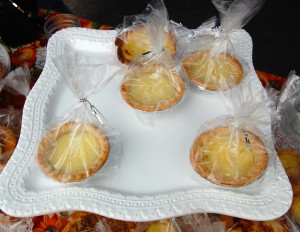 Tiny Pies (they make large ones too) (Photo by Kate Thornberry)
The Barton Creek Market alsi has a brand-new bakery, DeLightful Me, that specializes in lighter versions of handmade, organic baked goods. I bought one of DeLightful Me’s Sweet Potato and Cranberry Bar, and it was a marvelous blend of pure Thanksgiving flavor. Actually the way it went down was, I sampled a piece, then I bought one. Because one taste convinced me. This lady has talent! 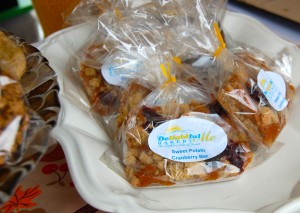 Awesome sweet potato and cranberry bars (Photo by Rebecca Wood)
Back to non-dessert foods: greens in general are looking fabulous this time of year: rainbow chard, mustard greens, bok choy, spinach, arugula, collards, and turnips and turnip greens are at their prime and available at all markets. There is a flood of broccoli; the heads are huge and very tender. 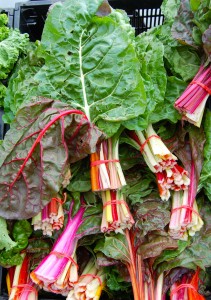 Can you even believe how gorgeous this chard is? (Photo by Rebecca Wood)
I don’t know if you plan to put out a tray of crudites prior to the feast, but my Mom always did (probably to keep us all occupied while she finished things off). For some reason this year the radishes are amazing (maybe it was that 24 inches of rain?). A tray of multicolored carrots, radishes, and green onions with some of Full Quiver Farms’ flavored cream cheese would be a surefire crowd-pleasing appetizer. 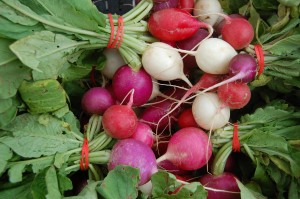 This year's winner: the radishes (Photo by Rebecca Wood)
In other news, Celtic Seafare has begun making gravlax, the Scandinavian smoked salmon made with sugar and dill. Sebastien was selling it so briskly last Saturday it was truly a sight to behold. I don’t know if you caught last week’s report, but Celtic Seafare is now sourcing their salmon from Loch Duart in Scotland, one of the most renowned salmon fisheries on the planet. 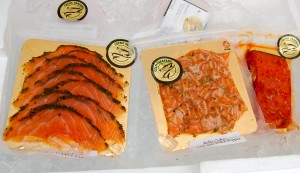 Gravlax and other smoked salmons (Photo by Kate Thornberry)
Last but not least, Austin Honey is selling honey in the comb for just a few short weeks. Beekeepers only sell the comb once a year, because it is too hard on the bees to force them to make new comb more often. Once you’ve had honey in the comb, it just ruins you for regular honey, it is so awesome. There is nothing like it on a hot biscuit. 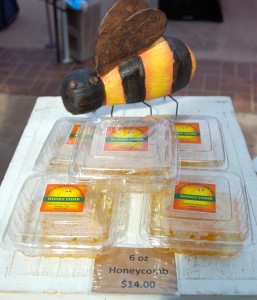 Honey in the comb at the HOPE Market (Photo by Kate Thornberry)
It is my belief that Dewberry Hills Farm will be selling chickens this weekend. Check out their website to see which market they will be gracing with their elusive presence.

Chef Jesse Griffiths has no doubt been so busy preparing all of his roasting chickens, pork roasts, and other holiday fare that he has most likely already sold out but check the website, I could be wrong. For this busy weekend, he is doing a somewhat truncated breakfast and lunch at the market this Saturday:

Dai Due Breakfast & Lunch at the Market