The Craft Beer Cookbook, perfectly sized and chock-full of recipes running from breakfast to dessert, extols the stand-alone virtues of craft beer and explains why incorporating brews into food makes perfect sense. Leavening, tenderizing, and replacing meat-based stock are a few bonuses of cooking with beer, but in all honesty, the power of beer-flavored food is enough.

Dodd, who runs the website www.TheBeeroness.com, gives a quick Beer 101 rundown on the various styles and their best roles in food, and developed recipes for many different flavor profiles. The recipes, community-tested and written efficiently, are accompanied by a “Choose the Right Brew!” notation. The Craft Beer Cookbook is likely suited best for cooks with a few successful meals under belt, though kitchen novices will find the recipes well worth the extra effort. Dodd’s food photography is lovely and nicely represents the beauty of the wide selection of dishes, though Dieters Beware: the vast majority of options are hearty meals brimming with caloric glory. Even the odd couple, craft beer and salad, has a chance for reinvention with an IPA Honey Mustard Vinaigrette, and Dodd was sure to include vegetarian, vegan, and gluten-free options. 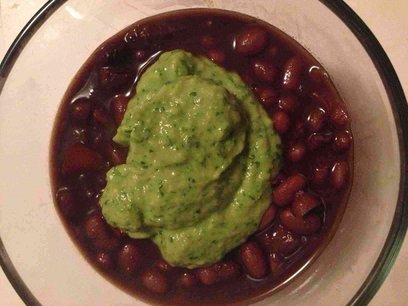 During last week’s cold snap, I made the Chorizo Stout Sloppy Joes. A weeknight meal with a preschool-aged dinner date forced my hand, and I had to forgo Dodd’s suggestion for a chipotle stout or jalapeno porter, instead choosing a sixer of Oatmeal Stout (some for this, some for the next recipe, and some to sip). Quick, easy, and very delicious, I will certainly be making this dish again. The next night was meat-free, so I made the Porter Black Bean Soup with Avocado Cilantro Cream, utilizing the last two brews. I was very surprised to find the richness of the soup was on par with any ham hock stock I’ve made, and the stouts really made it a full-bodied flavor. The dollop of green cream on top sealed the deal. Simple, vegan, and gluten-free (except for the beer, though gluten-free brews are available), this is a great winter staple.

In addition to considering gifting this to almost everyone on my list, I would like to work all the way through the book. I’m excited to practice with some of the more involved recipes and craft beers, and these are only a few I have in mind: Apple Cheddar Beer Pancakes (suggested brew: pilsner or blonde ale), IPA Crab Cakes with Spicy Beer Hollandaise (suggested brew: IPA with citrus notes), Chocolate Stout Brownies (suggested brew: chocolate stout).