What's New in Downtown Austin for Formula One 2013?

Things have been buzzing in Downtown Austin since the last time the international crowd descended here for a big road race. Here are some new things to look for while you're in town. Step into the newly refurbished Sullivan's Steakhouse (300 Colorado) and be greeted by the new wine wall in the entry and a brand new bar that opens into the dining room. Check out the new three-course prix fixe menu while you're there. Though the popular Truluck's (400 Colorado) just up the street is still closed for renovations, their outlet in the Arboretum is open for business just a long cab ride away. If you're on foot in the Warehouse district, the newest eatery on Colorado is California celebrity chef Brian Malarkey's first Texas restaurant, Searsucker (415 Colorado), where our reviewer was very impressed with the brunch. 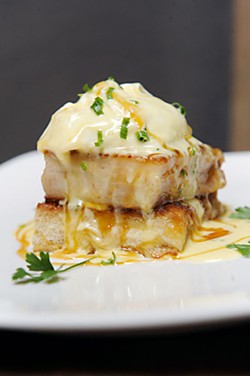 Be sure to drop by the W Hotel (200 Lavaca) to order the COTA Flame cocktail they've created in honor of the Formula One event, in hopes that it becomes the signature drink of the race.

The COTA Flame (Photo by Regan Hackleman for the W Austin) Down in the Rainey Street District, Food Network celebrity chef Brad Sorenson's new No Va Kitchen + Bar (87 Rainey St) has recently added Sunday brunch from 11am-3pm. The other weekend brunch not to be missed on that street is served at El Naranjo (85 Rainey St) on both Saturdays and Sundays from 11am-3pm. The modern exterior of No Va Kitchen & Bar (courtesy No Va)

After the race on Sunday, Nov. 17th, you might want to drop by Mulberry (360 Nueces) between 4-10pm for chef Kristine Kittrell's whole roast lamb with tomato coriander yogurt sauce, roasted lemon potatoes, and a charred green bean and feta salad. This delectable farm-to-table meal is only $30 per person, but does require reservations .