Organic citrus has returned, plus maple syrup, apples, and pecans 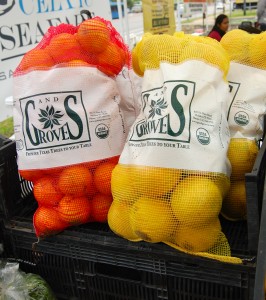 Organic citrus has arrived at all of the Farmers’ Markets, mainly via Johnson’s Backyard Garden, which sells gigantic bags from G & S Groves out of McAllen, Texas. A few other farmers are starting to bring grapefruits, Meyer lemons, and oranges to sell from their own trees, as well. 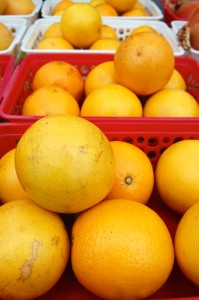 It’s also the beginning of spinach season. Spinach is truly the king of greens, with its mild flavor and tender leaves. This year's first crop is just the right size for salads, though it is big enough for cooking, too.

Although it didn’t freeze in the Austin metro area Tuesday and Wednesday nights, it most certainly did freeze out of town where the farms are. Becky Ottmers told me she planned to pick the tomatoes green, so she would have tomatoes this weekend, but after that, they will be over. Of course, greenhouse tomatoes are available at Austin farmers’ markets much of the winter, mostly from Engel Farms out in Fredericksburg; but the freeze this week has brought an end to the non-greenhouse ones. 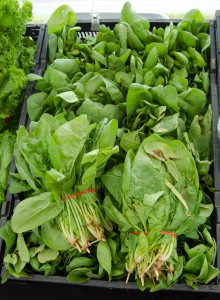 Other crops that are likely to be disappearing from the markets: basil, okra, eggplants, peppers, cucumbers, and summer squash. Chances are if you see any of these items at the markets this weekend, they were picked before the freeze. But that is the beauty of eating seasonally; as some fruits and vegetables end, new ones begin. Broccoli is beginning to come in strong, and some of the most beautiful I have seen is from 2 Happy Children Farm. It is so green it's nearly blue.

The sweet corn has officially ended, but there will be two more weeks of apples. Top O’ Texas Orchards will be bringing Cameos, Jonagolds, and Galas to the Barton Creek Farmers Market from the Panhandle.

This year's crop of Texas pecans is starting to trickle in; Georgetown Pecans will be bringing their nuts to several markets beginning this weekend, and Indian Hills Farms will be selling their perfect pecan halves at the Sunset Valley Market and the Downtown SFC Market. The Capital MetroRail Commuter Train will be running this Sunday, which is fantastic news for folks trying to get to and from the HOPE Farmers Market. Located in Plaza Saltillo, which is the last stop on the line before the Downtown terminus, the HOPE Farmers Market runs from 11am to 3pm on Sundays. This weekend is the East Austin Studio Tour, and the HOPE Market is a great place to stop to get something to eat as you bike or drive from studio to studio. 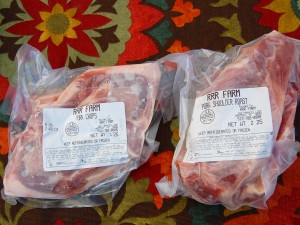 To make the deal even sweeter, this Sunday the Kid’s ImprovEd Shakespeare Company will be performing Hamlet at the HOPE Market at 11am.

Speaking of Sunday Markets, the new market at South Lamar and Bluebonnet (which I personally think should be named the Bluebonnet Market, because, what a great name that would be!) opened last Sunday with over forty vendors. The location seems like it will work, as there is ample parking, many vendors, and plenty of South Austin hippies seeking organics. 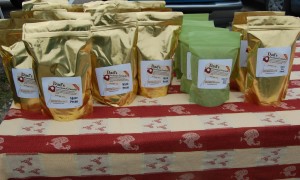 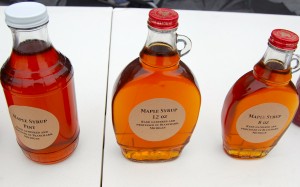 Maple syrup at the Bluebonnet Market (Photo by Kate Thornberry)
Among the exciting new vendors was a young lady selling single-source maple syrup from her parents’ farm in Blanchard, Michigan. She was also selling handmade raspberry jam. I would not be surprised if she sold all 24 jars of the jam, but she will still have the maple syrup this weekend.

BLUE EGGS (Photo by Kate Thornberry)
Vital Farms again have their amazing blue eggs (named “Austin Blues,” get it?) for sale. I had to have a dozen, ‘cause they are blue, people! 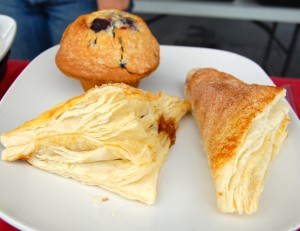 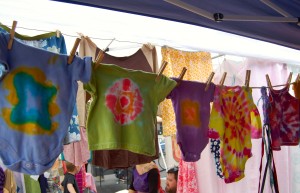 Tie-dye Onesies at the Bluebonnet Market (Photo by Kate Thornberry)
The Bluebonnet Market has more craft vendors than the Barton Creek Market, including several fashion and clothes tables. These tie-dyed onesies are offered by Falling Spring Star Creations and would obviously look perfect on your little hippie. 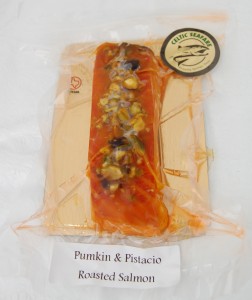 Amazing Scottish Salmon (Photo by Kate Thornberry)
Celtic Seafare is currently selling at the Bluebonnet market as well. Sebastien Caillabet is now getting his salmon from Loch Duart in Scotland, salmon from those waters are consistently judged superior in taste, quality, color, and appearance. Caillabet is always coming up with new, seasonal flavors; last week he made this Pumpkin and Pistachio Salmon.

Flying Pig Provision Company is now making artisan, thin-sliced corned beef, suitable for sandwiches. Flying Pig sells at the Barton Creek Market and the Lone Star Market, and their smoked meats are, in my opinion, the finest in town.

Dewberry Hills Farm will not be at either market this weekend, neither Downtown nor Sunset Valley. Jane says the chickens aren’t big enough to sell yet. No matter how much Dewberry Hills expands, they simply can’t keep pace with demand. Once you’ve tasted chicken that tastes like chicken, you can’t go back, after all. 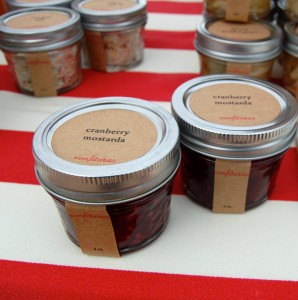 Cranberry Moustarde from Confituras (Photo by Kate Thornberry)
For the next few weeks Confituras will be selling cranberry products along with their regular line of seasonal preserves; Stephanie’s popular Tipsy Cranberry Pecan Sauce had made its appearance, and Cranberry Moustarde has been added to the line as well. Stephanie says it is the most savory item she has ever made, and I can’t wait to buy some.

Winter Squash Challenge: This week I baked a Butternut. The experience reminded me why the Butternut is the most popular winter squash: the deep orange color and the silky, yet firm flesh. It definitely outperformed the comparatively pale Sweet Dumpling squash I served alongside it.

Dai Due Butcher Shop is taking Thanksgiving orders for pick-up on November 22nd-24th. This year they are offering porchetta roasts, Turducken sausages, preserved lemons, and mincemeat. Click here for their ordering page.

This Saturday, “Breakfast and Lunch at the Market” will offer:

See you are the Market!