Putting a Little Pep in the Leap of Craft Beer

As I arrived at the American Homebrewers Association (AHA) member rally my biggest concern was crowding. The usual Saturday tour and tasting at Jester King Brewery is crowded with about 450 attendees over the noon-6pm hours of operation.

Courtesy of the American Homebrewers Association

300 AHA members RSVP’d for the rally in addition to the sweater clad booze cruisers who regularly crowd the proverbial ice box. I was excited to see an overflow parking area and a tent (near the spot of some friends’ nuptials) soon to be sullied by the influx of overcarbonated homebrew and clandestine pours of Diacetyl-rich attempts at cloning Pliney the Elder.

The AHA was started in 1978 by Charlie Papazian as an addition to, or little brother of, what would in 2005 become the Brewers Association. Founded in order to promote the homebrewing of beer, cider, and, mead, the AHA, under the direction Gary Glass, now boasts the publication of Zymurgy magazine and raises political support for the rights of homebrewing. Now at more than 36,000 members, AHA advocates strive to repeal antiquated homebrewing legislation left over from prohibition and affiliated state blue laws. In part because of AHA efforts, homebrewing is finally legal in Alabama and Mississippi.

As a longtime member of the AHA, reaping the benefits of many member discounts, I felt the need to give back to the organization. When the call was sounded for volunteers to help with the rally, I did my home state of Tennessee proud and stepped right up. TABC certification in hand, I showed up to the rally 45 minutes early to help get things rolling. I met an interesting group of people. Despite hearing an off-color political joke that would make Ted Cruz snivel in his pants within the first five minutes, I found the crowd most affable. Parking in the unmarked field was very efficient and orderly, such is the homebrewer. 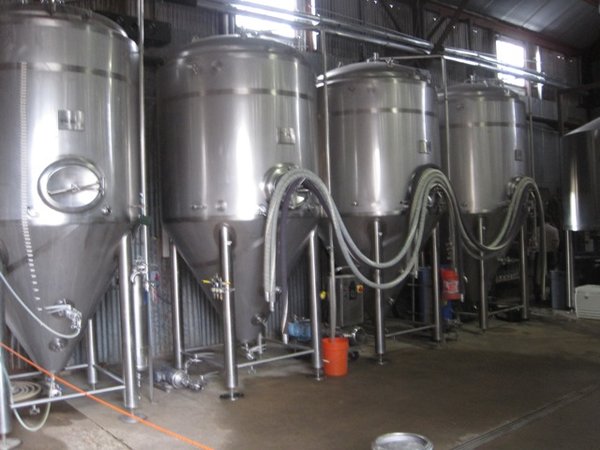 My first responsibility was to wait for people to want to drink beer. This did not take long. Myself and fellow TABC certified Ron were tasked with manning a jockey box pouring Hops & Grain’s Funk Del Roble and Jester King’s La Petit Prince. Austin homebrew clubs Austin Zealots, Definitive Ales, and Texas Carboys were represented well. The Texas Beer Brigade, mostly military members hailing from Killeen, Texas, joined in the festivities and poured several 5 gal kegs of their creations. Homebrew supply stores from Dallas and Killeen also educated members and provided expertise. The homebrew highlight was a Zealot’s pale ale cask dry hopped with Centennial and Citra. Despite being over carbonated and exploding a bit, it was still balanced and tasty.

A moment was set aside to remember the late Walt Powell. Flix Brewhouse founder and supporter of the homebrewing community, Walt was toasted in a most rambunctious way.

The two highlights of the afternoon were the Jester King tour with brewer Michael Stuffings and the bottle share. The tour was interesting, but I’ve looked at a few mash tuns. Michael was thorough and spoke more in-depth with his homebrewing trade association member crowd, though I fear Craigslist will soon be full of used homebrew equipment infected with Brettanomyces.

The bottle share portion included many rare and hard-sought beers. I was impressed to try Jester King and Mikkler collaborations Beer Geek Rodeo, Weasel Rodeo, and Whiskey Barrel Rodeo in sequence, a true delight for any beer aficionado.

The rally ended with a raffle for members with prizes ranging from t-shirts and books to the ad hoc vacuum insulated growlers, with growler koozie! A fine day was had by all.