Trotter was known for innovation, dedication to excellence

When a social media discussion earlier this week mentioned the untimely death of Chicago chef/restaurateur Charlie Trotter, my first thought was that I should call young Austin chef Alex Kahn and offer my condolensces about the loss of an important mentor in his career. 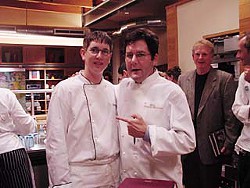 I knew Trotter had been the younger chef's mentor because I'd covered the Texas Book Festival event where the two chefs met here in 2001. Trotter was in town promoting a new cookbook with a festival appearance and a class at Central Market. Alex Kahn was a high school student and frequent Central Market cooking school volunteer who was already spending some nights and weekends as an employee in the kitchen at the Four Seasons Hotel. During a conversation over the signing of some cookbooks, Trotter encouraged the aspiring young Kahn to come a spend some time working in the kitchen at his highly renowned Chicago restaurant. Kahn wisely took him up on the once-in-a-lifetime offer the next year.

"Working for Charlie changed the direction of my whole life, my career. He's the reason I have a restaurant today," Kahn told me on the phone Wednesday. "I cried all day yesterday. It's unbelievable that he's gone. I'm going to Chicago for the funeral."

After working for Trotter, Alex Kahn graduated from the Culinary Institute of America in Hyde Park, New York and spent several years working in restaurants in New York City and Austin before opening Trento (3600 Capital of Texas Hwy North) with his family in 2012.

Alex Kahn is but one of thousands of chefs who took guidance and inspiration from Charlie Trotter, who was one of the more influential American chefs of his generation. Trotter's pursuit of excellence in his craft and the innovations he brought the restaurant business in America (tasting menus, kitchen chef's tables, no smoking dining rooms, excellent service)helped to elevate the practice of fine dining to the level of art and craft in this country, rather than simply a trade.