Tomatoes are back! Plus a new Sunday market in South Austin 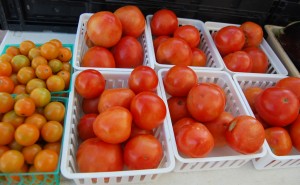 Sweet red and yellow tomatoes (Photo by Kate Thornberry)
There will be tomatoes aplenty this weekend at the market, as vines have bounced back from October’s hot, humid start, and torrential finish.

Ottmers Family Farm (Sunset Valley) has a good tomato crop, Johnson’s Backyard Garden (all markets) has bushels and bushels of Early Girls, Hairston Creek Farm has both yellow and red beauties, and many other farmers will have them, too. 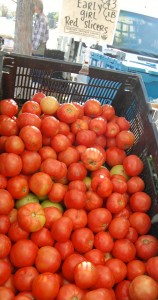 Early Girls from JBG (Photo by Kate Thornberry)
As the autumn progresses, the tomatoes get sweeter and sweeter due to chilly overnight temperatures. They just get better and better until that first freeze, and then, of course, it is all over. 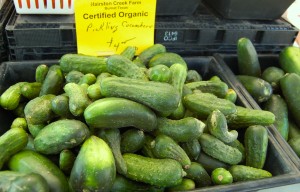 After a few weeks during which I saw nary a cucumber (other than Comanche Oaks’ Japanese Ice ones), cukes are making a little comeback, as well. Hairston Creek Farm has German pickling cucumbers, as well as the standard salad variety; Johnson’s has salad cucumbers, too. Cucumber vines are very sensitive to cold temperatures, so they won’t be around long. It is actually possible to buy lettuce, tomatoes, cucumbers, and peppers at the same time right now! Bring me my fainting couch! 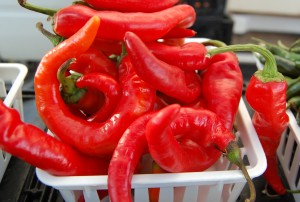 Bell peppers, Gypsy peppers, hot peppers, and even Jalapeño peppers are at the markets this weekend. Several farmers have unusual varieties for sale: Cayenne and Shishito were available at the Triangle Market this Wednesday. 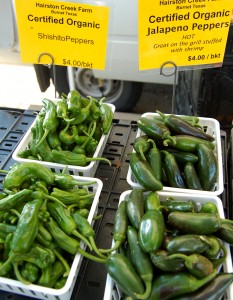 The SFC Triangle Farmers Market runs every Wednesday from 3pm-7pm, fulfilling the mid-week need for local produce, eggs, grass fed beef, pastured chicken, and pork. The Triangle is miniature compared to the weekend markets, but the vendors who sell there are reliable, and they manage to cover all the basics. This Wednesday I saw Animal Farm (the only local farm that makes a priority of growing lettuce year-round, no matter how searing the temperatures), Lightsey Farms, Hairston Creek Farm, Milagro Farm, Johnson’s Backyard Garden, Gardener’s Feast Tamales, the Happy Vegan, and Richardson Farms (meats), and Swede Farm Dairy. 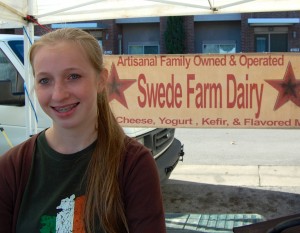 Right now Tim, Lee Anne, and Sara Carlson of Swede Farm are jet-setting to a trio of film festivals in Europe, helping to publicize the film Stop the Pounding Heart. The flick was filmed on their farm in the summer of 2012, and most the Carlson family appears in it. (I believe Sara is kind of the star, though!) So young Linnea Carlson was tending the stand by herself. 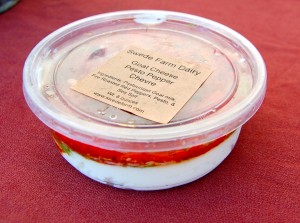 If you think you might enjoy a mild chevre layered between fresh basil pesto and roasted sweet red peppers, get to an SFC Market and try Swede Farm’s Pepper Pesto Chevre. It is completely amazing, an absolutely heady combinations of flavors that tastes like pure summer.

This week’s Biggest News Story is the premiere of a new farmers’ market at South Lamar and Bluebonnet this Sunday. This new market is an offshoot of the Barton Creek Farmers Market, and it will be the only Sunday Farmers’ Market in South Austin (the other Sunday Markets are north of the river, and the Lone Star Market is in Bee Caves). If this new market has a quarter of the vendors the Saturday Barton Creek Market enjoys, it will be spectacular. Next week I will report back with all the juicy details.

I have also heard that this lot at Bluebonnet and Lamar will host a flea market on Saturdays, with this Saturday being their grand opening. 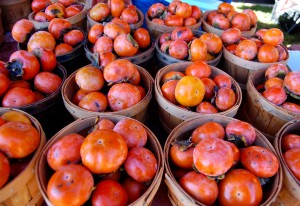 Dewberry Hills Farm will only be appearing at the Sunset Valley Farmers Market this weekend. Jane is going to be setting up by herself this Saturday, and she says that frankly the set up at Sunset Valley is a lot easier than Downtown. She also sends this message: “Sorry downtown friends-I miss you! You  could always swing by deepest, darkest South Austin-it's really not that far and the natives are civilized.”

In honor of the recent drop in temperature, Fete Accompli will be serving their magnificent hot chocolate this Saturday for the first time since spring (Barton Creek and Downtown). 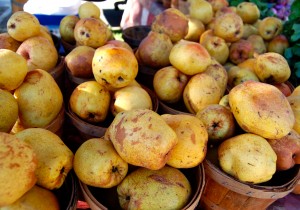 Lightsey Farms has a flood of both hard orange and soft red persimmons; the trees are really producing. They also have cream peas, okra, and those sweet, yellow and pink pears I raved about last week. These firm, sweet pears are crying out to be baked...or poached. So flavorful. 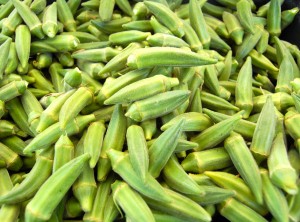 When it gets really cold out, it is wonderful to make gumbo. But there won’t be any fresh okra then; it will all die at the first frost. Now is the perfect time to buy some and put it in a bag in the freezer. When you get a craving for gumbo, you’ll have the okra you need. This okra from Hairston Creek is all baby pods, exactly right for soups. 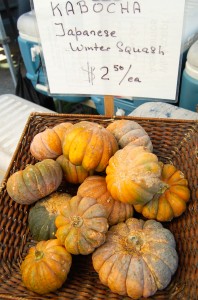 Winter Squash Challenge: This week I baked an Acorn, sliced into rings and lightly coated with olive oil. I used the rings as a base for a Chile Relleno, and in the process discovered that winter squash pairs sublimely with the flavors of poblano, onion, pecans, and raisins. A ring of baked Acorn squash would make a really awesome base for many Mexican dishes, in fact; the flavor of chiles complements the rich orange flesh so well.