Pumpkins at Barton Creek Market (Photo by Kate Thornberry)
As temperatures begin to come down, for a few blessed weeks the summer and winter vegetables are available side by side. Hot-weather crops like summer squash, tomatoes, eggplant, peppers, basil, and okra are for sale alongside kale, broccoli, spinach, pumpkins, and turnips.

To make it even more magical, a few spring crops like sweet corn, pea shoots, and strawberries will be at the farmers’ markets, too. 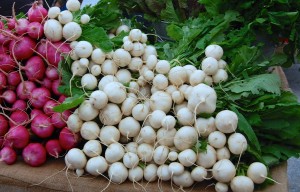 Turnips at the Downtown SFC Market (Photo by Kate Thornberry)
Although I reported last week that Farmer John from 2 Happy Children Farm would have sweet corn, he had to postpone for a week. Actually this weekend will be the final weekend for his miracle sweet corn (Barton Creek Farmers Market and Cedar Park Farmers Market).2 Happy Children will also have gorgeous sweet peppers, lettuce, pie pumpkins and butternuts.

Strawberries will be coming to you from Farmer Brenton Johnson of Johnson’s Backyard Garden, who sells at all area markets. There aren’t a lot of strawberries, so get there early; JBG should have them until the first freeze, and maybe after that if it is a light freeze. 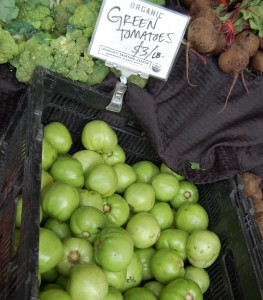 Big green tomatoes from JBG (Photo by Kate Thornberry)
I ran into Farmer Johnson at the Mueller Market last Sunday, and he had lots of additional news. This weekend he will be bringing in the first crop of spinach, so there ought to be bags and bags of young spinach at all his stands. He will also be selling pea shoots, mustard greens, fennel, and as far as I know he is the only farmer currently selling green tomatoes for your frying pleasure.

THE BIGGEST STORY OF THE WEEK, though, is this: Indian Hills Farm is making and selling their very own Central-Texas style dry sausage! Apparently they have been making this for a while, but I didn’t discover it until last Saturday. I have always wondered/been frustrated by the fact that to get a nice German or Czech dry sausage, you have to drive out to the country. Well, not anymore. These dry sausages are nice and big, and only $8.95 (Photo by Kate Thornberry)
I bought one and ate the whole thing in one day, and it was fabulous. If anything, it’s even better than Opa’s in Fredericksburg. or Penshorn’s in Marion, TX. Indian Hill Farm also sells little dry sausages rather like “Slim Jim”s, shelled pecans, a few late persimmons, and fresh beef.  (Sunset Valley Farmers’ Market and the Downtown Farmers’ Market)

The biggest story of next week is that a new Farmers’ Market is opening on South Lamar at Bluebonnet on November 10th. It will be brought to you by the folks at the Barton Creek Farmers Market, and may have many of the same vendors that the Saturday Market enjoys. More on this story next Friday! Cameo apples form the Texas Panhandle (Photo by Kate Thornberry)
Top O’ Texas Orchards brought Gala, Jongold, and Cameo apples to the Barton Creek Market last Saturday, and I believe they will be bringing all three to this weekend’s market as well. The Cameo apples are a little tarter and a little greener than the Galas, with a speckled skin. 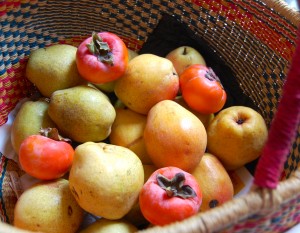 Pears and persimmons from the Downtown SFC Market (Photo by Kate Thornberry)
Lightsey Farms, which sells at the Downtown Market and the Sunset Valley Market, has a really terrific crop of late pears for sale that are even sweeter than the hard pears from earlier in the season. I made eighteen of them into pear butter this week, and several of them were as juicy and soft as Bartletts (the ripest ones had blush-like patches of red on them). Watermelons! (Photo by Kate Thornberry)
The few remaining melons of the season can be found at the Downtown SFC Farmers Market, where I snapped a picture of these beauties.

If you haven’t stocked up on hot peppers yet for the winter, time is running out. Several farmers have baskets of habañeros, jalapeños, and serraños for sale, as well as Thai chiles. Some are selling them in mixed baskets, others by variety. In any case, it is the perfect time of year to pickle or freeze them for use over the winter. Once the first freeze hits, there won’t be anymore until May. Baskets of Hot Peppers from Tecolote Farm (Photo by Kate Thornberry)
Dewberry Hills Farm (Really Good Chicken™) will not be appearing this weekend. But it’s not because all their chickens drowned in the Halloween Floods....all their chickens were safe and dry in the new henhouse. They are just not big enough to sell yet and Jane and Terry are working on winterizing the farm. Ottmers' tomatoes (Photo by Kate Thornberry)
Ottmers Family Farm, whose tomatoes I am constantly raving about, may not be at the Sunset Valley Market this Saturday. (Luckily I bought a case last weekend and finally made my marinara for the winter months, using Ottmers tomatoes, 2 Happy Children sweet peppers, Sand Creek Farm garlic, and basil and oregano from my own garden.) Becky Ottmers warned me that farm work might keep them away this weekend, and that the cold front might do the tomato vines in. I don’t think it got that cold last night, but we shall see. 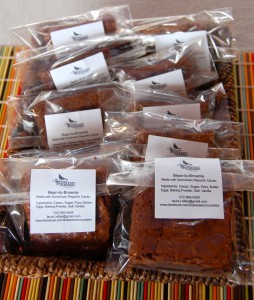 Kiskadee Brownies at the Mueller Market (Photo by Kate Thornberry)
I wended my way back to the Mueller Market on Sunday to buy some of Kiskadee Chocolate’s European-style drinking chocolate mix, but I found when I got there that they had sold out! No doubt because of my intrepid reporting on how magnificent it is. I was therefore forced by circumstance to buy a Kiskadee brownie to soothe my frustration. Tender and moist, with a thin, crispy, crackled surface and a rich, yet light, interior. It was the best brownie I have ever eaten. It hurts me to admit it, because I thought I made the best brownies on earth. I hand over my brownie crown to Kiskadee and their single-source, fair-trade cacao. WINTER SQUASH CHALLENGE (Photo by Kate Thornberry)
Intrigued by Fruitful Hill Farm’s multiple winter squashes, I have decided to begin a series which I"ll call “Winter Squash Challenge”! Not having tried all of the varieties Fruitful Hill grows, I bought one of each, with the intention of cooking them all and reporting on the winner. Fruitful Hill sells Butternut, Sweet Dumpling, Spaghetti, Acorn, Neck Pumpkin, and Buttercup Squash. This week I baked a Sweet Dumpling squash; about the size of an Acorn, it has a striped yellow and green exterior and orange flesh. When baked, it has a sweet flavor and an almost cake-like consistency, less dense and richer-seeming than, say, a butternut. This one might turn out to be my favorite. These are at the Downtown Market, but there were flowers just as gorgeous at Mueller (Photo by Kate Thornberry)
All four markets I attended last weekend (Downtown, Sunset Valley, Barton Creek, and Mueller) had gorgeous flower bouquets for sale. With the rains we have been having, they are sure to have them this weekend, as well. Zinnias are coming back in spades, as are Sweet Williams, Coxcombs, and Asters. Prices vary, but I have seen bouquets for as low as $6.

Here is the menu for the Downtown SFC Market Dai Due Butcher Shop's Breakfast and Lunch at the Market:

Venison Weisswurst with sauerkraut, curry ketchup, and Miabock mustard on a roll;