A trio of taco joints spice up midtown 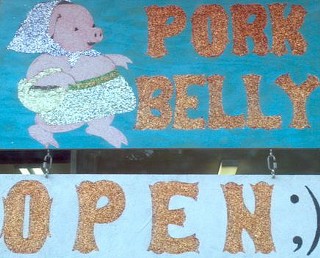 One of the glittering signs at Tyson's Tacos

Few things in Austin are as revered as tacos. Ann Richards ate tacos; Molly Ivins did too. They inspired one of Willie Nelson’s most poignant love songs. Some even say Elisabet Ney devoured al Pastor before immortalizing Sam Houston. It’s a wonder the streets aren’t paved in tortillas. Austin never seems to get its fill.

Nowhere is this more apparent than the area around Airport and Northloop, where four taco belles are currently vying for domination. Tamale House is the grand dame of the bunch, still going strong with its ageless combo of hard-to-beat prices and consistent quality. In the last two years, however, the area has blossomed into a tacotopia. One can get anything, as long as it’s wrapped.

The most recent entry is the Taco ‘Bout It (701 E. 53rd) trailer near North Loop. Perhaps because it is new to the scene, it is a little shy. The hours of operation seen to be random, like that mysterious fortune telling machine in Tom Hank’s Big. Sometimes you'll drive by and find a darkened lot. Other times, a wind blows and the next thing you know you are waking up in too-tight pajamas.

The showpieces on the menu are a pair of tacos featuring feather dusted fried chicken. In the Holy Mole, the chicken lurks in a complex sauce, topped with sesame seeds and dotted with queso fresco. The Texican dresses the chicken in fish taco drag – chipotle cream and avocado dolled up in a cabbage boa. Take the menu suggestion and add mango.

Those more adventurous will want to explore the tacos served on slightly sweet toasted Hawaiian buns. The Mexican Bun Dog plays on the idea of a sausage wrap, while the Kim Lee BBQ pairs Korean pork gogigui with the pucker of kimchi. For vegans, the Black Bean Mushroom could use a bit of texture to help it escape its autumnal murk. But the Sweet Potato Avocado rises above with sweet potato fries and hummus – a rare example of fusion being more than a parlor trick.

Down the road, the Vegan Nom (120 N. Loop) carries on the proud tradition of Sue Davis’ Counter Culture trailer, which once graced the same parking lot. The trailer has a deft way with meat substitutes, largely eschewing the designer imposter sponginess that plagues most commercial vegan proteins. The vegan chorizo, available in breakfast tacos and the superlative Bean Diablo, has the heft of its pork cousin without the grease. The Vegan Jalisco, with a base of “chicken faux-jitas,” smolders with extra oomph provided by grilled onions.

The highlights, however, come from the tacos that feature single vegetables. The Grilled Avocado Reale unexpectedly draws out the creaminess of the avocado by contrasting it against an alfalfa sprout crunch. Better still is the Nom’s Maple-Miso Sweet Potato, available through the end of the month. The taco is gorgeous, glistening like a cicada wing, with nutty miso and woodsy maple drawing out harvest warmth. You’ll want to approximate the idea for your Thanksgiving table.

The one quibble is that a few of the offerings are aggressively saucy. The Creamy Salsa Verde, Creamy Roasted Chipotle, and Fresh Salsa Roja are all terrific, but get muddled when all combines, as in the Rockin’ Vegan Migas. The sauces also make for a very messy eating experience. Keep paper towels on standby.

On Airport, Tyson’s Tacos (4905 Airport) dipped the Jalapeño Joes location in a craft store’s worth of glitter. The former burger shack’s covered dining patio has been upgraded too, with tin can planters and rustling flags. It’s all about old Austin quirk combined with new Austin sophistication. On a recent visit, the soundtrack featured several interpretations of “The Girl From Ipanema” punctuated by a bit of Daft Punk.

The menu echos the eclectic surroundings, with subtle tweaks to taqueria classics. The Pork Rib al Pastor uses a pineapple pico de gallo. Another taco pairs richly marbled pork belly with mandarin oranges and a fried parsley crumb. The Blackened Mahi Mahi is embroidered with sriracha aioli. The Cremini Taco is a moment of genius. Brussels sprouts poke out of a pumpkin seeds, queso fresco and crema peat.

The menu also lists plenty of diversions from the main taco fare, including elotes, a picadillo empanada, and jicama crudite. But a little editing might be in order. Some dishes, like the Avocado Carpaccio, are essential. It’s melange of grapes, mango, and studded serrano peppers is perfect for a light lunch. Other dishes, although well-prepared, seem unnecessary. Caesar salads and burgers may sate finicky palates, but a focused kitchen prevents shortages and timing issues.

Still, that’s a minor concern. All three of midtown’s taco joints carry out Austin’s fine taco tradition. If they are ramshackle, that doesn’t take away from their considerable pluck. More established players might want to take notice. There are barbarians at the gate. 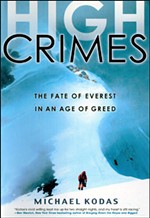 Tale of the Lion Tamer
Former WWE wrestler Chris Jericho's autobiography, released today, talks about the art that makes choreographed entertainment out of a sport.