Grateful for Alamo and Craft Beer

Ask the most loyal fanbase in music history to suggest a special ingredient for craft beer, and the answer is granola.

Dogfish Head Craft Brewery teamed up with The Grateful Dead to produce a small-batch Brewpub Exclusive Imperial American Pale Ale inspired by the best suggestion and its story. The beer, American Beauty, premieres in Austin today, Tuesday October 22, at Alamo Village during a special screening of The Grateful Dead Movie.

Over 1500 submissions poured in, many tinged with show memories of dancing bears, food from Shakedown Street, and fancy fungi. The winning crunchy munchies suggestion came from Thomas Butler (chemist and home-brewer), who shared the memory of his first Dead show: His dad threw him over the fence and into the show when Butler was 9 years old. As mentioned in the full final ingredient story here, “Granola was the main course in millions of parking lot meals, and [Butler and his father] both agreed it would be a sweet and toasty complement to the pale ale’s all-American hops and barley.”

In a wicked twist, Dogfish Head started in 1995, the fateful year that Dead Heads lost their beloved leader. The Delaware craft brewer has a long history of using strange flavors in their special brews, and describes American Beauty as “brewed with all-American malts and hops, granola and little bit of soul. It's malty with a big hop kick, and notes of toasted almond and honey round out the flavor profile and balance out the hop bitterness.”

The 1977 concert film, co-directed by Captain Trips himself – Jerry Garcia, offers footage from the band’s 1974 five-night Winterland Ballroom set and highlights the colorful, dancing, and dedicated culture of Dead Heads. The pale ale is named for the Dead’s 1970 album, American Beauty, which ranks 258 on Rolling Stone’s list of 500 Greatest Albums of all time.

We’ll drink to that, Sugar Magnolia. 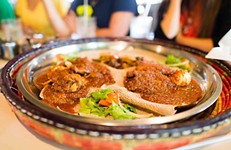