By popular demand, a haven for people looking for beer alternatives

The new 20,000 square foot, metal roofed Barton Springs Beer Hall is a welcome addition as part of the new layout of the ACL festival grounds. The biggest draw, aside from plenty of shade, is the list of craft brews containing 15 selections from across the country. 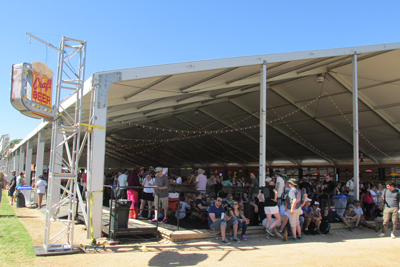 The Barton Springs Beer Hall and sports bar is a welcome addition to ACL festival grounds. (Photo by Will Larson)
Representing Central Texas are Real Ale's Fireman's #4, Hans Pils, and Four Squared, which competed with the likes of Lagunitas IPA, Alaskan Amber, Brooklyn Lager and Sierra Nevada IPA for the most requested brews. The list even includes Ace pear cider and Woodchuck apple cider for gluten-free drinkers. Oddly enough, festival sponsor Bud Light managed to get on the craft brew list, as well. 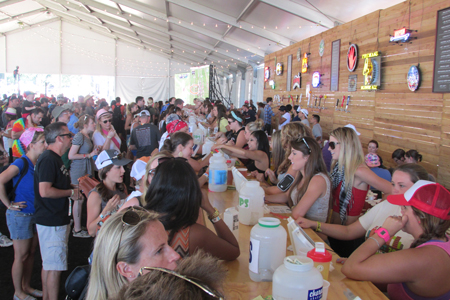 The friendly bartenders were busy throughout the weekend, but the lines were never too long. (Photo by Will Larson)
The Beer Hall was always packed, although the lines were never long, thanks to the well-staffed counter and friendly bartenders who were always willing to answer questions about the beers. Visitors from out of town were curious to taste our local offerings, the bartenders told us. However, the $8 price tag for a 12 oz pour in plastic cups (even Bud Light) was like a built-in self-control tool.

Aside from cocktail tables peppered around, there were picnic tables so people could bring in their food and enjoy it under the shade with a nice craft brew. On Saturday and Sunday, however, the picnic tables were packed with football fans watching on the two large screens. I guess ACL really does offer something for everyone. 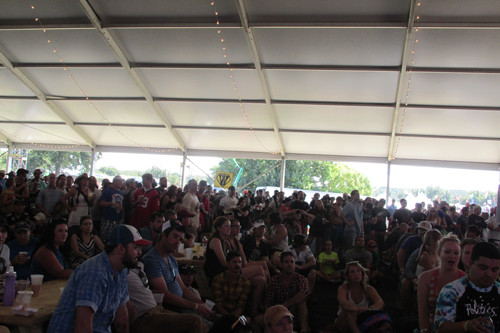 No, they're not watching a band. They are transfixed by the Ravens vs Dolphins game. (Photo by Will Larson)

Despite the price tag, the crowds certainly appreciated having a choice of better beers to drink, myself included. 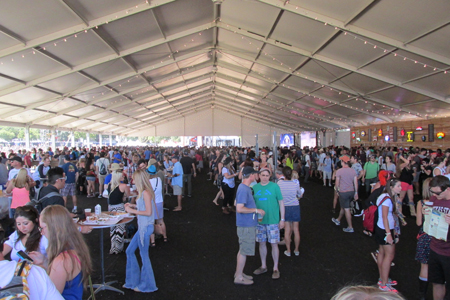 The new Beer Hall makes a good meeting place to catch up with your friends. (Photo by Will Larson)