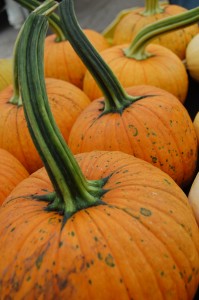 So much news! Pie pumpkins and jack-o-lantern pumpkins are beginning to show up at the markets. Pumpkins have a fairly brief season around here, so buy them early. They will stay in good condition as long as you don’t cut them until the day you plan to make your pie, curry, soup, or Jack-O-Lantern.

Farmer John at 2 Happy Children Farm will have sweet corn this Saturday at the Barton Springs Market. As far as I know, he is the one and only farmer who has ever attempted this (autumn sweet corn) and succeeded. He told me last weekend that he should have it for four Saturdays in a row, this one being the first. 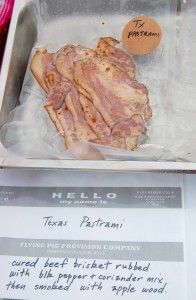 Flying Pig Provision Company has added sliced ham and pastrami to their lineup of smoked meat. I have been totally blown away by their Italian Style Bacon, Ancho Chile Bacon, Smoked Turkey and Ham; the flavor is unbelievable. Their bacon also keeps for a long, long time, I guess the old-fashioned smoking process really preserves the bacon, just like in the Nineteenth century. Caeda Farm is out of the flower business until spring; but their Sugar Cube melons are nearly as gorgeous. These little cantaloupes are the best-tasting melons of the whole year. I think I am going to buy some as gifts this Saturday to give to friends, they are that good. Caeda has also been selling squash blossoms, for those who like to make squash blossom soup and stuffed squash blossoms. 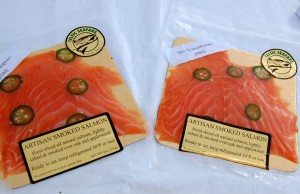 Celtic Seafare has a new product this week: Jalapeño Lox. What a perfect flavor combination for Texas-made lox. (Is there anything that isn’t improved by jalapeños? I think not.) On a toasted bagel with Full Quiver Farms cream cheese, it is a breakfast from heaven.

Tomato production was down last week due to the high temperatures. There will be tomatoes at the markets this weekend, but the plants probably won’t entirely recover until the cold front gets here and takes the temperatures down into the 80’s. These last few weeks of 90˚+ weather have been hard on all the nightshades, in spite of the rain. J.J.'s Good Things (sold at the Richardson Farm table at Barton Creek Market) has a new batch of both red and green salsas for sale, and new labels too.

The Sunset Valley Farmers Market will be held this Saturday as usual, but it will be moved over to the other side of the Toney-Burger Center parking lot to make room for the marching band finals. Last year the Farmers Market was not held there during Marching Band Finals, but this year Sunset Valley decided that they didn’t want to lose the market for even a day.

IO Ranch Lamb has lamb sausage again, at Sunset Valley and Downtown. This is a delicious rosemary and lamb sausage that is great with any of our local sauerkrauts (Full Quiver Farm [Barton Creek], Straight From the VIne [Downtown], Dai Due [Mueller and Downtown]). 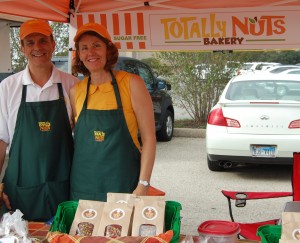 Dewberry Hills Farm (Really Good Chicken) will be taking up the slack by being at both Sunset Valley and Downtown this Saturday, with plenty of "really good chicken that tastes like chicken".

Even though ACL is this weekend, the Downtown SFC market will have dibs on both of the adjacent parking lots for farmers' market shoppers to park in for free, so don’t let the specter of an ACL-induced lack of parking keep you at home. 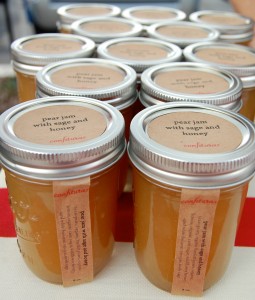 I have been watching the Confituras table to see when Stephanie was going to make something with our native pears, and it is finally here: Pear Jam with Sage and Honey. Confituras is the gold standard of jams and jellies, and this one is amazing. There are three new vendors at Barton Creek Market. The first one is Totally Nuts Bakery, who sell gluten-free, grain-free, and sugar-free baked goods made with nut flours. I sampled their macadamia nut cookies last weekend and they were terrific: chewy, rich, and not too sweet. These nut-based treats are a real boon to gluten-sensitive folks, and are just plain delicious. (I think they might even be okay for folks doing the Paleo Diet!) Lone Star Nursery is another new vendor. They are currently selling plant starts for the fall garden, and have a very nice collection of broccoli, cauliflower, and collard starts, all of which are planted during October. I wish my beds were weeded and ready. I might buy early just to make sure I get some. The last new vendor isSavory Spice Shop, whose first Saturday will be this one. They plan to sell organic spices and extracts, including over twenty seasoning blends, freshly ground on a daily basis. (I wonder if they will have vanilla?) 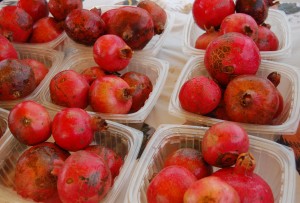 Lettuce is just beginning to show up at various markets, and maybe, just maybe, the soft persimmons are going to arrive soon.