As the sun set over the Hudson River Saturday, the first ever Smoke@ICC competition kicked off the 8th Annual StarChefs International Chefs Congress. The invitation-only event featured teams from across the country but our focus was the teams from Austin, San Antonio, and Houston, because barbecue bragging rights were at stake. 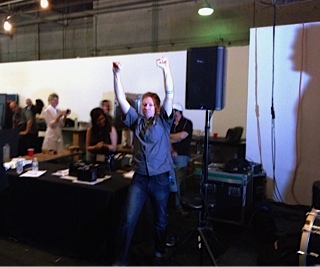 Five barbecue figureheads manned the judging table at the first year event: Dave Anderson of the Famous Dave’s restaurant chain; Kenny Callaghan of Blue Smoke in NYC; Andy Husbands of Tremont 647 and South Sorel in Boston; Brad Orrison of The Shed in Ocean Springs, Mississippi; and author and TV chef Steven Raichlen of the PBS series, The Primal Grill. The prizes: a $12,000 Southern Pride Smoker, a trip to Korea for the entire team, and the chance to compete in the World Food Championships in Las Vegas. 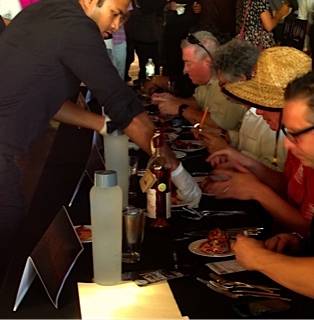 The Texas teams included Josh Watkins and a group from Austin’s The Carillon, the fine dining venue in the UT/AT&T Executive Education and Conference Center on the UT campus; Jason Dady and the staff from his Two Bros. Barbecue Market in San Antonio; and Ronnie Killen and the guys from Killen’s Barbecue in the Pearland suburb of Houston.

Team members waded through the crowd with serving trays loaded with delicious-looking eclectic plates for the judges-only categories. Those entries were for the Regional American (quail), New World (lamb), Asian Barbecue (pork), and best in show categories (beef). The latter involved a Grand Champion prize as well as a Reserve Grand Champion (runner-up) prize.

We only sampled one dish from each competitor and had the power of casting a vote for People’s Choice champion. These smoky entries were all crafted from Australian Wagyu beef brisket. Judge Andy Husbands explained Waygu is one of the best briskets on the market for cooking. Why? The marbling. Everyone, of course, cheered for the details of beautiful fat that melts into the beef as its cooked “adding deliciousness throughout the meat.” 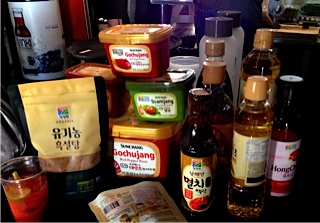 The biggest component of that prep work was the use of Sunchang Gochujang, a red chile and fermented bean paste product from event sponsor Chung Jung One. The mandatory use of this product forced the chefs to turn out interesting dishes that combined traditional barbecue with Asian flavors. The Carillon’s Josh Watkins described the spicy red Korean condiment paste as a combination of Sriracha and red bean paste.

The Carillon chef de cuisine Chris Andrews, pastry chef Plinio Sandalio, and volunteer Samantha Whitlam rounded out Watkins’ team. For this crew, the Gochujang – and their other brisket-complements – were the key to success. Austinites know these guys as masters of innovative fine dining. Dressed in chef’s whites with a turquoise bandana around his head, the Executive Chef explained what a fine dining team was doing at Smoke@ICC.

“I am doing barbecue refined,” Watkins stressed. “Barbecue is rustic in technique and I want it to remain rustic; raw preparation, but not in garnish. Sweet, sour, spice, fat – I’m making a full flavor profile with garnishes. Completing the profile.” The Carillon’s stall was serving, what else? Tacos, of course. Watkins told us the brisket was first smoked and then braised for three days in the Gochujang before being shredded. The chefs filled each flour tortilla with barbecue, a bit of tart cabbage escabeche, and a hint of cilantro. With a great deal of gusto, Watkins topped the dish with a smoky, creamy queso. “Because why?” he asked rhetorically. “We’re from Austin.” The crew also whipped up an umbrella-capped Bloody Mary featuring the Korean condiment, making the perfect subtly spicy drink for enjoying with a brisket taco. 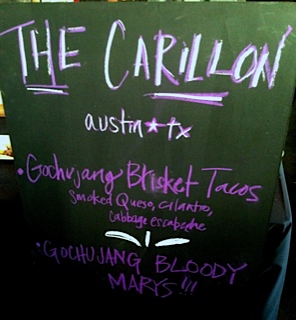 Sign at the Carillon booth (Photo by Eli Gay)

Who’s Your Dady?, the team led by Jason Dady of San Antonio’s Two Brothers BBQ, incorporated even more Asian flavors than the required spread. The crew plated perfectly square bites of brisket that had a tamarind glaze and were topped with umami salt. The result was a deeply flavorful morsel with a hint of sweetness. Dady said he was not daunted by the nontraditional flavor concept for barbecue. Rather, the biggest challenge in the competition was “getting 200 pounds of food here.” 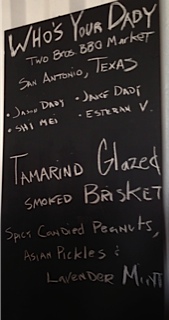 The Who's Your Dady? sign (Photo by Eli Gay) For any one who questioned these creative spins on barbecue, judge Dave Anderson gave a definitive answer: “Elvis is dancing on my tongue.”

After the judges’ hour and a half feast, the kind of entertainment that could only happen at a barbecue event began: a live butchering session. A portable stainless steel table replaced the judging area and StarChefs introduced Elias Cairo, co-owner of Portland’s Olympic Provisions Charcuterie. A last minute change in plans put a lamb instead of a goat on the butcher block. Even so, the 2011 Rising Star Chef quickly, and with very little hesitation, butchered the lamb. Bone saw in hand, Cairo kept a running narration of which cuts he was slicing. The meat-curing master also demonstrated how he would turn the lamb leg into prosciutto – a delicious sounding salt and rosemary preservation process. 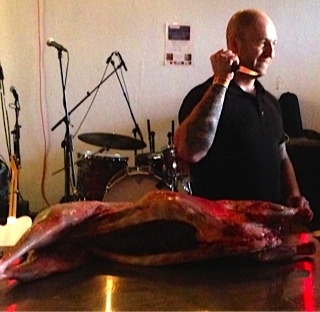 Before the winners were announced, StarChefs shared a little insight into the judging process. Judges awarded points for taste, tenderness, presentation, creativity, and “pure culinary chutzpah.” The Kansas City Barbecue Society, the official sanctioning body for barbecue competitions, was on hand to ensure fair judging. KCBS Executive Director Carolyn Wells, who Dave Anderson described as “one of the founding mavens of BBQ,” could be seen wandering through the facility all evening, keeping a close eye on the score sheets.

Finally, with barbecue teams huddled in clusters on the edge of the stage and their fans grouped up front, the big winners were announced. It was no surprise that Texas teams claimed spots in every single category and garnered top honors.

Plenty of shouts and catcalls erupted as People’s Choice and Reserve Grand Champion were handed to Jason Dady’s team. As for Dady, he summed up his feelings succinctly. “The goal was just to make Texas barbecue and make Texas proud,” he said. “And not to go back to Texas getting my ass kicked.”

When the Grand Champion prize was announced, however, it was the Austin crew’s turn to erupt. Watkins, Andrews, Turner and Sandalio exchanged joyful bear hugs and hoisted their Grand Prize Travel Certificate in the air. The winning Carillon team with their award (Photo by Eli Gay)

“This is representative of my future,” Chef Watkins described his gold first place tacos. With the new KCBS competition model smoker, he will be able to keep experimenting with barbecue and upgrading the genre with his playful garnishes. Watkins and the Carillon team intend to take their A-game to the World Food Championship in Las Vegas Nov. 7-10. Other contestants better look out.

Writer Elizabeth Childers developed a taste for barbecue in her native Alabama and is currently a journalism graduate student at NYU.