After Austin's Lenoir was named one of Bon Appétit’s Best New Restaurants of 2012, chef/owners Jessica Maher and Todd Duplechan were approached by the James Beard House to host one of its famed dinners. Lenoir was there Saturday, Sept. 21 and I was assigned to cover it. A tough job, as they say, but ... 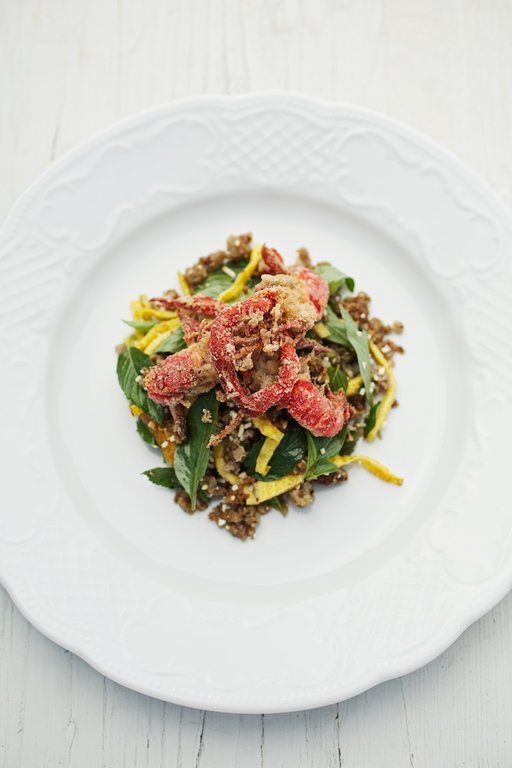 One of the most important things to understand about presenting a Beard House dinner is that chefs who accept the invitation receive no portion of the ticket sales (over 70 guests attended Lenoir’s event), and must cover travel expenses for themselves and any staff members, as well as food and beverage costs for the entire multi-course meal. In the end, the dinner itself is extremely costly for the host chef, but according to Maher, the honor and exposure that come with being asked to host the dinner make it well worth the effort, and the cost.

When I arrived early to meet them, Jessica and Todd had been ready since 2pm. Thanks to the married duo’s meticulous planning, everything was in place and ready to go. “I just knew with my personality that if we winged it I would have a nervous breakdown,” Maher said, “so I have lists upon lists of everything that needed to be bought and needed to be prepped.”

To hear Maher tell it, the planning began as soon as they accepted the offer. They needed to pick a date three months in advance and eventually settled on Sept. 21 because not only would the ingredients they were looking to serve be in season, but also, the restaurant would still be able to run smoothly in Austin with a majority of its management gone.

“We knew the restaurant would still flow in September because it’s still hot in Austin, and people are coming off of summer and eating less because of the heat,” Maher said. “We knew it would be a good time for us to come up to New York City and take advantage of the farmers' market and cooler weather.”

Lenoir is known for using local ingredients whenever possible, so in order to bring their restaurant experience to the Big Apple, Maher and Duplechan made many a call to airport TSA to ensure that their cooler filled with native Texas proteins such as soft shell crawfish and antelope would not be confiscated. Local New York ingredients were purchased the day before the dinner at the Union Square Green Market.

Prep work was done at Bark in Brooklyn because co-owner Josh Sharkey is a friend of the pair from their days working in former New York City restaurants such as Café Gray and Tabla. On Saturday morning, a cab was loaded up with all of the food (including mint marigold ice cream that Maher transported using dry ice) and barreled through the streets of Manhattan to the James Beard House. “I think there is no way to get around the sheer insanity of having to bring your restaurant experience to an entirely new state,” Maher said. “Especially to a really big foodie audience and still be true to what you are doing.” 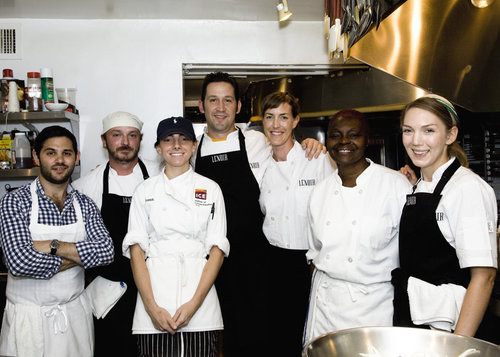 Built in 1844, the James Beard House in the West Village is literally where Oregon native James Beard lived during his time in New York City. One of the dining tables is set up in Beard’s elevated bedroom where, if diners were to look up, they would see a mirrored ceiling. Another table in the glass walled dining room is adjacent to a shower head where the very tall, portly, and bald Beard sometimes bathed in full view of his neighbors.

A small courtyard in the back of the house served as an area for socializing, drinking, and snacking on appetizers before the meal. I met a woman who divides her time between living in Austin and New York. She told me that when she saw her favorite Austin restaurant was hosting a dinner in New York, she made all of her New York friends come out and try it. The woman was quite chatty until she popped an appetizer of toast with warm Gulf shrimp and persimmon into her mouth, then she fell silent. 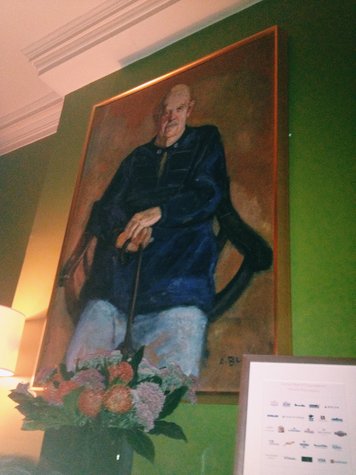 Once summoned inside, I was assigned to a table next to a portrait of James Beard himself. My fellow diners were all James Beard Foundation members (or invitees of members) who have come here so often they know all of the waiters’ names. One woman estimated that she has been attending these dinners for twenty years. They have seen a litany of up-and-coming chefs go from cooking dinners here to becoming star chefs in the culinary world. They know good food, and they expect to eat it when they come here, especially for the triple figure price tag of each ticket. But we all agreed, the Lenoir dinner did not disappoint. The flavor combinations were unique and unexpected: fennel and seaweed salad with pecan butter, soft-shell crawfish, poha-crusted cobia with pomegranate, and almond and jaggery caramel cake with mint marigold ice cream. As each course arrived, the chatter quieted as guests savored every bite, only piping up once again to comment on the food before them. 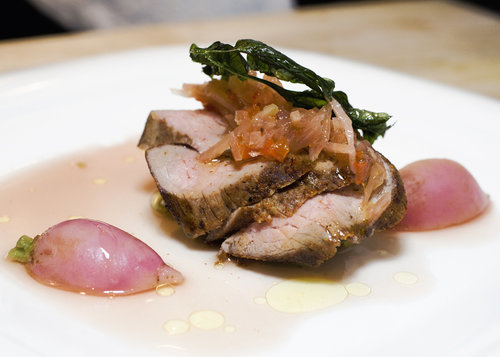 A diner at my table told me that though she has been a part of the James Beard house for decades, she had stopped attending dinners on a regular basis because she left stuffed and drunk (a different wine is served with each course). But surprisingly, after cleaning every plate of the Lenoir meal, all six courses of them, none of us felt overly full. The meal was understated, satisfying, and impressive. At the end of the dinner, Duplechan and Maher took questions from guests. One asked about why a protein as unique as antelope was on the menu. Duplechan responded that antelope was brought to Texas for big game hunting, but eventually escaped the private game ranches and became an invasive species. Serving antelope therefore is in keeping with the sustainable aspect of their restaurant. Another question arose about serving light fare in a state known for its heavy dishes, to which Duplechan replied that he prefers to make lighter food due to Austin’s scorching high temperatures. “We live in a hot place, so we need to eat for that,” Duplechan said.

And with that, a representative of the James Beard house thanked the chefs for serving their food in the historic venue. As I left, I overheard someone saying, “If I ever make it down to Austin, I know where I’m going be to eating!” Lucky them.

Jessica Lee is a homesick Texan in NYC who keeps in touch via this blog from time to time. 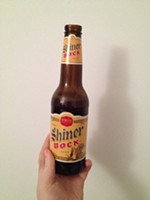