How Do You Define Soul Food?

"What’s the difference between Southern food and soul food?” That is a question I hear a lot. My answer is always the same: Depends on whom you ask. 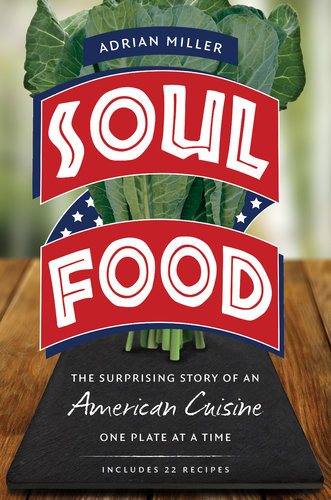 In 1969, Jim Harwood wrote in The Soul Food Cook Book: “Soul food takes its name from a feeling of kinship among Blacks. In that sense, it’s like ‘Soul Brother’ and ‘Soul Music’ – impossible to define but recognizable among those who have it. But there’s nothing secret or exclusive about Soul Food.” The same year, author Bob Jeffries expanded the meaning, contending in his book, also entitled The Soul Food Cook Book, that the catalog of soul food dishes is long and varied, distinguished from Southern food by economics, nothing more. Cookbook author and former cooking show host Vertamae Grosvenor defined the black cooking style this way in her book, Vibration Cooking: or, The Travel Notes of a Geechee Girl: “It seemed to me while certain foods have been labeled 'soul food' and associated with Afro-Americans, Afro-Americans could be associated with all foods.

Soul food had its roots in Southern cuisine, and Southern cuisine was a rich culinary tradition born out of necessity and innovation. African-American cooks created the Southern style as “an amalgamation of African, European, and early American resources and preparations.” It harkened back to “hog killing time” with emphasis on eating all parts of the pig. And, it was based upon economy, whatever was at hand. But the soul food catalog often omitted the varied aspects of country cooking on farms where dishes were based on fresh fruits and vegetables from the garden or fresh buttermilk delivered by the family cow. As a result, soul food became a signifier for “slumming,” re-energizing a long-standing debate that had quietly raged about black foodways as a demarcation line between the middle and lower classes, as well as the races.

After a decade of investigating the complex history of soul food, writer and attorney Adrian Miller has delivered an intelligent review that explores the muddy territory “where southern food ends and soul food begins.” The journey is as informative as it is entertaining.

We join Miller as he romps through archival materials, cookbooks, slave narratives, and150 soul food restaurants in 35 different cities with one mission in mind: to expand our understanding and appreciation for the variegated history of a distinctive, but maligned, culinary style. To do this, the author cleverly deconstructs the soul food menu, first providing a detailed overview that traces the origins of soul food to West Africa. He unearths regional and ethnic influences and observes the impact of slavery, migration, and civil rights on the African-American cuisine.

What comes next is a deep dive that goes well beyond just celebrating legends and traditions. Miller stirs the pot with a mix of facts and quips that survey the politics, religion, and economics associated with soul food’s most iconic dishes: fried chicken, catfish, chitlins, black-eyed peas, macaroni and cheese, greens, candied yams, cornbread, hot sauce, red drink, and soul food desserts. Twenty-two recipes are included, too.

Miller reviews the truths behind various stereotypes that “yoked” chickens with black people and religion. He calls his foray into the Sunday dinner practice of serving the choicest fried chicken parts to the preacher and to church social events “the integration of church and plate.” He marvels at the Gospel Bird’s sacred role in West African tribal mythologies, contemplates the origins of the famous combination of chicken and waffles, and distinguishes Maryland fried chicken from Virginia’s brand.

The chapter Catfish and Other Double Swimmers, links the soul power of catfish to the fish fry ritual and to West African preferences for smoked fish, but it is the insider’s tip about buffalo fish that will astonish soul food outliers. And, “it’s not a race thing,” Miller assures. “Buffalo is a large fish that always lives in the mud, and it tastes like catfish. Catfish lovers have long substituted buffalo when their favorite fish is not available. … It is extremely bony, which limits its popularity outside soul food circles. Soul food cooks have gotten around that boniness by creating fish ‘ribs,’” he reports.

Miller rhapsodizes about the European predilection for chitlins and the camaraderie they evoke once you “get the stank out.” He sketches various cultural and ethnic rationales for eating black-eyed peas on New Year’s Day for luck, contemplates the aversion to long-simmered greens cooked with pork, and relies upon economics to explain: “How Did Macaroni and Cheese Get So Black?”

At the end of it all, Miller’s absorbing story-telling is a passionate call to save soul food from extinction, ironically at a time when its principle ingredients (think pork belly, cheeks, and ears) are decorating plates in upscale restaurants, prepared by hip white chefs. 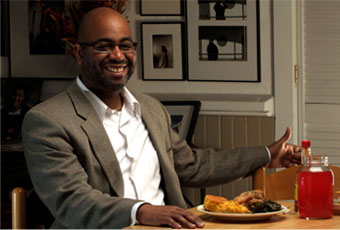 “More of us need to shed soul food’s negative associations,” Miller contends, “and learn its history, in order to appreciate it.” And that takes us right to the beginning and the Southern-soul conundrum.

To resolve that question, I defer to renowned New Orleans chef/owner of Dooky Chase restaurant, Leah Chase, who once told an audience: “Ours just tastes better.”

Toni Tipton-Martin is a respected food and nutrition journalist. This review is partially excerpted from her upcoming book, The Jemima Code (University of Texas Press, 2015). 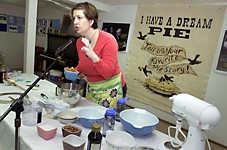 Peace Through Pie
Bringing the community together around the table 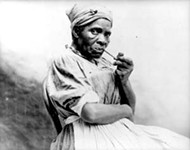 Who Is Mandy?
The author hopes that history – so cruel to African-American women in the kitchen – can help breathe real life into a 19th-century portrait