By now, many Austinites know that Home Slice Pizza partially shuts down every September so members of its staff can make a pilgrimage to New York City. They eat and drink at some of the most authentic purveyors of N.Y.-style pizza in its home environs. Everyone lucky enough to attend will tell you that the trip is informative, inspirational, and fun. This year, from September 9-12, some thirty employees, including co-owners Jen Strickland and Terri Hannifin, dined at a dozen or so pizzerias (and one Italian street festival) over a four-day period. I was amongst them, and let me tell you: never before have I so readily accepted an assignment. It’s a safe bet the slices consumed number in the high-hundreds.

It’s a blustery afternoon in Bensonhurst, an area of Brooklyn that still looks like the Brooklyn you see in gritty Seventies films set in New York: elevated train tracks, age-worn bodegas, chatty cabdrivers. There’s a large Italian-American community here, and for generations it has coalesced around the slices and ices at L&B Spumoni Gardens. A compound of buildings with spacious outdoor seating, L&B is most famous for its Sicilian pies: hefty square-shaped slabs of crust, with a layer of mozzarella beneath the tomato sauce. I’m waiting here when a large white bus pulls up, sighs to a stop at the curb. The doors part, and out come dozens of people, in waves of plaid. It can only be the Home Slice crew. 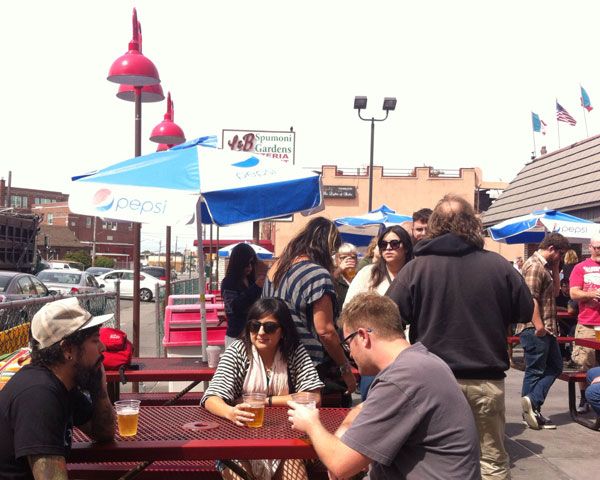 The group commandeers four red perforated picnic tables. They’ve come straight from JFK Airport and are starving, the only time that will happen on the trip. Hannifin introduces herself by telling me they’re going to order “some regular pizzas, some Sicilian pizzas, chicken parm, and a bunch of beer,” and would I like any of that? I begin to think I’ve under-prepared because I ate breakfast.

While we wait for the pizzas, Jen Strickland begins telling me about the origins of the annual New York trip. “Most of the people who are working for us have no frame of reference for this style of pizza,” she says. “There are basically no Italian immigrants in Austin. No corner pizza shops.

“Last year, we did Sicilian slice crawls,” she continues, “and then spent a year perfecting our own.” The result was Home Slice’s new Sicilian pizza (slogan: “Get Hip to the Square”), which is available on Mondays. “It’s fun to bring a food that no one has in Austin.”

Strickland grew up in upstate New York and attended college at New York University, where she spent four years “eating slices” that would later inspire her to open her own New York-style pizzeria. While at NYU, she met Terri Hannifin, originally from Denver, and the two became college roommates, best friends, and future business partners. They opened Home Slice, along with Jen’s husband, Joseph Strickland, in 2006.

Our conversation is halted by the arrival of the pizzas, and slices are passed around, cut in half, and quickly devoured. It basically goes like this all week. I was skeptical that an all-expenses-paid pizza vacation to New York City could actually be, you know, educational, but intelligent discussions span from table to table, and at every stop, two Home Slice employees work cooperatively to fill out extensive-looking pizza and service reports, for the benefit of us all: the pizzeria is going to put out a Home Slice Guide to NYC Pizza sometime in the future. The L&B slices are very cheesy, with a slightly-sweet sauce and chewy crust that someone describes, not uncharitably, as “Bisquick-y.” “If I were a five-year-old kid, this would be the best birthday slice in the world,” says kitchen manager Phil Korshak. “But the dough doesn’t have the crispness that I think dough should have.”

Nevertheless, none of the pizza remains at the end of lunch. I part ways with the group, agreeing to meet up with them tomorrow. For dinner, they eat at Lucali, a cozy, candlelit joint in the Carroll Gardens neighborhood of Brooklyn. Many in the group later say that the rustic, brick oven pies made by Lucali’s pizzaiolo Mark Iacono are the best in the city. (Strickland even wrote an article for the Huffington Post about the experience).

Again and again, the people in charge at Home Slice stress the importance of good service; it seems second only to the actual pizza in the restaurant’s hierarchy of values. When I reconvene with the group the next night, at Denino’s Pizzeria & Tavern in Staten Island, we get an object lesson in hospitality.

Denino’s has been family-owned and operated since 1937. It looks like your standard, casual suburban dining establishment: arcade games in the lobby, TV sets tuned to baseball games in the large barroom area. When the Home Slice group walks in, an elderly woman yells out Terri’s name from across the room--it’s one of the co-owners, a woman named Addie. Home Slice often stops at Denino’s on their New York trips, and the staffs have become friendly with each other. “Some Texans came in the other day,” Addie says to Terri. “I asked them, ‘Do you know about Home Slice?’” 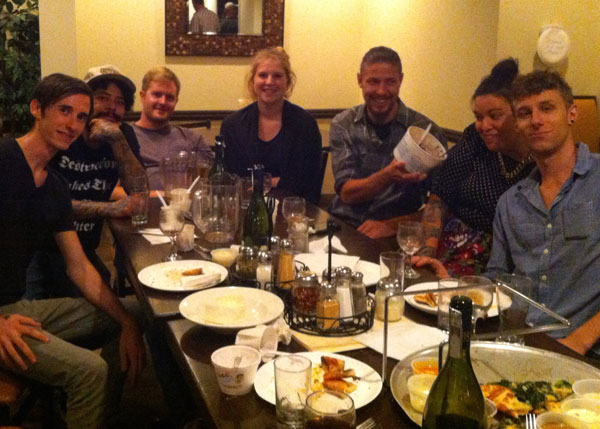 Seated at two large tables in the back dining room, Strickland tells me that the first time Home Slice came to Denino’s, they were the only ones there “as anthropologists.” Meaning no pizza connoisseurs, no tourists. “It was all families from the neighborhood. And it was packed!”

“The oven is the heart of the house, and you want the pizza shop to be that for the neighborhood,” adds Phil Korshak, the kitchen manager. “It was immediately evident that this place was just that.” Korshak has been at Home Slice since the beginning. He sports a scraggly red and grey beard, speaks in fully-formed pearls of epicurean wisdom, and possesses an infectious joie de vivre.

He lived in New York for a spell and is full of tales about eating great pizza and learning from master pizzaioli, like Di Fara’s Domenico DeMarco, the septuagenarian Brooklyn chef who still makes a hundred or more pies per day and will close his pizzeria when he’s not available. Korshak reminisces about pizza the way some people wax nostalgic about a punk-rock youth.

When he interviewed with Strickland, back in 2006, he says they immediately hit it off. “When we opened, it was just the two of us on the line [in the kitchen],” he remembers. “When you work alongside someone like that, it takes fluidity. Normally, I’m like a bull in a china shop. But then I became Baryshnikov.”

The pizzas arrive: a white clam pie, a broccoli rabe pie, and a M.O.R. (meatball, onion, ricotta) pie. The thin crusts had a perfect exterior crunch and a doughy interior, and the sauce was piquant and flavorful. There is much joviality. At one point, Hannifin rises to make her second toast of the evening: “How weird is it that all of you are so interesting!,” she says. “Here’s to you guys all being so likable.” An hour or so later and midnight’s behind us, the restaurant has officially closed, and Addie is playing all the Texas songs on Denino’s jukebox--spurring a little two-step from general manager Nano Whitman--before the group boards a charter bus back to their Manhattan hotel.

On Wednesday, the crew eats at Eataly, the high-end Italian mini-chain owned in part by Mario Batali (rave reviews all around); Shake Shack, which Whitman says was originally added to the itinerary a couple of years ago, when Home Slice was exploring ways to operate a quality takeout place with great customer service; and Lombardi’s, the first licensed pizzeria in the United States, and the training kitchen of many pizza masters who would later open world-famous restaurants of their own. Thursday afternoon is the 87th Annual Feast of San Gennaro, which began in 1926 as a one-day religious commemoration of the patron saint of Naples but is now an eleven-day street festival marked by parades, live entertainment, and an obscene amount of fried food and sauce-bedecked carbohydrates, sprawling across Little Italy. The festival’s organizers proudly flaunt a “world-famous cannoli-eating competition!” For the uninitiated, cannolis are tube-shaped shells of fried pastry dough, filled with a ricotta-based cream. This year’s winner crams down thirty-two of them, at an unsightly pace. “It’s the kind of sport where when you win, you really lose,” observes Travis Tehas, a manager at Home Slice’s takeout location, More Home Slice. 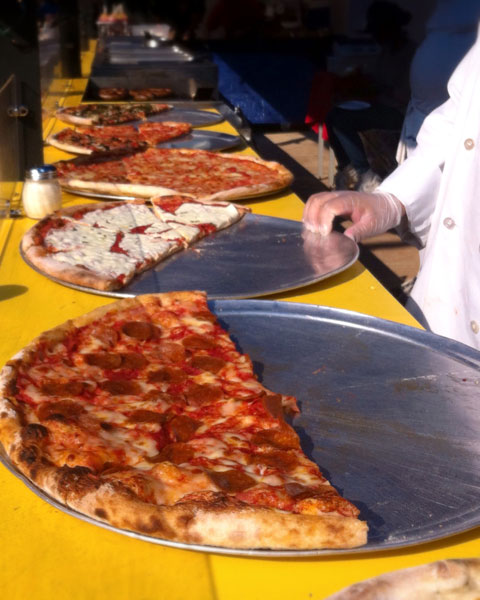 A few days earlier, Hannifin told me that one of the first nights she hung out with Strickland, back in college, was at the festival. And there is loads of fun to be had here: the cheap wine, the bowls of pasta and table-sized pies at the pop-up restaurants, the bacchanalian carnival atmosphere, the junk food (one representative booth sells fried Oreos, fried Reeses, fried Twinkies, fried Nutter Butters, funnel cakes, and Dippin’ Dots).

“You can’t discount anything corny or hoakum--that’s good!” says Korshak, who, two full days before the festival, is clearly the most excited. “Anytime there’s a cannoli-eating contest, that’s good. The fact that the San Gennaro festival plays a pivotal role in the Godfather, that’s crucial.”

The last stop on the Home Slice 2013 tour of New York is Rubirosa, a homey pizza-and-fresh-pasta joint on Mulberry Street, in the Nolita section of Manhattan. If the trendy clientele and handsome wood and tin decor hint that Rubirosa is an a la mode restaurant, the thin crust pizza recipe used chef and co-owner Angelo Pappalardo and his father, Giuseppe, suggests something more generational.

Rubirosa’s friendly staff has us seated in a rear dining room, and they never let a wine glass go empty. They’ve created a conspicuously pizza-free menu specifically for this group: calamari fritti with spiced tomato sauce; black & white tagliatelle with clams, mussels, shrimp and scallops; rigatoni with sausage ragu; eggplant parmigiano; spinach campanelle with garlic cream sauce. Still, Hannifin can’t resist ordering some pizzas, which come out with ultra-thin, crispy crust and a vibrant vodka sauce. All of it is delicious.

It’s the last night of the trip, so everyone’s feeling a bit sentimental, and a series of chest-swelling toasts are offered. Strickland and Hannifin go around the room, asking everyone to share the most inspirational aspects of their trip to New York, and the hardest. Most of the latter are hilarious accounts of New York misadventure; a couple of people mention comically peculiar encounters with the cannoli mascot back at the Feast of San Gennaro.

What’s clear to the outside observer is how much everyone likes everyone else--certainly more so than at any place I’ve worked. If one of their goals when opening Home Slice was to recreate the large-family atmosphere of a casual Italian restaurant, Strickland and Hannifin appear successful. Food is the best way to bring people together, after all.

“You can just tell when something has heart in it,” Hannifin says. We’re talking about the pizza, once more. “You taste this sauce, and it’s surprisingly good. I know that whoever made this gives a shit. Every step, every aspect of it was made with love.” Pizza slices at the Feast of San Gennaro (Photo by Kristen Leigh Knoll)
After seven years in Austin, Phillip Pantuso moved to Brooklyn in 2012 for grad school, but he still eats Texan when he can. 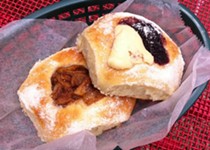