The HOPE Farmers Market will be hosting two New Mexico natives, who are bringing a second harvest of Hatch chile peppers to Austin from Wagner Farms in Hatch. The peppers will be roasted and sold at the Market both this Sunday and next Sunday. 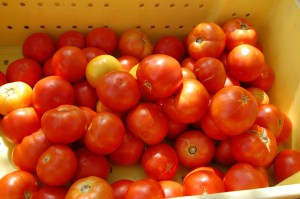 Premium Fall tomatoes from Ottmer's Family Farm (Photo by Kate Thornberry)
Celtic Seafare has recently been coming to the Barton Creek Market every Saturday (they used to come every other Saturday), but there is still alternation happening: Even-numbered Saturdays they sell hot-smoked and cold-smoked salmon, as well as make sandwiches and bagels; odd-numbered Saturdays, they just sell the salmon. If I have my Saturdays straight, that means that tomorrow they will be making sandwiches. I have always loved cold-smoked salmon, and ever since Celtic Seafare started up, I have bought no one else’s. But recently I finally tried the hot-smoked salmon, and now I crave it. The cold-smoked is like lox, and the hot-smoked is more like smoked trout. Both are fabulous. 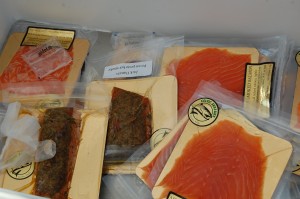 Hot- and cold-smoked salmon from Celtic Seafare (Photo by Kate Thornberry)
Lightsey Farms has hard cooking pears, hard green persimmons, a second crop of figs, and fresh dates. I didn’t even know what fruit the fresh dates were, because I have only ever seen dried dates (like most folks, I imagine). Fresh dates are red and cylindrical, and if I had had the money I would have bought some just to see what they are like. No more peaches and no more watermelon at the Lightsey tables, but soft red persimmons will be arriving soon. 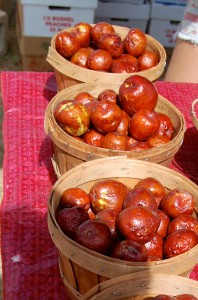 Fresh dates from Lightsey Farms (Photo by Kate Thornberry)
Remember how last week I said, “If you want to get a watermelon, you had better get one this weekend”? It turns out that I was speaking prophesy, because Lightsey’s, 2 Happy Children Farm, and most of the other farmers growing watermelons in these parts plowed them under this week for fall planting. You might see a few out there, but as far as I know (from asking), the only farmer who said he would have watermelon this weekend was STAR at Barton Creek. 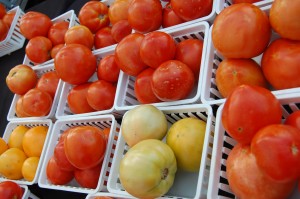 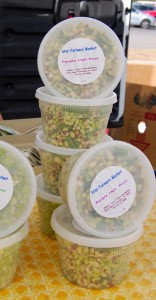 Fresh Cream peas from STAR at Barton Creek Market (Photo by Kate Thornberry)
Remember how that late freak hailstorm in April wiped out the entire Ottmer Family Farm? Not a single leaf was left on any tree, and even the onions buried in the ground were damaged. Farmer Ottmer and his wife and brother replanted the whole place, and the happy result is, the Ottmers have the most gorgeous late tomato crop of all. Midsummer tomato plantings have not yet begun to yield, but the Ottmers late spring replanting is going like blazes. The Ottmers also have some real fine looking summer squash for the same reason; as the other farmers squash plants are giving in to the vine borer, the Ottmers plants are still young. (Sunset Valley) 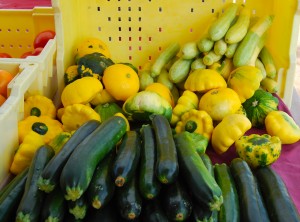 Ottmer's summer squash, including Black Beauty zucchini (Photo by Kate Thornberry)
Jim Richardson has begun taking reservations for Thanksgiving Heirloom turkeys. Just see him at the Barton Creek Richardson’s table and sign yourself up for one. Soon he will begin taking pre-orders for the conventional turkeys as well (they don’t take as many weeks to fatten up as the Heirlooms). Typically, a deposit of $20 is required so that he knows you are serious about it; he has limited room so he doesn’t want to end up with unclaimed turkeys. Richardson Farms will also have pork tenderloins this weekend at all locations (Downtown, Barton Creek, Sunset Valley). 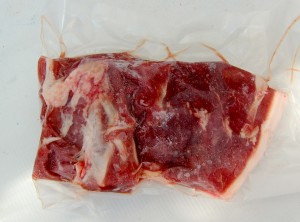 Lamb Sirloin from IO Ranch (Photo by Kate Thornberry)
IO Ranch Lamb has a new batch of lamb sirloins for sale. IO is the only place that I know of on the planet Earth that you can get this unusual cut. The lamb sirloins are perfect little lamb steaks that can be grilled like a beef steak, the right size for one or two people. If you have switched to pastured meats, these babies are very economical compared to the pastured beef and every bit as good (or better). 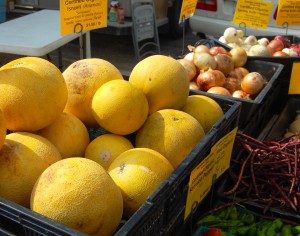 Israeli melons from Hairston Creek Farm (Photo by Kate Thornberry)
Lily Pad Farm is getting back into the lettuce game this weekend. WIth their aquaponic greenhouses, Lily Pad can get the lettuce action happening earlier than everyone else; the abundance of water keeps the lettuces from getting bitter. Lily Pad will still have basil as well.

Farmer Sams at Full Quiver Farms will have Gruyere cheese this Saturday, in addition to his regular varieties – cream cheese, cheddars, mozzarellas and feta. (Also he secretly sometimes has cottage cheese but you didn’t hear that from me.) 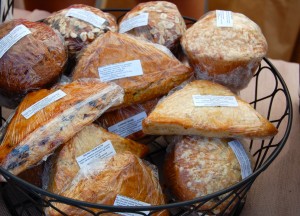 Scones from Texas French Bread at the Sunset Valley Market (Photo by Kate Thornberry)
Braune Farms has very distinctive tablecloths (which you would think I would be able to recognize by now), so there really is no excuse for the fact that I often can’t identify whose lovely produce is in the picture, when it is clearly theirs. This weekend they will have really delicious sunflower sprouts, okra, onions, cucumbers, eggplant, yellow squash, and cherry tomatoes. 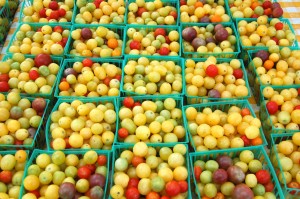 Cherry Tomatoes (Photo by Kate Thornberry)
Dai Due will return to the Mueller Farmers Market this Sunday after a brief hiatus, during which Jesse and his gang were only at the Downtown Market on Saturdays. This weekend Dai Due will be selling oven-baked jujube jam ($8), and Hatch Chile and Lime Sausage ($12). The breakfast and brunch at the market menu reads as follows: