What Does the Future Hold for Flip Happy Crepes?

Popular South Austin trailer will have to move

The real estate slump that saw prime undeveloped lots around the central city turned into food trailer courts over the past decade appears to be over. Now property sales and development plans are playing fruit basket turn over with the local food truck scene. South Austin mainstay Flip Happy Crepes is the latest enterprise likely to face eviction. 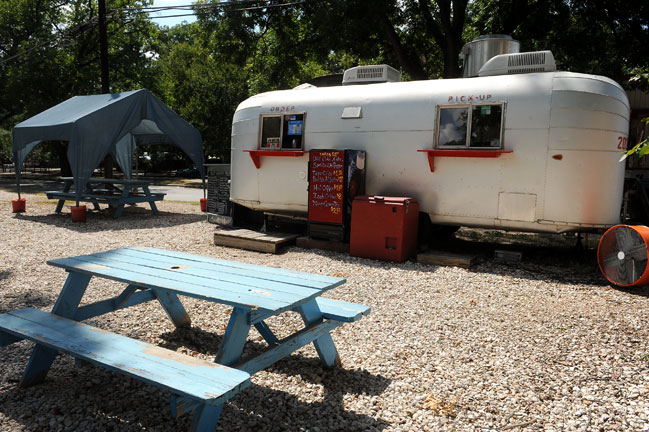 Flip Happy Crepes (Photo by John Anderson)
In 2006, young Moms Nessa Higgins and Andrea Day Boykin met when their kids started kindergarten at Zilker Elementary. They got to know each other and realized they were both looking for a food venture that would allow them to contribute to the household economy while being their own bosses, and working when their kids were in school. "We decided on a trailer because it was an affordable avenue to take and allowed us more time with our families than a full service restaurant would have," Nessa says.

"We chose crepes because no one was doing them here and I was sure they would work in this kind of set-up. Every summer, we take a trip to visit my husband's(chef Patrick Gannon) family in Ireland. I had seen a very popular crepe cart at a weekend street fair in Galway, the guy always had a long line, and I just knew crepes would work here," Andrea recalls.

The friends began their business in a vintage Avion (like an Airstream, but without the shiny finish) trailer they had customized to suit their needs. Andrea naturally gravitated towards food production and Nessa took control of the business angle. The local mobile food scene was still very much in it's infancy at that point and they had a difficult time finding a place to park the trailer. "So many places turned us down until the owner of Floribunda [a landscape nursery at 2041 S. Lamar, long since closed] said, 'Sure, you can park here and I won't charge you any rent,'" Andrea Day Boykin recalls. "We stayed there a year and then moved to this lot in 2007." 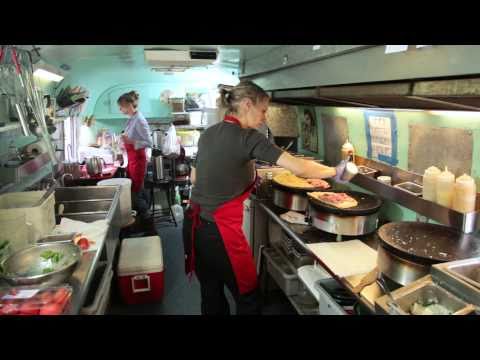 The lot at the corner of Jessie Street and Butler Road has been the home of Flip Happy Crepes ever since. From that shaded corner, the Flip Happy ladies and their delicious crepes attracted the attention of the local print and television media, soon followed by Food & Wine, Bon Appetit, Southern Living, and The New York Times. They were challenged to "throw down" against New York chef Bobby Flay on the Food Network and were the subject of television segments on Texas Country Reporter and two different PBS specials. When we reflect on how Austin's food truck scene became a well-known national phenomenon, it's clear that all the early attention generated by Flip Happy Crepes helped focus the national media on River City. 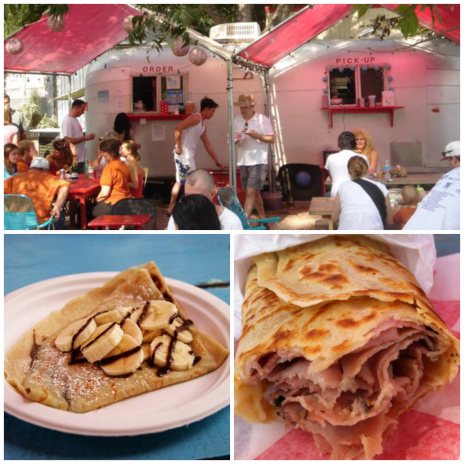 When Nessa and Andrea returned from their annual two-month summer hiatus, their landlord's secretary told them that Carpenter's Union Local 1266 had sold the property at Jessie and Butler. The Flip Happy gals don't know for sure what will become of the property and they haven't received an official eviction notice, but they realize they've got to relocate. Ideally, they would like to relocate and be operating in their new space in time to capitalize on the two weekends of ACL in October, so they are busy checking out all possible spaces. 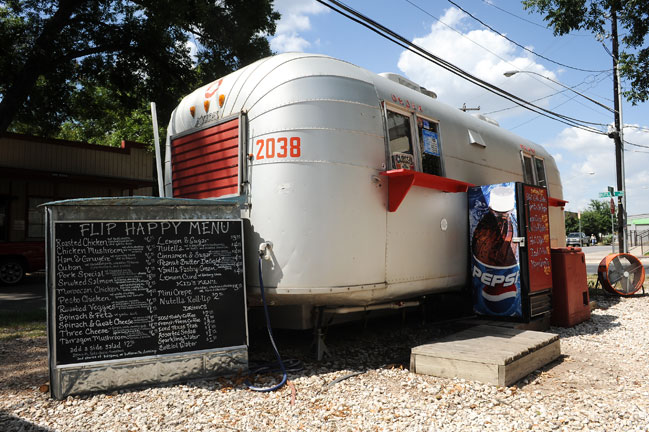 And because the oldest of the kids who brought them together years ago are now teenagers who can drive, they are also considering selling the business once they get relocated. "We've been happy running this business for seven years now. Although we've been able to keep it lucrative and support ourselves with amazing schedules, we are both ready to move on the the next phase of our lives," Nessa Higgins explains. "We've had several opportunities over the years to turn Flip Happy into something bigger and more profitable, but our priority was always to be full-time mothers to our children. We're ready to offer that opportunity to someone else. Flip Happy has become a well-known establishment in Austin. We'd like to see it continue as it is or be taken to the next level be someone else." 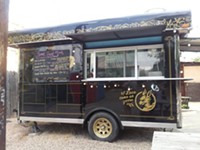