Sunday markets thriving in the shade Taste the Rainbow!
The Sunday morning farmers markets are thriving in spite of the August heat. This is the time of year that the Mueller Market really benefits from the shade of the gigantic airplane hangar it nestles under. The difference in temperature between the broiling sun and the shady interior creates a constant cool breeze at this time of year. Flowers at the Mueller Market
The Mueller Market has a good variety of vendors, too. Last Sunday I saw K & S Seafood for fish, Organicare Farms for pork, BLT Farm for grass fed beef, Pure Luck Dairy for goat cheese, Dos Lunas for aged cheese, Mill-King Dairy for milk, and many produce suppliers. 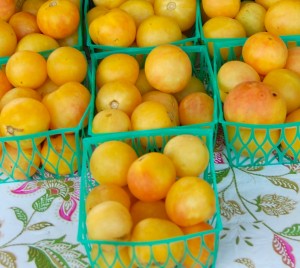 Golden Tomatoes
Like Mueller, The HOPE Market at Saltillo Plaza has the added benefit of shade from the Texas sun for many of their vendors, as well as sunny areas and benches around the plaza. The number of vendors is lower, however; HOPE has olive oil from Salud de Paloma, and artisan bread from FLOUR bakery, but no cheese or milk vendors. HOPE does have a new grass fed beef and lamb table, however: Southern Traditions, and they have had Windy Hill Farm goat meat longer than any other market. (Windy Hill also sells chicken eggs at HOPE.)

Windy Hill Hot Sauces at the HOPE Market
They are also adding a line of preserved foods, mainly hot sauces. The one that really caught my eye is this Golden Fire Hot Sauce made with habañeros, carrots, garlic and honey; the escabeche and XX Hot sauce look pretty darn good too! Winter Squashes by JBG
Johnson’s Backyard Garden had the first winter squash I have seen this summer on Sunday. Really nice specimens of Spaghetti squash and Butternuts. 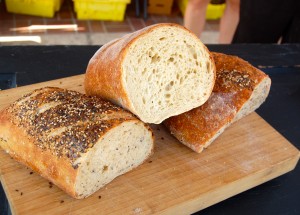 Artisan Sourdough by FLOUR Bakery at HOPE
I was really happy to buy bread from FLOUR at the HOPE Market, because their traditional sourdough loaves really stay fresh for a long time on the counter. Honestly, they stay soft and usable for an entire week, unlike any other artisan breads I have tried. FLOUR is also branching out into pretzel rolls, which are really satisfying, especially for breakfast. 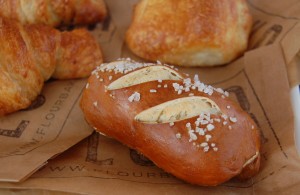 Pretzel Roll by FLOUR
At the Mueller Market, I saw a new vendor, Juicy Jay’s, selling Italian specialties, including individual slices of cheesecake. Their cheesecake is extremely light, with a perfect texture. Juicy Jay’s also sells meatballs and marinara sauce, and their products seem to be very popular. Juicy Jay's Cheesecake
Tomato season is experiencing the late summer lull, as farmers dig up their spent tomato plants and wait for the young plants to begin producing. In the meantime, some of the more esoteric varieties are for sale: Green Zebra tomatoes, Black Krim tomatoes, and these golden speckled tomatoes from Hairston Creek Farm. 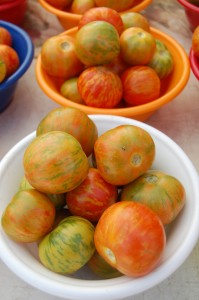 Speckled Tomatoes
Cucumbers are the star of the season right now, and Phoenix Farms at Mueller has more varieties than any other farm. I bought four pounds for eight dollars (they are all $2 a pound) and made my yearly batch of Bread and Butter pickles. If you are thinking about making your own pickles, now is the prefect time. 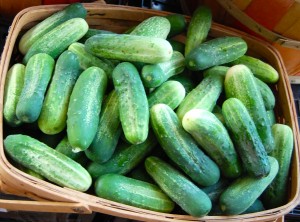