Rachel Feit and Melanie Haupt pop in for a pop-up

By Rachel Feit and Melanie Haupt,

Tuesday night Lenoir hosted the first in a series of pop-up restaurants presented by Olamaie, a Southern style restaurant which will open at 1610 San Antonio later this year. 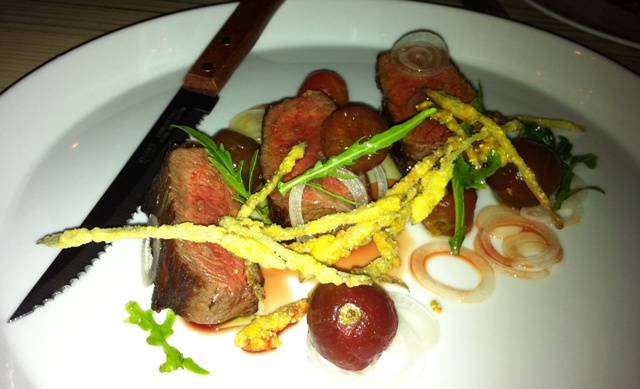 The kitchen is helmed by chefs Michael Fojtasek and Grae Nonas, who between them share some serious professional chops, having worked in both New York and Los Angeles with the likes of Mario Batali, Thomas Keller, Jonathan Benno, and Jon Shook. Fojtasek began his career at Emmett and Lisa Fox’s Fino. We attended their first dinner featuring a sample of the comestibles Austin can look forward to and here are our impressions.

Rachel: The food concept at Olamaie seems really original for Austin. It’s like Southern style cooking of a bygone era: lots of stews, pickle salads, eggs, and puddings on the menu. I licked my plate clean of every last scrap of the blue crab over corn pudding ($20). The dish that was most memorable though was the Smokey Hen of the Woods ($18), essentially smoked mushrooms over braised peanuts and field peas. Honestly, it doesn’t sound that appetizing, but the textures and flavors were haunting. Smokey and woodsy, this vegetarian dish really was a standout. 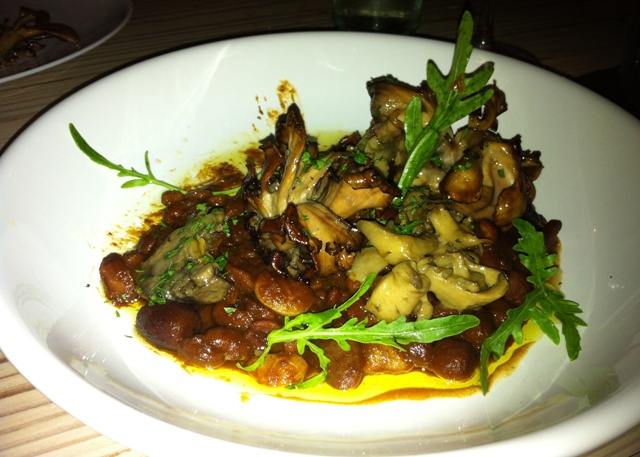 Smokey Hen of the Woods over braised peanuts and field peas (Photo by R. Feit)

Melanie: I don’t think I’ve ever had a vegetarian dish that was so unusual and compelling. I couldn’t stop eating it, even though I was really full. That dish definitely exceeded my expectations, especially since I was skeptical about it from the outset.

I also really liked the biscuits ($6). Those were straight-up Sunday morning Granny biscuits, served piping hot (as they should be). It felt more than a little naughty to start the meal with them, especially slathered in the accompanying honey butter. I was a bit skeeved-out by the little dipper of chicken grease that came with them, though. That felt a little too Honey Boo-Boo to me, and not in a good way. That said, I was about ready to eat the napkin they came wrapped in, given how long we had to wait for our food.

Rachel: No kidding! The kitchen really needs to work on timing a little better. We had a 9pm reservation and were not seated until after that. It took a long time for our waiter to even acknowledge our presence and even longer to get our first course, which was probably not brought out until about 10 pm. Looking around at the other tables it seemed like the pace of their meals was equally slow. This was Olamaie’s first pop-up, and presumably they’ll be using these dinners to work the kinks out of their system.

Melanie: I almost want to attend more of the pop-ups to see what else they have planned for their menu, and watch it evolve along with a cocktail menu and a coherent service ethos. I also wish there had been more of us in our party, so that we could have sampled more of the dishes available.

Rachel: I am excited about seeing what else they will come up with on their menu.

Melanie: Me, too. I can’t think of another place in Austin that does Southern Low Country-style food, and I welcome a change from the same old chicken fried steak and cornbread. I see that the chefs reference Edna Lewis among their inspiration for the menu. Her name has been popping up a lot lately in reference to Southern food. I sense a renaissance/revival on the horizon.

Three more dinners are scheduled at Lenoir this week from Aug. 8-10. Additionally, three more Olamaie pop-ups will take place in Austin over the coming months: 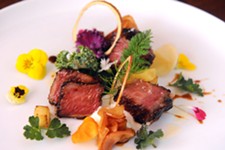 Austin Restaurants for Special Occasions
Want some ambience to go with your food? No problem. 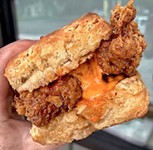