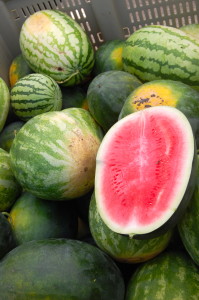 It’s also a great time to grill, if for no other reason than to avoid heating up the kitchen. I bought a sirloin from Wright’s Longhorn Beef this week and if you haven’t tried Longhorn, you are missing out. So tender and flavorful, you can scarcely believe it. Like goats, Longhorn cattle browse as well as eat grass, so the meat is extra high in healthy Omega-3 fatty acids and super flavorful. Serranos, jalapeños, habañeros
All the varieties of hot peppers are coming in and can be bought at any Johnson’s Backyard Garden stand or in assorted baskets such as this one, which I believe is from 2 Happy Children Farm. Figs from Lightsey Farms (Sunset Valley)
A few weeks ago I reported that figs were over; not so! Lightsey’s has a new crop of figs coming in, along with the Texas hard cooking pears. The hard pears are perfect for baking and canning; this week Jesse Griffiths will be serving his French Toast with pear syrup made from the current crop of pears. 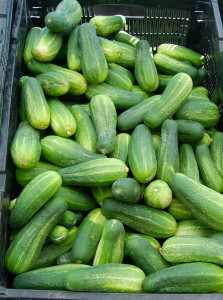 Pickling cucumbers from Johnson's Backyard Garden
Cucumbers are at their peak right now, and many area farmers are still selling the delicate canning varieties. Typically, pickling cucumbers don’t produce well when the temperatures get over a hundred, so I don’t know how they are still producing such sweet, crispy cukes. Get them while you can.

This Saturday Celtic Seafare will be at the Barton Creek Market. Garbo’s Lobster truck will be there, too. 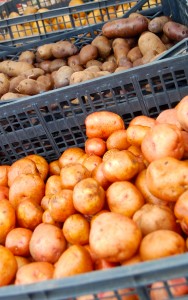 Many varieties of potatoes are also for sale at Austin farmers markets this weekend
At the Downtown Saturday market and the Sunday Mueller Market, Dai Due will be serving: