Out of the Frying Pan and Into the Mail?

The Paula Deen story gets wackier every day

Every time I sit down to write about my personal take on Paula Deen’s swift and colossal fall from grace, some new and even more bizarre angle to the story pops up and I’m dumbfounded all over again. 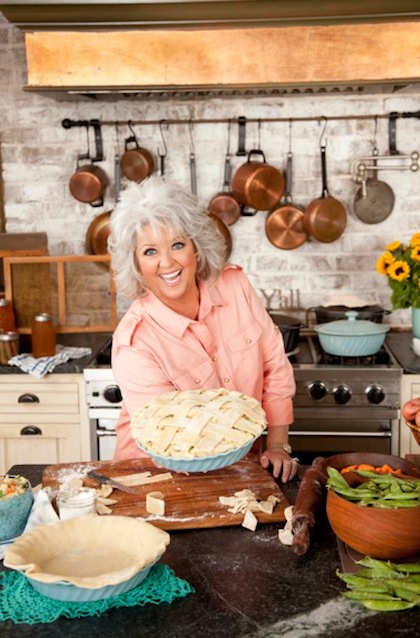 This week has been no exception. Over the weekend there was more speculation that Deen may attempt to resuscitate her career with an appearance on Dancing with the Stars, and Wednesday, CNN had a story about a Deen fan in Indianapolis who has put up a community Facebook page in support of the beleaguered celebrity cook. John Schmitt is encouraging Deen supporters to send clean butter wrappers to all the corporate partners who have dropped Deen in the wake of her disclosures about the use of racially charged language. The slogan for this campaign is “A corporation without Paula Deen is like a butter wrapper without butter.” Schmitt readily admits he doubts the campaign will change any corporate policy decisions, but he wanted Deen and her former corporate partners to know how much support she has around the country. The page has been up two weeks and has amassed over 600,000 friends. The fact that there are so many fans willing to accept Deen’s tearful apologies and presumably continue to watch her programs, eat in her restaurants, and spend money on her books and merchandise makes me wonder if the corporate decisions really had anything to do with commerce at all. 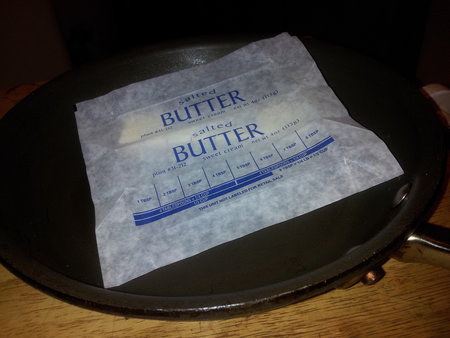 Out of the frying pan and into the mail (Photo by Virginia B. Wood)

The truth of the matter is that Paula Deen’s cooking shows have always made me cringe, sort of like the old Hee Haw series or the new Southern reality show, Here Comes Honey Boo-Boo. Like many other Southern culinary professionals, I’m not comfortable with the broad, stereotypical caricature that both Deen and her style of cooking create about the South. I could respect that fact that she had overcome adversity and built a business empire while raising two boys on her own, but five minutes of one of her Food Network shows made me want to run screaming from the room.

When it came out that Deen hadn’t disclosed her diabetes diagnosis until she had a deal in place to promote a very expensive new diabetes drug for Novo Nordisk, I found the hypocrisy troubling. I wondered at the time if the firestorm over the diabetes issue might cost Deen some corporate sponsors and was surprised that it was mostly other celebrity cooks and a few doctors who took issue with her about it. It did occur to me then that perhaps she wasn’t getting the best public relations and legal advice.

My intuition about spectacularly bad public relations and legal advice was confirmed by the way the employment lawsuit was handled. I mean, seriously, did Paula and Bubba or their lawyers not see The Help? Did they not comprehend what they were likely to end up eating for mistreating employees? I’m sure that in retrospect whatever amount of money would have settled that lawsuit and kept the depositions from ever happening must seem like an amuse bouche when weighed against subsequent losses. I’ve read that “Team Paula” is made up of family members and old friends, people like herself with whom Deen feels comfortable. I understand that she’s a woman of a certain age who was raised in the segregated South (so am I), and while that may put her behavior into better context, it really doesn’t excuse anything.

It seems to me that instead of a fine old Savannah law firm, Deen would have been much better served by someone with an outsider's perspective with the gumption to say, “Paula, has it ever occurred to you and Bubba that examples of your particular sense of humor might not play too well in the national media where you’re already considered something of a joke? Settle this lawsuit – you don’t want it going to court.” There should have been someone who could have kept her from canceling on the Today show at the last minute and releasing the bizarre apology videos instead. Perhaps her new agent and legal team will offer her better guidance.

Considering that I’ve never been a Deen fan and personally find her behavior unappealing, I’m sort of surprised to find myself feeling she’s gotten a very raw and short-sighted deal from corporations for whom she’s made a lot of money. The outpouring of public support would seem to indicate that Deen’s brand is still a commercially viable commodity. My interpretation is that she had become an embarrassment in the media and corporations were willing to distance themselves from her so quickly in part because she is a woman.

Here is why I say that: If every male celebrity chef had to account for every instance of racially or sexually inappropriate language during his entire career in order to get or keep their jobs, there wouldn’t be much food programming on television. Behavior in restaurant kitchens is rarely genteel and, while context doesn’t excuse bad behavior in this instance, either, in my mind it points to a double standard at work. Why should Paula Deen be judged any harsher than male celebrities? I doubt we’ve seen the last of her.