Bitchin’ Kitchen’s Nadia G. on blazing her own path 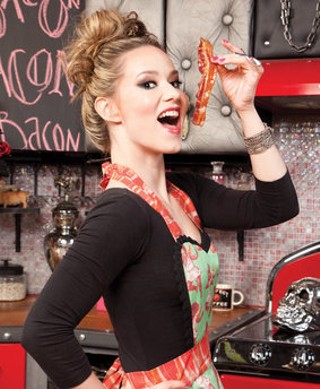 From decapitated doll heads, blatant sexual overtures, and well, the bevy of hunky men, the show is the unlikely place where camp meets cooking.

After wrapping up a week of filming in Austin for her new comedy-travel-food series Bite This (formerly Bite Me), we caught up with Nadia G., or “Nads” to friends, at the East I-35 Ramada. Barefaced and pulling from an American Spirit, we talked food, feminism, and the best guacamole she’s ever had.

Austin Chronicle: Can you tell me a little bit about your new show Bite This?

Nadia G: Bite This is a comedy travel show where me and the boys, Panos the fish guy [and] Hans, hit the road and try to eat our way out of as much trouble as we can get in to. It’s kind of like a cross between Spinal Tap and No Reservations, but with better shoes. That’s what I would say to expect from Bite This. There are so many fantastic places to eat across America and discover, but one thing that’s always been a passion of mine is the story that gets you to the plate. So with Bitchin' Kitchen we choose a theme, whether that is “PMScapades” or “(Dysfunctional) Family Pizza Night,” that topic allows us to have some fun conversation and get a great meal out of it, and the same applies for Bite This.

AC: Why did you choose Austin?

NG: I love Austin! You guys are a bunch of freaky cats. That’s what makes it so cool, both adventurous in and out of the kitchen. The food here is out of this world, the farm-to-table, lots of farm-to-table, lots of sustainable food which I love, and it’s just one of the best places to eat in America. I’ve had the best guacamole I’ve ever tasted at La Condesa ... the pomegranate seeds in the guacamole just took it to a whole other place, because typically with guacamole I’m not the biggest fan: It’s like buttery avocado, alright I get it, very creamy, but once you get those pomegranate seeds on it, it just brightens it right up. You get those little pops of sweet, tart juice. Uchiko is out of this world. Those brussel sprouts! Some of the places we visited on this trip, La Barbecue, that’s the best barbecue I’ve ever tasted. The brisket just melts in your mouth. I think there’s a lot of culinary fusion going on and new school techniques, and Austin is very much on the cutting edge of a lot of stuff, whether it’s food, music, um, beards.

AC: Right, you can’t trust anyone without one. So what’s been the favorite experience so far?

NG: My favorite experience was going to the farm [Countryside Farm]. I had a great time going to Sebastien’s farm. This guy raises all his own animals; it’s all hormone-free. It was quite something to see … it was really an experience to see the animals living so well, and it gives you a whole new respect for the meat you consume afterwards.

AC: How did you get started in the kitchen?

NG: Well, I’ve always loved food. I grew up in a food-obsessed Italian family and everything was about the food. You’re happy? Here’s some lasagna. You’re sad? Here’s some lasagna. You want to talk? Shut up, and eat your lasagna, so I started messing around in the kitchen at about 11-years-old. It never turned out really well, but that’s how it goes, you know, after you put 12 cloves of garlic in a sauce, and you taste that. Then next time you realize maybe I shouldn’t have used 12 cloves of garlic, and you learn. It’s a learning process. I cooked for many, many years, and then at a certain point, I was really into skit comedy – that’s what I was doing. Cooking for me was never a career, it was a necessity, something I loved to do and did all the time, and then one day I said to myself, wouldn’t it be awesome to fuse the two, the comedy with cooking, and we came up with the idea for Bitchin' Kitchen and the rest is herstory.

AC: There are undercurrents of sexuality and feminism – not always mutually exclusive – in your show. Does this represent your personality, or is it for entertainment? Do you consider yourself a feminist?

NG: I definitely consider myself a feminist, absolutely. I think just because you’re looking good doesn’t mean you’re not smart, just because you’re a great cook doesn’t mean you don’t have any personality. All these kinds of boxes and stereotypes of women, we kind of break them down in our show because yes, you can be funny and sexy and crazy and sloppy and you know, tell a great joke. I definitely consider myself a feminist, and I believe strongly in expressing oneself and not falling into stereotypes and kind of blazing your own path, you know and being who you want to be.

AC: Your set has been described as Pee-wee Hermanesque. Did you come up with the design?

NG: When you design stuff, it takes from certain influences, so yeah, Pee-wee Herman, fuckin’ Bikini Kill, you know that kind of trashy-punk-rock-feminist feel, like when you’re taking the Barbie and decapitating it and all the stuff, like, destroying the perfect princess stereotype.