Going in search of a new world in absinthe

Oh, the drinking spectrum. Some of us start our alcohol odyssey in high school with Mad Dog 20/20 or keg beer. By adulthood, we've settled on more sophisticated drinking, like Dewar's scotch or SKYY Vodka and stoic club soda. Martinis are okay, too.

This is also about the time one stops writing with blue ink, as only business-like black will do, and starts framing all of the art before it goes on the walls. By middle age, the fermented potatoes – or corn – and simple mixers begin to bore, or maybe that was corporate life. In any case, remembering what Huey Lewis is famous for, we, too, need a new drug. So, in a celebration of ennui, we decided to seek out the ritual of absinthe. After all, anything that comes with exotic paraphernalia – absinthiana, to be exact – and an expert history lesson, not to mention its fabled hypno-narcotic effects, must be a cross between an episode of PBS' American Experience and a peyote liturgy.

Commonly referred to in historical literature as "The Green Fairy," possibly because of its popularity in the 18th and 19th centuries among Parisian artists and writers, but more likely it is due to wormwood, or Artemisia absinthium, historically used as a tincture, being more intensely hallucinogenic in decades long past than anything found today. In fact, French Symbolist poet Paul-Marie Verlaine wrote so many IOU's during his lifetime due to acute absinthe addiction that his signatures are worth nothing compared with those of his contemporaries. Other fans of absinthe include Ernest Hemingway, Charles Baudelaire, Arthur Rimbaud, Henri de Toulouse-Lautrec, Amedeo Modigliani, Vincent van Gogh, Oscar Wilde, Aleister Crowley, Erik Satie, and Alfred Jarry. 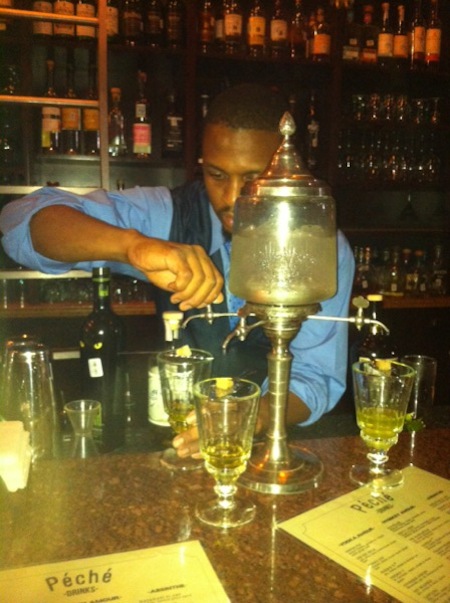 Larry Miller of Peche
We began our instruction at Peche, billed as Austin's "first absinthe bar." Professorial bartender extraordinaire Larry Miller was more than willing and able to produce the works, as he hauled over what looked like a Belle Époque-era hookah pipe outfitted with tiny spigots. Along came pretty glasses, strainers, and sugar cubes. Miller then presented us with three bottles to sample: St. George Verte, a French brandy-based spirit which bills itself as "a layered and evocative expression of beguiling and highly spirituous herbal elixir" with 60% alcohol by volume; Vieux Pontarlier, made with Pontarlier wormwood, Spanish green anise seed, Provençal fennel, and a variety of aromatic herbs and spices, which comes in with a whopping 68% ABV; and Lucid, which features provocative cat eyes on the bottle, and a name that isn't exactly what we are looking for. The careful addition of water by the drop, so as not to "bruise" the spirit, dilutes the alcohol down to a more palatable alcohol volume – hence the aforementioned hookah pipe, called a "fountain," which has four tiny spigots for water droplets. On the rim of the chosen glass comes a brown sugar cube perched atop a flat strainer. It is through this apparatus, and with the addition of sugar and water, that the green fairy takes on its flavor. Unfortunately, the fairy was invisible on this night – we experienced no hallucinations, no weighted poetry emerged from our lips, and my husband still looked just like himself. In fact, this reporter really needed a Coke by the time we wobbled to our table.

On the retail side, we found a surprising variety of brands available, so if a DIY absinthe party is more to your liking, hit up a well-stocked liquor emporium. We hear that water dripped from a spoon containing sugar works pretty well, but lacks the art nouveau beauty of the fountain. One brand, Absente, comes in a gift box complete with a strainer ($41.99); the familiar Pernod, available at every bar ($68.99); the aforementioned Lucid ($62.99), and St. George ($57.99); Mata Hari, a bohemian-style, meaning reduced anise seed, or licorice flavor ($53.99); and finally, the beet-based Tenneyson ($57.49).

Have fun with the ritual. If Edgar Allan Poe's ghost appears, you'll know you're in the right realm.