When it comes to battling the Texas heat, few things are more victorious than an ice-cold Shiner beer. But what happens when Texans move away from Texas? It may be a sin to leave the best state in the nation, but is it such a horrible sin that penance should be the loss of the comfort of a most beloved beer? 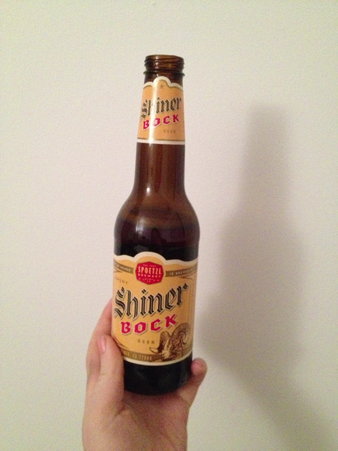 When Emanuell Hernandez moved to New York City for graduate school in August of 2012, he said goodbye to the foods and drinks that signified Texas to him: honey butter chicken biscuits from Whataburger, kolaches from West, Texas, and his favorite Shiner Ruby Redbird.

But a month later, he found himself at Rodeo Bar, a New York City watering hole trying to bring all things Texan up to the Yankee North. For a hefty $8 that could buy him a six-pack back home, Hernadez could enjoy a single bottle of Shiner. “We basically smuggled it in from out of state for a while,” said Rodeo Bar’s Mitch Pollak. “We were the first bar in New York to carry it, and all the Texans in New York were pretty shocked to see we had it.”

But then in April of this year, the incredible happened. Shiner began to distribute in New York, and Texans went wild. At Good Beer, a shop in the East Village, owner David Cichowicz received a shipment of Shiner on April 15, the day after it was officially being distributed in the city. It sold so fast that he immediately had to order more.

At Alphabet Beer Co. in Alphabet City, bar owner Zach Mack had the exact same problem (or fortune, depending on how you look at it.) Before he was able to place another order, Mach sold out of all the Shiner he had ordered. But he was not surprised. “From the first week we opened people were asking us if we sold Shiner Bock.”

So what is it about Shiner that makes Texans so crazy about it?

Charlie Paulette, the chief sales and marketing officer for Gambrinus Company, which owns Shiner as well as Trumer Pils and BridgePort, believes it has to do with the fact that Texans are proud of who they are and where they come from, but more specifically, that Shiner itself is a survivor. “Shiner has been through Prohibition, two World Wars, and all of the competition that came from the bigger breweries that really dominated the beer scene in the 60s and 70s ,” Paulette said. “People get excited because Shiner as a beer is almost a historical figure to a degree.”

For Hernandez, the craving for Shiner is deeply rooted in nostalgia. The Baylor graduate has happy memories of drinking the beer with dinner back home, so when he’s feeling a little homesick, the taste has the ability to take him back to the Lone Star State. “It’s always nice to have something to remind you of back home or that relates to back home,” Hernandez said. “I think the best thing coming out of Shiner being sold here now is it gives us transplants a chance to reminisce about old times and opens up non-Texans to the world of Shiner.”

Will the hype last? Cichowicz has his doubts because he believes once Texans get a fill for their Shiner craving, they will go back to drinking other beers. “People want what they can’t have, and for awhile, you couldn’t get Shiner here," Cichowicz said. “Now that you can, I’m curious to see how it does after it has been on the market for awhile.”

Paulette said that so far, sales of Shiner in New York City have exceeded the brewery’s expectations. The next step is to build a relationship with people who have never tried or heard of Shiner before. Once they have established roots in the New York community and become “proper friends with the people in the city”, Paulette said that they would consider distributing in more cities. So if New Yorkers take a shine to it, chances are other big cities will get a chance to enjoy Shiner, as well.

Now that New Yorkers have access to Shiner and they’ve sampled Texas barbecue from Franklin’s, Louie Mueller’s , the Salt Lick and others at the Big Apple BBQ Party in Central Park last month, chances are they will be asking for more of Texas’ finest goods. Be prepared St. Arnold’s beer and Sweet Leaf Tea, New Yorkers get what they want, and you could certainly be next!

Jessica Lee is a homesick Texan in NYC who stays in touch via this blog from time to time.