How the Caja China Roasting Box Got Its Nicknames

If you've ever spent the weekend in a small town in Louisiana, you probably observed someone using what is referred to as a "Cajun microwave." It's a rectangular wooden or metal box with a tight fitting lid. Smoke and the mouthwatering aroma of roasting pork were probably pouring out. 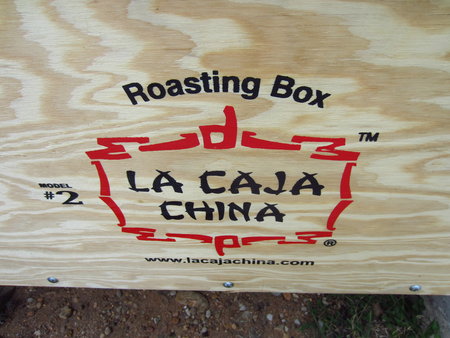 Inside the box is a metal liner, a grate to hold a whole or half pig, and then a metal tray suspended over the pig to contain coals, plus a lid to place on top of the apparatus, sealing in the heat. The “microwave” part of the name refers to the fact that it reduces cooking time for a big chunk of pork by almost half, producing moist, tender meat with crackling smoky skin. The box is La Caja China.

This preparation method is known as the fast and easy way to cook a half or whole pig; much easier and faster than the traditional style of cooking cochon de lait, or Cajun-style roast pig. Cochon de lait is French for “pig in milk”, meaning a suckling pig. But a Cajun pig roast most often cooks a young pig weighing anywhere between 50 and 150 pounds; weaned, but definitely still tender and juicy. For a fantastic and mouthwatering Southern Foodways Alliance documentary film by Joe York on cochon de lait (including some shots of the Caja China method), click here. Suffice it to say that once you’ve Caja China’d, you never go back. 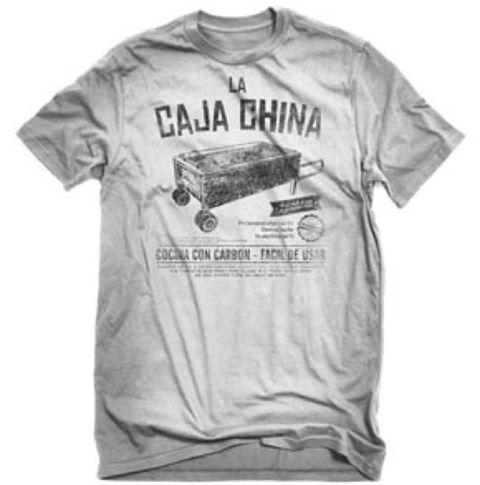 The t-shirt (Photo by Mick Vann)

Stories abound about the name “Caja China”, which means “Chinese box” in Spanish. Supposedly the boxes originally cam from Cuba, referring to a new cooking method imported along with 150,000 Chinese laborers in the 1850’s. The theory sounds logical, but it’s more than likely hogwash. Culinary historians say that the method doesn’t date back that far, and the two cuisines stayed separate on the island. Food anthropologist Sid Mintz points out that the word “china” is a common term used all over the Hispanic Caribbean to describe something exotic, clever, or mysterious. Supposedly in Cuba, and in Latino countries all over the Caribbean, it is common to call anything clever or unusual “Chinese”, so it’s no stretch to see how the clever cooking box became the caja china.

In Peru, the box is called “caja china criolla”, and in Cuba, it’s known as “caja asador” (roasting box) and asador Cubaan (Cuban roaster). No matter what it’s called, it uses charcoal heat in an enclosed space to roast-grill meats in roughly half the time that it would normally take by standard fire-roasting methods. Caja China cooking boxes are all over the web if you want to buy one, just pay attention to the sizes and the building materials.

My buddy Ray Tatum of Three Little Pigs (1209 Rosewood Ave.)has lusted after a Caja China for some time now, wanting to learn how they work and roast a half pig. He’s seen them in operation, and tasted pig cooked in one, and was immediately hooked by the process and the taste. So a couple of weeks back, he broke down and bought himself a Caja China, and then ordered up a half pig from the artisan butchers at Salt & Time(1912 E. Seventh). The side weighed 105-pounds and was gorgeous. Ray brined it for 24 hours in a spiced-up brine, drained it, placed the pig in the new box, and loaded the top tray with oak coals. 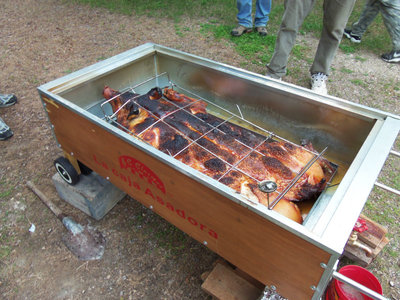 Ray said that he cooked it in about 5 hours, and the skin was deep golden brown, the meat tender and drippingly moist. He was running it as a special that night, and a group of us decided to brave the crowds and drive up from way down South to check it out. What with the ROT (Republic of Texas) Biker Rally motorcycle traffic and the Juneteenth picnics in Rosewood Park, East Austin was indeed rocking! Ray paired the Puerco Caja China with a choice of two sides for $10. (A steal of a deal.) I knew the sides were going to be fantastic, so opted for all four: creamy garlic-cheese grits, fried baby Brussels sprouts, sesame cole slaw, and chipotle potato salad. Each one was a winner. 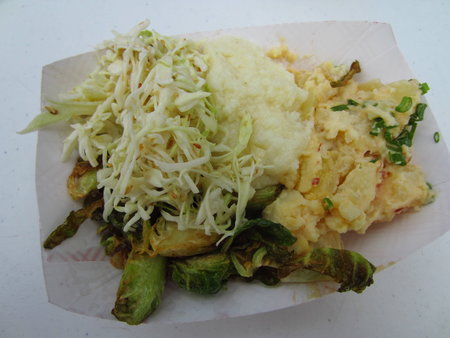 The pork itself was succulent and delicious. I could have eaten a whole boat of the skin: biting through it was like closing your mouth on an unctuous, savory, porkish cloud of roasted pig cotton candy. It had crunch, but also melted in your mouth. The meat underneath was moist and sweet, with sections of the belly being the best. Two lessons learned: Puerco Caja China is well worth a drive from way down South whenever Ray puts it on the menu, regardless of the traffic; and two, for pork lovers, the Caja China is worth the price! 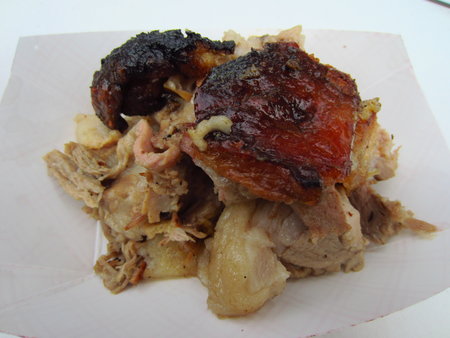 A version of this story is posted at Mick Vann's Gustidude blog. 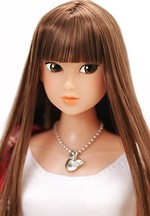