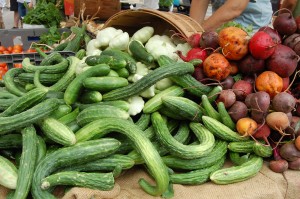 Crisp cucumbers and golden beets from Tecolote Farm
The first melons of the year are beginning to come in. Two Happy Children Farm will be bringing the first cantaloupes of the season to the Barton Creek Market and the Cedar Park Market this Saturday. Johnson’s Backyard Garden has had personal size watermelons for a few weeks, and the full size melons can’t be far behind. 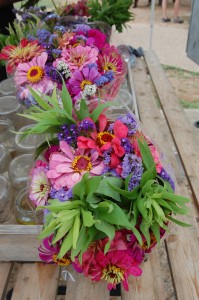 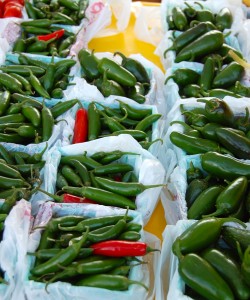 Jalapeños at the Mueller Market

Peppers are starting to show up in better numbers, too. At the Mueller Market last Sunday, Bush Farms from Rockdale Texas had beautiful pints of jalapeño peppers. At the HOPE market, Johnson’s had numerous pints of shishito peppers, and Winfield Farm at Barton Creek has lovely great big sweet peppers.

It looks like Peeler Farms is on long-term hiatus from the HOPE Market; the Peeler farm is south of San Antonio, and the Farmers Market at the Pearl Brewery has won them away from us. I’m happy that San Antonio has finally got a Farmers Market, but I am going to miss Peeler Farms, no doubt about it. 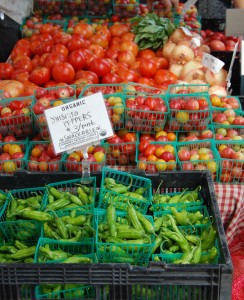 Fruitful Hill Farm will be bringing Green Zebra tomatoes to the market this week (Barton Creek and Sunset Valley) along with heirloom tomatoes and lots and lots of pickling cucumbers.

Did you know Jim Richardson has a brother? TIM Richardson. Tim will be barbecuing Richardson Farms beef brisket and sausage promoting his Rust Never Sleeps BBQ Sauce at the Barton Creek Market this Saturday. Richardson’s meats set the standard (especially their beef!), so this is something you aren’t going to want to miss. 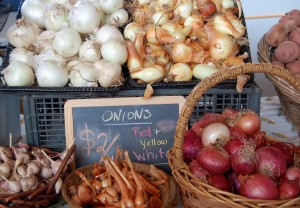 All kinds of Onions-Mueller Market

Green Gate Farms at the Mueller Market has a spectacular assortment of onions. They have white onions, red onions, yellow onions, as well as shallots and garlic. Absolutely wonderful, I filled up my whole onion drawer.

Summer squash is becoming plentiful at all the markets. Yellow Neck, zucchini, yellow zucchini, pattypan, acorn, and spaghetti squash are in evidence, and Comanche Oaks Farm at Barton Creek has a very special “Chestnut” squash that roasts up with a delicious chestnut flavor. 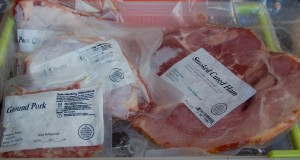 Organicare Farm at Mueller has non-GMO organic whole wheat flour and corn meal for $4 a bag. Organicare is the first farm to offer ground wheat and corn at Mueller, so Mueller shoppers, sit up and notice! You’ve not had cornbread til you’ve had it made with fresh, organic grain. Organicare also has some mighty delicious looking pork products such as big ol’ rounds of ham! I bought one, and I am having it for breakfast tomorrow with scrambled eggs and fresh biscuits topped with Austin Honey Company honey in the comb. More on the Organicare Ham story as it develops! 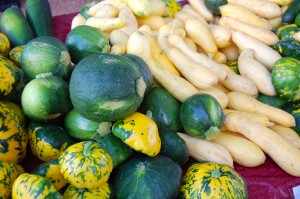 Jesse Griffiths of Dai Due Butcher Shop will begin his yearly Peach Pie contest next Saturday, June 29. Just bring a big slice of your peach pie made with Dai Due Lard in the crust, and the winner will be announced on Tuesday, July 2. Winner receives 6 jars of lard, and a $50 gift basket full of Dai Due sausages, pickles, and condiments. You will also receive the admiration of the community for your PIE CHAMPION STATUS.

Dai Due Butcher Shop (Downtown Saturday; at Mueller on Sunday) will be selling a very interesting product this weekend: Blackfin Tuna in Olive Oil ($10 for an 8-oz. jar). If you have been buying quality tuna lately, you will notice that this isn’t a bad price. But if you want to try it first, Jesse had a Blackfin Tuna salad sandwich on the brunch menu too:

This is the last week for Dai Due’s Chorizo Verde, until late autumn that is!

I will be visiting the Funkytonk Farmers Market on Anderson Lane (at the NATY) this Saturday, and will report back next week!