Traavasa Austin, an experiential spa and resort located on the edge of the Balcones Canyonlands Preserve, is throwing a big bash to celebrate the launch of their new organic farm. They've invited some of the state's best pitmasters and brewers to supply the food and drinks. 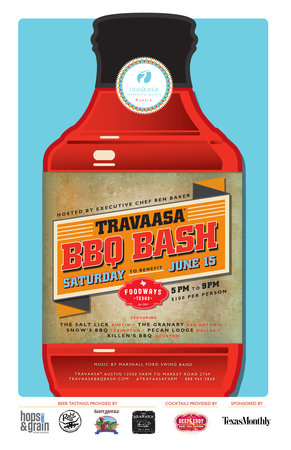 courtesy Giant Noise PR
The party is hosted by Travaasa chef, Benjamin Baker, who will introduce resort guests to the new 3.25 acre farm that provides fresh, organic produce for the kitchen in Jean's Restaurant, Travaasa's in-house dining outlet. Proceeds from the barbecue party will benefit Foodways Texas, a non-profit cultural organization dedicated to the preservation, promotion, and documentation of the diverse culinary cultures of the Lone Star State. We can't think of a better way to support Texas food culture than with barbecue and craft beer.

The party will feature barbecue from the following:

The barbecue line-up is particularly attractive because three out of the five barbecue spreads served at the party are being prepared by companies from the Texas Monthly Top 50 list published in May. That means guests can sample plenty of great barbecue without spending more than $100 and a couple of days on a road trip.

The list of craft brewers who'll be on hand with samples of their wares is every bit as impressive:

Tickets for the party are $100 and can still be purchased online. Weekend accommodations at the resort can be made by phone. Whole Larder Love
A book signing, but with roasted pig and beer