Dinner, it's not just for dates anymore 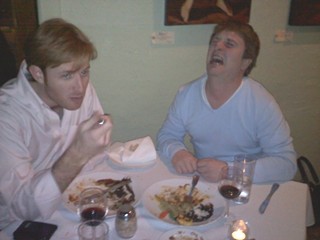 Last month on The Daily Show, writer David Sedaris theorized to show host Jon Stewart that 80 percent of our population's heterosexual men would be against sharing any kind of after-dinner dessert with another of his kind.

Don't count my buddy the Zman and I among them. The two of us would go tag-team on an order of flan so fast it would make your head spin. Two forks; I'm taking sips out his drink when I'm thirsty.

The reason for that insistence is that food, and dessert especially, is best when it's shared with the company you keep. Surely there are movies about this – ones starring Meg Ryan or Sarah Jessica Parker; ones you watched one weekend with your significant other.

That script’s skewed, though: not all bread’s broke with your brunch crowd or best girl. Sometimes you just want to eat mano-a-mano – one table, two dudes – and pop culture has long ignored the bros-dining-out-together demographic.

In its place, the world has grown quite accustomed to the far less favorable bros-eating-chicken-wings scene, one predicated on light beer, loud laughs, and a series of high fives intended to make all those around you fell left out of the fun.

I’m here to tell you that scene ain’t right. Dude dining’s a real thing, and it’s not nearly as bro’d out as you think.

Every few weeks, my aforementioned buddy the Zman and I like to sneak away from our lives and obligations and sit down to dinner. Usually it’s a new place – some spot the Zman found through some food blog or read about in our paper. Zman’s a food guy – he loves talking about lemon swizzles and a restaurant’s straw choices – so our conversation naturally gravitates a bit towards the ingredients each restaurant’s using, or the different cooking devices a chef may employ behind the kitchen’s closed doors.

What we walk about most of the time, however, is life, and the ways in which we’re working towards kicking its ass on the daily. Zman and I grew up together. We moved to Austin when we were 23, but we’ve known each other since we were something like 10.

We talk about work, and women, and how our parents handle getting old. We talk about ideas and vet each other on them, and we talk about the houses on the lake that we want to buy when we’re older and hopefully wealthier.

Then the meal ends and we’re asked by our server if we’d like to try one of the restaurant’s desserts. I’m not a sweet tooth, so I usually defer, but the Zman’s can never resist, so he asks for an item off the menu – making a point to ask for two forks.

This happens regularly, and we both dig in, savoring the sweetness that comes with closing out a meal well spent.