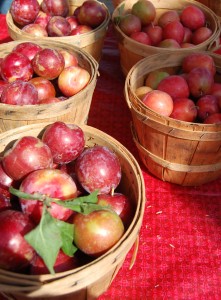 Sweet, tart Texas plums from Lightsey Farms
They say the way to make a living at farming is to be the first with each seasons delicacies, because folks will line up to buy the first peaches (or asparagus, or corn) of the year.

Well, Brenton Johnson of Johnson’s Backyard Garden must be making a living all right, because he’s got the first watermelons and the first okra of 2013. The watermelons are “personal” size, and they are red and ripe and sweet. (All markets) Personal watermelons from Johnson's Backyard Garden
Lightsey Farms (Downtown, Sunset Valley) have the seasons first red plums, and they are wonderful! Delicious eaten out of hand, they also make amazing pie and jam. This is one Texas crop you really don’t want to miss out on. 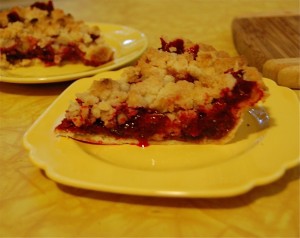 Texas Red Plum Pie
Either this weekend or last is going to see the last o the sweet corn, so if you haven’t gotten any yet, time is running out! I have been buying too much sweet corn every week, and I can tell you from experience that it keeps nicely in the refrigerator. Overbuying is the way to go with this crop, it is just so good.

Blackberries are going strong, and can also be found at the Lightsey Farms table. Several other farmers (including Caeda Farm and STAR Market) have blackberries as well. There is nothing like a peach and blackberry cobbler, and though the Texas peaches aren’t plentiful this year, at least there are some peaches. Late frosts and violent hail took their toll this year on the peach crop; it just makes you appreciate them all the more. 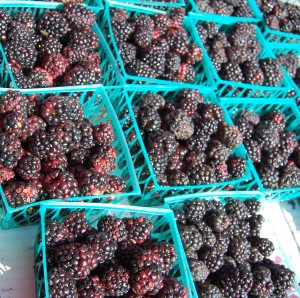 Sweet juicy blackberries (Barton Creek Market)
Speaking of the violent hailstorms: you may remember, last week I was telling you all of the plight of Farmer Ottmer, whose entire crop was wiped out by hail. Last week his son was in a car wreck, on top of the devastating weather. Friends have put up a fundraiser for the Ottmers (much like the farming community did for Jane Levan of Dewberry Hills Farm, when she broke her arm). Here is the link, and I hope we can rally around and get the Ottmers what they need to get back on their feet again!

Dewberry Hills Farm (Really Good Chicken) will be at both the Downtown SFC Market at Republic Square and Sunset Valley this Saturday. 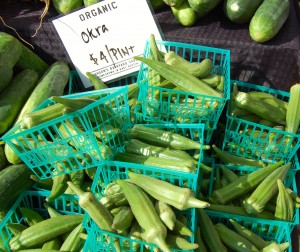 The first okra of 2013 from Johnson's Backyard Garden
Fruitful Hill Farm will also be at Sunset Valley this Satuday, as well as at Barton Creek Market. They will be bringing both pickling and Armenian cucumbers, heirloom tomatoes, sweet corn, sweet Italian and purple bell peppers, eggplant, cherry tomatoes, strawberries, tomatoes, potatoes, sweet onions, and carrots to both markets.

I finally got to try the Connecticut -Style Lobster Roll at Garbo’s Lobster Truck (Barton Creek Market). It comes on a soft roll, and is slathered with tarragon butter and garnished with a slice of lemon. Absolutely the perfect breakfast! For $13 these lobster rolls are a total steal. 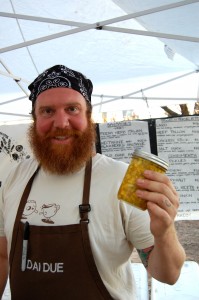 Jesse Griffith pictured with a jar of his wonderful Green Tomato Chow-Chow
At Dai Due Butcher Shop (Downtown SFC, Mueller Sunday Market), goat is the name of the game! Dai Due will be serving up the following hot brunch items this weekend:

From the coolers, Jesse Griffiths and Co. will be selling Chevon (goat) Sausage($12/lb), Goat Tenderloin Roasts ($24/lb), and Anaheim Pimento Cheese ($7), among dozens of other items. It is also the last weekend for their most popular sausage, Chile Verde Chorizo, until late October, when the cilantro and the poblanos synchronize again.