John Mackey, “Conscious Capitalism,” and the Ideology of Food 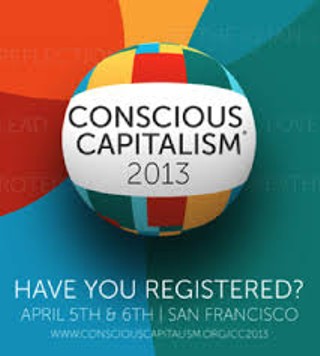 You can’t swing a dead armadillo in Austin without hitting a “foodie” – a variegated species ranging roughly from purist vegans through sushi savants to connoisseurs of deep-fried turkey. They pursue their gastronomic passions with singular concentration, and it’s among the blessings of living here that it takes all kinds to make an Austin ecosystem.

One of the best-known gastronomes in town is of course Whole Foods Market founder and now co-CEO John Mackey, who’s among the most prominent vegans in these parts, a diet to which he in large part attributes his good health, slim figure, and mostly sunny disposition. In his latest book, Conscious Capitalism, he credits a stern talking to from an animal activist for turning him finally away from meat and all its byproducts; and like many of his kind – retail entrepreneurs as well as food enthusiasts – he’s a proselytizer, not content to rest on his own considerable accomplishments as a supermarketer, but determined to bring his spiritual enlightenment to the world.

So it is in Conscious Capitalism (Harvard Business Review Press, 344 pp. $27.00), co-authored with Bentley University Marketing Professor Raj Sisodia and subtitled, “Liberating the Heroic Spirit of Business.” John and Raj seek to define a sub-genre (or future) of capitalism (historically speaking, that form of economic organization under which the means of production are privately owned and managed for private profit) that is distinguished by maintaining a “higher purpose.” The specific purpose varies somewhat, depending on the particular business – Whole Foods and Southwest Airlines, for example, serve their customers in functionally different ways – but Mackey and Sisodia insist that profit is, fundamentally, no more than a means to a larger end, for which they see little or no limits: “Together, business leaders can liberate the extraordinary power of business and capitalism to create a world in which all people live lives full of purpose, love, and creativity – a world of compassion, freedom, and prosperity. This is our vision for Conscious Capitalism.”

There is a whole lot of that dewy-eyed claptrap – er, visionary rhetoric – in the book, in the end as much a religious tract as a business management text. Conscious capitalism is all about “heroism,” and the entrepreneur, in this telling, is every bit the triumphant dragon-slayer of Joseph Campbell’s Hero with a Thousand Faces. Maybe Mackey’s dragon was the 1981 Memorial Day flood, when the store was nearly lost but (thanks to a host of customer-volunteers and other self-sacrificing “stakeholders”) not only survived but flourished. Or maybe it was the day he had to kick his father off the Whole Foods board because the two men couldn’t see eye-to-eye – now there’s a businessman’s Darth Vader allegory.

You won’t hear anything in these pages of "the 99%," or growing economic inequality, or falling real wages for most workers, or massive environmental disasters brought about by corporate negligence or malfeasance, or outsourcing of jobs and profits, or corporate hijacking of democracy via lobbying and campaign funds, or similar intermittent embarrassments to the Head-CEO’s-in-Charge. There’s a bit here and there about that recent unpleasantness called The Recession, brought about at least to some degree by widespread financial manipulation – which Mackey and his collaborator attribute to “crony capitalism,” a disreputable but distant relative of the admirably conscious variety, and to be remedied certainly not by legal retribution, but managerial conversion therapy.

Hero is as hero does. The point is, as the authors declaim it, a worthy (conscious) business is a win-win-win-win-win-win (yes, “Win6”) project in which there are no losers, only winners among all “stakeholders”: owners, investors, customers, team members (never “employees”), society, even competitors. (I think that’s the lot, but it’s frankly easy to lose count in this breathless maelstrom of parables.) Reading the book is much like being trapped in one of those ballroom motivational seminars: an endless recitation of brief anecdotes designed to illustrate an all-embracing, paradigmatic formula for business success – in this case, Mackey/Sisodia’s four-part Pyramid of Conscious Capitalism: higher purpose and core values, stakeholder integration, conscious leadership, conscious culture and management.

There’s plenty more where that pyramid came from, and should you want to know more in that vein, you can sign up for the 7th Annual Conscious Capitalism CEO Summit, coming up in October at the Hyatt Lost Pines Resort southeast of Austin. For a mere $3950, you can “Join world renowned thought leaders, trail-blazing CEOs and other leadership luminaries … to support pioneering CEOs in their journey as conscious leaders.” (Anticipate as well a considerable amount of mutual self-congratulation, or “recognitions.”) Yes, it’s not just a book, it’s a movement, given a face by Mackey but (it appears) mostly facilitated by marketing guru Sisodia. Much of the book, in fact, is about capitalist branding – a lament at the currently widespread “narrative” mis-characterizing and oppressing the heroic entrepreneurs of “free-market capitalism,” who are constantly being criticized by impudent people who don’t comprehend how heroic these businessmen in fact are. The book cites grand statistics purporting to show that since its inception, “free-market capitalism” (yet another weasel phrase) has meant for the world nothing but progress, wealth, and harmony – and yet for some reason, far too many of us just haven’t gotten the inspirational message. (There is also no acknowledgement of the intervening political and democratic revolutions that might have given a nudge or two, over the centuries, to that social and economic progress.) Even worse, traditional defenders of capitalism (the late Milton Friedman and his too-purist Ayn Randianism gets a bit of knocking about the ears) pee in the punch bowl by insisting the highest purpose of a business is indeed making a profit and enriching the stockholders, and anything else is ancillary or indeed counterproductive.

The book’s historical pretensions are matched by its literary ones; like a Carnegie-educated keynote speaker, the authors speckle the text with one-off citations of authors ranging from preacher Rick Warren (whose “purpose-driven” homilies are sanctimoniously lurking in the “higher-purpose” underbrush) to Plato. For Mackey and Sisodia, poor Plato wasn’t quite up to philosophical snuff; to his ideals of “the good, the true, and the beautiful” the authors must add “the heroic” – because, well, an ambitious entrepreneur founding a commercial business has obviously found the heroic “courage to do what is right to change and improve the world.” Holocaust survivor Victor Frankl (author of Man’s Search for Meaning) endures the worst of this cherry-picking, when the authors report that he survived the camps (unlike 95% of his fellow inmates) “because he believed that his own life had a purpose.” If only those other prisoners had the foresight to put together a mission statement and a business plan, things might have turned out differently.

Let nobody deny that some corporations are much better run than others; that a business that consciously attempts to consider the interests of all its stakeholders (however generously defined) is likely to be more successful than one that considers only “the bottom line” – especially a retail business like a high-end supermarket that relies so heavily on customer satisfaction. By most accounts, Mackey and Whole Foods employ many innovative managerial practices, including considerable employee (“team member”) autonomy, compensation policies that prevent managerial pay from getting too disproportionate to that of ordinary workers, and progressive environmental and extensive philanthropic (although the co-CEO disdains the term) policies. Even Mackey and the store’s emphasis on healthy living (although it can often become condescending) supports Whole Foods’ commercial purposes; if the employees practice healthy habits, they indirectly but effectively reinforce customers’ preferences for the store’s “organic” product lines.

Mackey himself and his company have been leaders on many environmental initiatives, especially associated with sustainable agriculture and local food-sourcing; if the prices his customers must pay are higher than average, no one is twisting their arms to patronize Whole Foods (“people trade voluntarily for mutual gain”), and if the food is accompanied by the occasional sidelong lecture on the benefits of a plant-based diet, no harm done.

However, Mackey is also notorious for foot-in-mouth disease, when he pretends to an authority on public policy that leads him quickly onto very thin ice. In 2009, he was denouncing national health care reform (“Obamacare”) as “socialism”; on his book tour earlier this year, he declared it is “fascism” (i.e., “government control of health care”), although after the instantaneous public outcry he apologized for “a poor choice of words … due to the baggage and associations that go along with it” (ya think?). Mackey prefers what he calls a “free market” health care system, although handing over another 30 million customers to the tender mercies of the private insurance companies is apparently not free market enough for him. Whole Foods offers high deductible health insurance and health savings accounts to its full-time employees (about 75% of "the team," Mackey says); that’s certainly cheaper for employers, but how it addresses the millions of people with no access to the insurance market (or regular health care) at all – including even those part-time folks not quite members of "the team” – Mackey has nothing useful to say. Lower business taxes, he suggests, would mean more people donating to health care charities; and of course, eating more organic vegetables would eventually mean we could all live “largely disease-free lives until we are well into our 90s and even past 100 years of age."

At which point, one presumes, we would mercifully break down all at once like the legendary one-horse shay, never having visited a doctor or needed a hospital until one final spirited, juice-cleansed jog over to the undertaker.

While I’m not exactly a regular customer – not quite the sufficiently deep-pocketed demographic – I do patronize and appreciate Whole Foods, the quality of its products, and its enthusiastic team members (who do not, alas, enjoy the many benefits derived of the militant unionism of actual U.S. professional sports “teams,” a notion Mackey finds institutionally old-fashioned and personally distasteful), and I’m glad the company is an integral part of the Austin economic and grocery landscape. Why its founder and co-CEO seems to feel that’s never quite enough, and is always braying about feeling unloved and unappreciated, along with his fellow misunderstood captains of industry, I can’t rightly say.

I guess it just gets lonely at the top of the food chain.

What Would John Galt Do ... About Global Warming? Deny It.
Is John Mackey's 'John Galt' complex putting Whole Foods' bottom line on the line?