Notes from the Qui Media Preview

Anyone who reads our food section closely already knows I’m not our resident Asian food expert. I’m allergic to soy, can’t eat raw fish, and my palate is better suited for other flavor profiles. However, I was not about to turn down a personal invitation to the media preview dinner at Austin’s most eagerly awaited new restaurant. 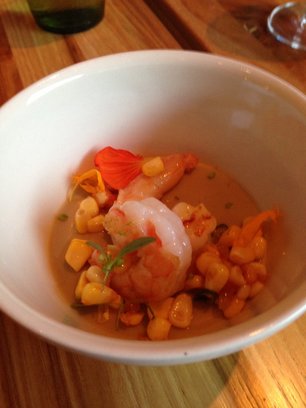 Gulf Shrimp Chawanmushi (Photo by Isaak Johnson)
In my RSVP, I advised them of my dietary issue and enlisted a dining companion who could handle scooter duty, drink cocktails, and appreciate Asian flavors. Off we went to Qui, the eponymous new restaurant from Austin’s own Top Chef, Paul Qui.

Seatings were staggered from 6 to 7pm, and each group was welcomed with cocktails on the enclosed patio, given a guided tour of the space by the future Mrs. Qui, Deana Saukam, and seated at the bar or long communal tables. The bartender whipped up a delightful ginger-ale based mocktail for me and we settled in with some time to really observe the surroundings before food began emerging from the gleaming open kitchen. The main dining room seats 40-50 people at tables, one booth, and along the bar overlooking the busy kitchen. Diners in the main area will order off the menu and no reservations are offered. There is a smaller tasting room sectioned off with panels that is slated to come online later this summer. That space seats 12 diners and reservations to experience the tasting menus served there will be sold several weeks in advance, somewhat like concert tickets.

Qui’s minimalist décor is all wood, stainless steel, and glass, with accents such as light fixtures from Joel Mozersky and mural panels created by musician and graffiti artist Peelander Yellow. The Peelander mural designs also repeat on the menu pages, as well as the restaurant's personalized note cards. Every aspect of the interior has been carefully thought out, from the custom furniture and staff aprons to the petrified wood serving platters, Kreeger Pottery bowls, and broth cups with sporting squirrel tail handles.

It turned out that only minor adjustments had to be made in the meal for me to dine soy-free and that was very good news for return visits. The first course was a mural of local vegetables and edible flowers presented in flat bowls with garlic dashi broth poured around the arrangement. My bright green garlic soup was made without the white soy sauce, providing a smooth, cool contrast to the vegetable crunch. The “salmon butter” offered a piece of salmon poached to a buttery, spreadable consistency, served with many of the same accompaniments you’d expect with lox and bagels: finely chopped boiled egg, red onion, sour cream, briny pearls of salmon roe, and whisper-thin wonton flatbreads for a base. Our appetites were officially whetted.

The next few courses were genuinely stunning, incorporating Texas ingredients and flavors while demonstrating the kitchen’s sometimes whimsical style. Gulf shrimp Chawanmushi was a layered revelation in intense flavors and elegant textures: pools of rich shrimp and lobster broth topped with a delicate savory custard, crowned with plump, sweet Gulf shrimp, and a crunchy Texas corn sofrito. Each layer was perfect on its own, but bites that included all four components were sensational.

Another play on summer vegetables was the “Street Urchin” – half cobs of sweet summer corn dusted with salty uni bottarga and fresh uni; a re-interpretation of Mexican street corn. 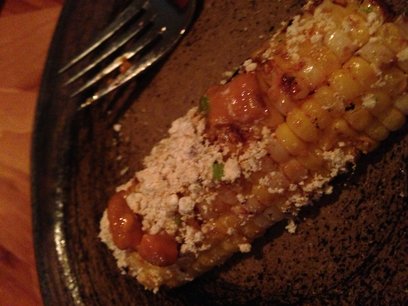 The smartest and most charming display of whimsy came with the Rabbit 7 Ways – samples of everything from rabbit mousse, confit, lardo-wrapped sausage, fermented sausage, and loin were accompanied by bowls of fresh young lettuce leaves and a bright orange dipping sauce made with carrot juice. The course commenced with chefs pouring rabbit broth into our squirrel-handled mugs from portable hot pots. Like the shrimp and lobster broth before it, the rabbit broth was substantial enough to stand alone as a course and hearty enough to satisfy the most serious appetite. 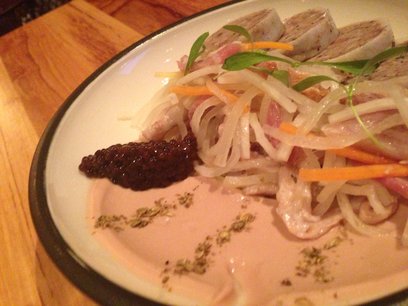 Another menu component that really shone was the roasted peach half served with the steak course that ended the savory portion of the meal. Qui told us the peach halves are repeatedly sprayed with raspberry vinegar and roasted in the oven for short periods of time. This preparation allows the fruit to maintain its texture and integrity while the flavor is greatly intensified.

The final course of the evening was inspired by the cheese ice creams popular in both Mexico and Qui’s native Philippines and was another playful dish. The Cheddar Cheese Ice Cream Sandwich featured rich, sweet/savory rounds of aged cheddar ice cream between crispy waffle layers smeared with goat milk cajeta and a little peanut praline. As unusual as it may sound to mainstream American diners, the combination worked extremely well – no one wanted to share or see any of those babies go uneaten. 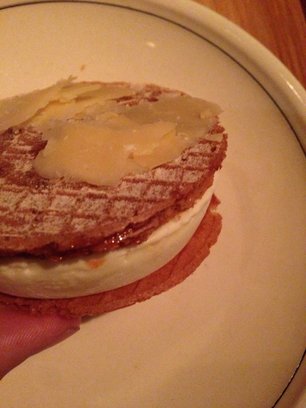 Throughout the meal, both Chef Qui and Deana Saukam worked the room, making their guests welcome and answering questions about the different dishes. This couple makes a very good team; they’re warm, hospitable, and down to earth. They also seem confident enough to surround themselves with talented, creative people and to treat them with respect. General Manager (and certified sommelier) June Rodil shared wine pairings from the short, well-chosen list with every course and custom cocktails such as the "Moment of Clarity" and "Lena Dunham’s Super Nightlife Mule" flowed freely from Michael Simon’s bar. Over the course of a four-hour tasting, the atmosphere became very convivial, with bloggers and print media relaxing and sharing stories. With lively and eclectic background music and a boisterous crowd surrounded by all those hard surfaces, the noise level was predictably high. I’m betting it will be that way most nights that Qui is open.

After hosting a book signing party for friend and fellow Top Chef competitor Edward Lee last night at East Side King at Hole in the Wall, Qui and Saukam jetted off to Italy where he’ll be representing the United States in the San Pellegrino Cup cooking competition regatta in Venice. The grand opening of Qui is scheduled for Thursday, June 20.