The Food Issue:
Book Yourself Some Eats

Literary quotations about food – past, present, and post-apocalyptic

Serving suggestion: Chew on these five brief snacks, as compiled by our bibliophilic Brenner from books that aren't mostly about culinary matters, then order the complete meals of food-for-thought from your favorite booksellers …

The waitress gets away while she can, and Jerome looks down at the little chipped bowl full of yellow water and yellow beans with a few pale seeds floating on top. He sighs, picks up his fork, and looks at my doughnut.

She gave me a sugar cookie with an enormous raisin in the middle to stay my appetite before the grits and hams and eggs, the icy milk from the "larder" abutting the back porch, the coffee – for me, too, for by custom I got coffee here, I discovered, though never at home – and the biscuits and the homemade doughnuts were ready.

Chop several bananas into pieces. Make coffee in urn. Get can of milk from cooler. Puree 'nanas in milk. Lovely. I would coat all the booze-corroded stomachs of England … Bit of marge, still smells all right, melt in skillet. Peel more bananas, slice lengthwise. Marge sizzling, in go long slices. Light oven whoomp blow us all up someday oh, ha, ha, yes. Peeled whole bananas to go on broiler grill soon as it heats. Find marshmallows …

The bread was heavy and brown and sometimes it swelled two or three inches over the top of the pan. When she took it out of the oven she smeared the brown crust with butter and let it cool. But even better than the bread were the rolls. She baked them to come out of the oven just before supper. They were steaming hot and you put butter inside them and it melted and then you put jam on them or apricot preserves with nuts in the syrup. That was all you wanted for supper although you had to eat other things of course. On summer afternoons you took a thick slice of the bread and put cold butter on it. Then you sprinkled sugar over the butter and that was better than cake. Or you got a thick slice of sweet bermuda onion and put it between two slabs of bread and butter and nobody anywhere in the world had anything more delicious to eat.

– Dalton Trumbo, Johnny Got His Gun

He goes back downstairs, into the kitchen. He hopes he'll find some canned food there, soy stew or beans and fake wieners, anything with protein in it – even some vegetables would be nice, ersatz or not, he'll take anything – but whoever smashed the window also cleaned out the cupboard. There's a handful of dry cereal in a plastic snap-top container, so he eats that; it's unadulterated junk-gene cardboard and he has to chew it a lot and drink some water to get it down. He finds three packets of cashew nuts, snac-pacs from the bullet train, and gobbles one of them immediately; it isn't too stale. There's also a tin of SoyOBoy sardines. Otherwise there's only a half-empty bottle of ketchup, dark brown and fermenting. 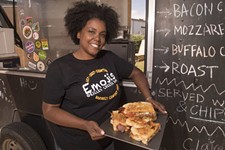