All in the Patrizi Family 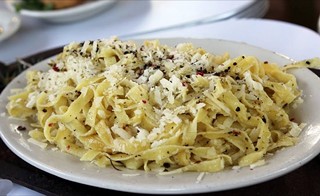 Italian food does not typically cater to trailer truck gastronomy. It’s meant for the big table, the long time. It’s the unofficial food variety of family reunions, of intimate dates. You sit; you drink your wine; you fill up early on bread. And when it’s all over, you sit and drink your wine some more.

It’s with that understand in mind that my buddy and I cruised down Manor Road Tuesday night to check out the latest in Austin’s Kickstarter-funded culinary establishments: Patrizi’s, a spaghetti-slangin’ Italian food truck run by Nicholas Patrizi, the man behind the Jalopy cart on 15th and San Antonio Streets. The place comes inspired by a Beaumont restaurant of the same name, one Nic’s grandfather ran for fifty years. So the recipes at this place have been handed down from big Patrizi, and surely from a few bigger Patrizis before him.

Today’s iteration of Patritzi's rests in the northeast corner of the backyard belonging to Butterfly Bar and its neighboring performance space, the Vortex, on a tidy patch of dirt now canopied under wood framing and a sheet of corrugated steel, that Nic’s cousin Matt built himself. It’s nice. It’s inviting and comfortable, and, for a food trailer, inherently Italian. Each table’s dressed with an olive oil bottle holding greenery and garnishes, and the seats look like they were pulled out of a diner. If that's not the same as the red-and-white checked tablecloth, it’s the next best thing.

Nicholas Patrizi stood present in the food truck window when we stepped up to the counter. With the help of one employee, he answered questions and talked about each dish. My buddy and I ordered the pomodoro with ricotta ($10) off the truncated menu, which Patrizi promised will expand to its full potential once they get themselves out of the first week run, and the Cacio E Pepe ($10): two cheeses (grand padano and pecorino) with black pepper and oil. We also picked up a small caesar salad –homemade dressing, pretty good! – and three pieces of bruschetta ($2 for 1, $5 for 3), which came stacked with either mushrooms or tomatoes.

My buddy was inside at Butterfly Bar when Patrizi arrived with his order. “What’d you get?” he asked quite quickly, unaware of my standing with the Chronicle. “Cacio E Pepe?” I nodded in agreement. “Full order?” Full order. “Full order. Full order… With the Wop burger?” he asked “No. No. No,” he said. “Just the full order.”

Three minutes later, a full order of pasta: a light, portable-if-necessary fistful of freshly made fettuccine tossed lightly with the cheese and the peppers. I thought it was fantastic. My buddy, who’d already considered picking up a Wop burger to-go, thought the Cacio was even better than his order, which I noticed carried a heavier consistency than mine.

About that Wop burger, though, because it raised a red eyebrow at our table. He's a bold man who will name a hamburger after some slang against his kin. I had the right to be curious about its makeup.

“Dude, he takes a meatball and makes a hamburger out of it, with tomato sauce for ketchup, and padano cheese on top,” my buddy explained. Holy canoli. The case against Italian bar food had officially been whacked.

Patrizi came to check on our table as we made our way through the final quarter of our collective meals. He told us about the concerns and the neighborhood (Is Patrizi’s too pricey? Those running the shop know they’ve set set up in a gentrifying area, though TacoMex’s $1.50 tacos still loom around the corner), his plans (more offerings, washable plates held over from his grandfather's restaurant), and the swelling crowd that first night (“Over eighty people showed up. We were expecting only twenty or thirty.”). When he finished, he asked if we'd had the chance to try the Wop burger. “No, sir,” we said, and he retreated into his truck.

Patrizi returned five minutes later with a Wop burger ($6) for our table. It’s delicious. It’s also just a meatball sub named in jest. But for Patrizi, it represented something different. For him, it’s an Italian delicacy that you can hold in one hand.

Austin hasn’t had much to offer in the ways of accessible, dexterous Italian spots that’ll fill your soul without doing the same to your belly. Because of Patrizi’s, that’s no longer an issue. And for that, we have an old restaurant in Beaumont and a family full of fine recipes to thank. 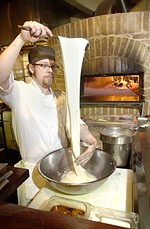