Restaurant Flashbacks From the Frisco Shop

For those of us native to the ATX, there's a certain degree of comfort found in things that don’t change; familiar old landmarks that stay the same are fewer and farther between. But if you go to the Frisco Shop, the food, the look, and the staff will all be the same as they were 30 years ago. It’s like slipping into a favorite pair of old jeans.

The Frisco Shop opened in 1953 as a diner offshoot of the Nighthawk Restaurants of innovative restaurateur and former local mayor Harry Akin. It was located just south of the intersection of Koenig Lane and Burnet Road. It was one of the only restaurants in the area back then, and stayed put until a forced relocation in 2008. Apparently the strip of Burnet Road where the Frisco sat for 55 years was absolutely desperate for yet another Walgreen’s.

Akin was the first restaurateur in Austin to integrate his restaurants and his management staff; minorities and women both held positions of power. He established his own cattle ranch to supply his restaurants with beef, and started a very successful frozen food line, selling his frozen Top Chop’t steaks in Texas supermarkets. He was one of the founders of the Texas Restaurant Association and supported various pieces of legislation that would benefit the restaurant trade, including successfully lobbying for Texas to get liquor-by-the-drink. Plenty of Austin restaurant pros got their start and learned the trade working in the Nighthawk organization.

My connection with Nighthawk started as a child, around 1957. We would occasionally dine there when there was something to celebrate. If we really had a reason to splurge, we went to The Hitchin' Post, which used to be on the east side of Lamar, just south of 12th street, in an elegant one story structure . It was upscale for Austin, and we three sons would get read the riot act before going inside, threatening us with whippings if we did our usual acting-out. My oldest brother Lynn was notorious for pushing my buttons, and many's the time I would end the evening banned to the car while the rest of the family finished eating inside. We were obviously out of our element at the Hitchin' Post, mingling with the landed gentry from Tarrytown and Pemberton Heights.

What I loved most about the Hitchin' Post was that at the end of the meal they brought out a molded ice cream in the shape of a chess knight, a horses head. It reminded me of the logo for Paladin, the famous TV show gunfighter of "Have Gun, Will Travel,' played by Richard Boone. They also had a raging fire going in the fireplace during cold weather; that seemed exotic to me. For "everyday" steaks (and “everyday” was still a rarity for us), we went to the very busy Hill's Cafe way down on South Congress, known as the “Home of the Sizzler." To a kid, the sizzling platters were a thing of fascination and awe.

But sometimes we did visit the original Nighthawk at Riverside and South Congress. I loved the clubby feel of it, and the waitresses were always real nice to us kids. My dad had a penchant for the southern food joints then on Burnet Road and we would occasionally hit up The Frisco. I could sense the similarity to the Nighthawk, even as a kid, and grew to like the comfy vibe of The Frisco. During college days at UT, our group (who all worked at the University Co-op bookstore), would amble on down to the Nighthawk #2 at the corner of Guadalupe and 20th Street for lunch, or for a post partying munchie fest late at night. The legendary C-Boy Parks was a fixture behind the grill and all of the waitresses were regulars who could dish it out as good as they could take it.

But I digress. On a recent afternoon, an old friend and I ambled into the “new” Frisco, as we call it, to find the regulars working there, cooking and waiting tables, and a crowd that looked like they never left the joint.

I had a hankering for the Tex-Mex enchiladas, which is what I used to order down at Nighthawk 2 on the Drag, and my friend ordered the Frisco burger and a side of their onion rings with little hesitation. Girl knew what she wanted. The onion rings are exceptional: handmade, with a cornmeal crust and a doctored-up jalapeño ketchup with a little heat added. We scarfed them down as an appetizer. 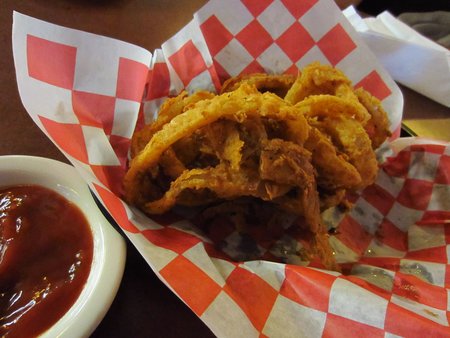 The enchiladas are of the comforting type, heavy with Colby cheese and comino-laced chile meat sauce, stuffed with good quality picadillo ground beef. The beans are rich and meltingly tender, and the Mexican rice has just the right amount of tomato and garlic. This is a high quality platter of TexMex enchiladas. 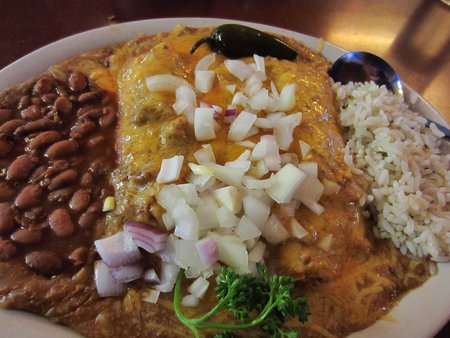 Tex-Mex Enchiladas at the Frisco (Photo by Mick Vann)

The Frisco burger is what the Frisco’s business was built on. A great burger patty and cheddar cheese with special relish and secret sauce, shredded lettuce and tomato, and instead of fries, my companion requested a monkey dish of their slaw, because she's a big fan. It is a typical sweet and sour style, but a little more tart than most, which I like. 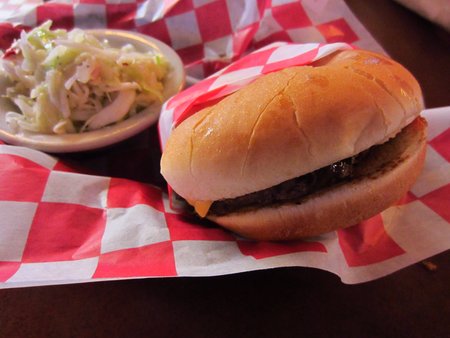 For dessert we went for pie, icebox coconut cream and the chess, or buttermilk. The coconut could have been a little sweeter and richer, and the topping was whipped cream and not meringue. Not a big fan, but the crust was nice an flaky. I am typically gonzo for a buttermilk pie, but this one missed the mark; the crust was leaden and soggy, and the filling one dimensional. It was tired, and definitely not excited about me eating it. The feeling was mutual. All in all, mediocre pie aside, I love me some Frisco Shop. I can go there and disappear into a world 40 or 50 years back with very little effort. 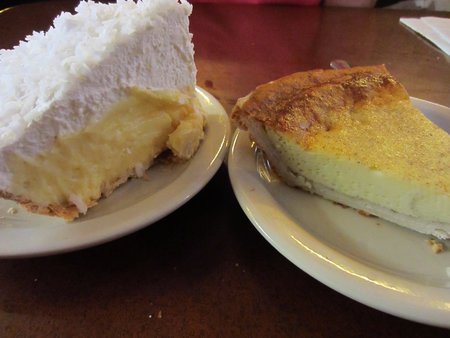