Bug Up and Educate Yourself on Entomophagy

Saving the planet, one bug at a time

They don't taste like chicken, but insects do have their own unique – and delicious – flavor profiles. Oh, and they are considered by many to be the most sustainable protein source on the planet.

I accepted an invitation to join Robert Nathan Allen, founder of Little Herds, at Hickory Street on Monday, May 20 for the 2nd Annual Entomophagy Dinner. I was extremely nervous, and I was grateful for a beer. (Liquid courage, I suppose.) Allen, celebrating his birthday with a good-sized dinner party of friends accustomed to his unique penchant for crunching bugs, spoke with me about the benefits of entomophagy. He mentioned that currently the scientific community has identified more than 2,000 different species of edible bugs suitable for human consumption; as many as 200 species are regularly farmed for Thai diets alone. There is food crawling all around us.

Admittedly, when I received the information before I agreed to attend the event, I was skeptical. Yet a few internet searches later, I had fallen down the strangest and most wonderfully informative rabbit hole. Entomophagy, as it turns out, is practiced all across the globe, leaving Western naysayers in the minority. If two billion people worldwide willingly eat insects, it seems reasonable that we Americans can try to understand why.

A Dallas documentarian named Dave filmed the event and intends to use the footage for an upcoming film about Little Herds and their fellow bug-eaters. Naturally shy, and apprehensive of every bite of the evening, I am sure the footage of me experiencing my first entomophagy dinner is particularly hilarious. Regardless, the first course forever changed my opinion of this slice of food culture. 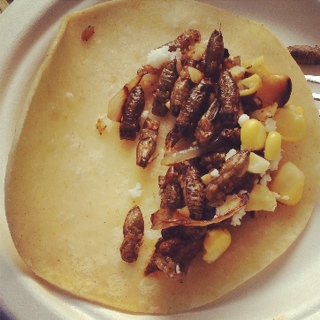 Chef Camden Stuerzenberger of Hickory Street (formerly of Bess Bistro, Walton’s Fancy and Staple, and South Congress Café) created the menu. First up was a warm, spicy fritter topped with a salad in vinaigrette and grilled meal worms. It was... totally palatable! I will not say I enjoyed that specific dish, per se, because my nerves were still overpowering at that point. However, I did not vomit. So far, so good.

The second course was even buggier: cricket tacos. Roasted corn, caramelized onions, queso fresco, and a zesty mole sauce on warm corn tortillas accompanied the backyard buddies, sans legs. Despite the tacos looking like a prank, I was thrilled to find that the crunchiness made it the most interesting taco I have ever eaten. Cooked crickets, incidentally, do not have much individual flavor. Perhaps, then, we could call them the tofu of the edible insect world. They expertly absorb the flavor of the dish, their relevance instead pertaining to nutrition and texture.

Eating bugs for their special taste is for many, myself included, an acquired taste. So, the question remains, “Why eat bugs if you're not starving or feeling particularly bold?”

The CNN Eatocracy blog recently published an article examining The United Nations recent Food and Agriculture Organization report highlighting Edible insects: Future prospects for food and feed security. In short, the phenomenally compelling reasons to eat insects range from a higher protein content than meat to smaller water and physical space requirements than any other source of protein. Or, to "promote health, wealth and a cleaner environment for both rural and urban communities around the globe." Further, the UN pleaded with the globe to consider these healthy, sustainable, tasty food sources for the sake of the entire world population. Eat bugs, contribute positively to the world. That seems like a fair reason to try something new, doesn't it?

Still not sold on entomophagy? What if I reminded you that the FDA already allows a designated number of bugs in your prepackaged commercial food? That's right: Big Food is pretty buggy. The difference is the intention and cleanliness. Personally, I would far rather knowingly eat something than have it sneak into my meal like an intruder in the night. After all, many of us already actively seek thoughtful, local farmers to provide our chefs with clean, humanely raised, organic protein sources. Austin is at the brink of boasting several organizations that will farm human-grade edible insects. 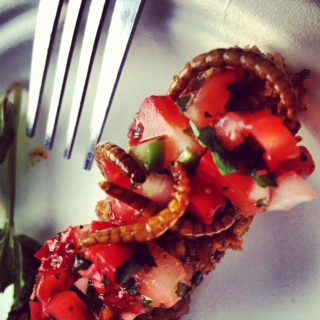 The third course was my favorite, and I went back for thirds and fourths: coconut and meal worm battered calamari with grilled meal worms topped with mint strawberry salsa. In fact, I noticed that the meal worms had their own nutty flavor and were perfectly textured. My lingering horror of a surprise goo eruption never occurred.

So why when I posted my pictures to social media did the overwhelming response from friends become a cacophony of “hell no” and horrible staged stomach noises? Culture, of course.

See this food for thought from the Chron’s own Mick Vann way back in 1999. Or check out this brilliant article from Sierra Club Magazine’s Peter Frick-Wright; a recipe from the article is posted below and two more hit the Sierra website tomorrow, May 30. Eatocracy also posted an article highlighting yet another food writer’s initiation, complete with a list of some of the United States eateries serving thoughtfully prepared insects.

By the time dessert rolled around, I had laughed hard with fascinating people and learned about the secret world of entomophagy. And as luck would have it, they served us two more treats. I could have eaten handfuls of the weightless and beautiful macarons piped with blueberry creamed compote... and ground insects. The last dish was a classic with a twist: two chocolate chip cookies and vanilla ice cream, with bonus bugs. Honestly, the extra ingredients were invisible and I cannot remember whether they were meal worms or crickets. Regardless, they were delicious. 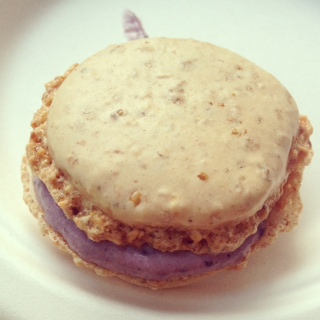 It has been a little over a week, and I still have not had the urge to stroll through my backyard looking for lunch crawling on the ground. I have, however, read every article I can get my hands on about this not-so-strange world. If you are so inclined, and I hope you are, the 6th Annual Bug Eating Festival will be held in Austin Saturday, June 29 at Zilker Park, 7pm. Host and creator Marjory Wildcraft and co-host Allen Davidson will be grilling up grasshoppers, scorpions, and more. There will also be a potluck of regular food, and the event is BYOB&B event (bring your own bugs and bottle). Bottoms up!

The TED Talk that inspired many of the aforementioned entomophagy aficionados is here.

1. Mix all ingredients for the marinade in a nonreactive baking dish. Add the katydids, cover, and marinate in the refrigerator overnight.

2. When ready to cook, remove the katydids from the marinade and pat dry. Assemble the kabobs by alternately skewering the insects, bell pepper, and onion wedges to create a visually interesting lineup.

3. Brush the grill lightly with olive oil. Cook the kabobs 2 or 3 inches above the fire, turning them every 2 or 3 minutes and basting them with additional olive oil as required. The exact cooking time will vary, depending on your grill and the type of insects used. However, the kabobs should cook for no longer than 8 or 9 minutes.