Citywide 86'd: The Fourth and Final Qualifying Round

A loudspeaker crackles, and the ominous monotone of the Uchiko chef's voices comes out of it: "Now hear this, you have five and a half minutes…. you better hurry up…" The crowd chuckles, and the contestants move faster through the kitchen as the fourth round of Uchiko's Citywide 86'd progresses. 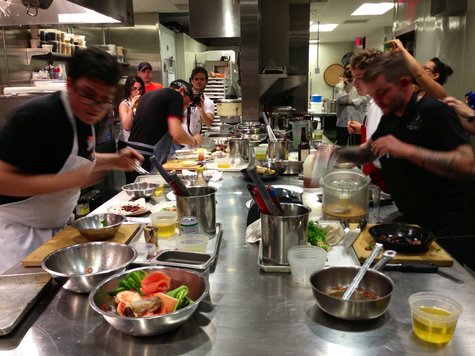 First round competitors (Photo by Carly Yansak)
This friendly cooking competition is Uchiko's take on the popular Food Network show Chopped, where contestants are given an allotted amount of time to conjure appetizers, entrées, and desserts out of mystery ingredients they only see when the clock begins. Each round of dishes is evaluated by a panel of judges, and one cook is 86’d in each round until only one is left standing.

On the other side of the wooden table were contestants: Austin Finley of parkside; Chase Gintner of Sway; Casey Keese of Swift's Attic; and Matt "Gary" Lester of Foreign & Domestic. Each competitor’s work was very impressive, and eliminations were made based on small technicalities. Casey Keese was taken out during the entrée round simply because he needed "just a little more seasoning."

The beginning two courses boasted very difficult proteins. The first ingredient bag held Fresno peppers, salami, coconut juice, and bone marrow. Bone marrow is a dish that can take hours to prepare successfully. These contestants had 25 minutes. "I thought that was pretty cold when they were putting it [the bags] together last night," commented Sharon Bright, waitress of Uchiko and co-executor of the competition. I caught up with Casey Kleese to discuss that before the next round started. "What was your first thought when you opened the bag and saw bone marrow?" I queried. The laugh during his response indicated he didn’t think it was very funny. "Get to the oven as quick as possible." His strategy seemed to work, since his dish was the winning appetizer.

The next obstacle came when each cook discovered another challenging ingredient in the entrée round: quail. None of them hesitated, though. Immediately, knives hit cutting board, components were in bowls, then pans in the oven. I observed Chase Gintner do something that is key to composing a cohesive dish: take a bite to find the taste profile of the quail. But time is so short, he throws the bone down and moves on. Despite the quail-conundrum, the cooks pull off entrées extremely well. "I can't believe all three of them didn't kill the quail," Sterling Ridding said in disbelief.

Gary Lester took the win in the entrée round. His creation was pan-seared quail marinated in blood orange vinaigrette, bean curd crème fraîche, shallots, and fingerling potatoes stewed in a blood orange gastrique. Topped with raw shallots, fried basil, and sorrel, it blew the judges away. Frying herbs, according to Lester, will "give you that same flavor, just with a delicate crunch that flakes apart in your mouth." 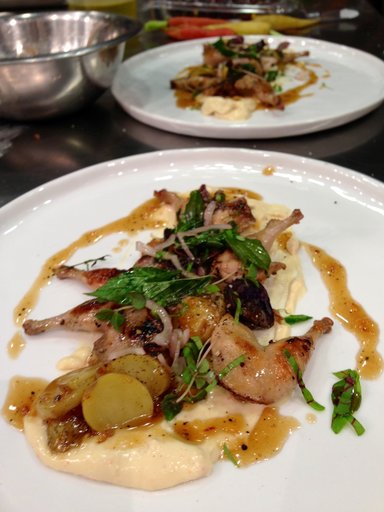 During every 86’d event I’ve witnessed, the dessert round has to be the most hectic and down to the wire, and this time was no different. Lester and Gintner were the two cooks left standing, going as fast as possible to meld white chocolate, oven-baked black olives, Jester King's Pecan Saison brew, mandarins, and cashews into a cohesive dessert. 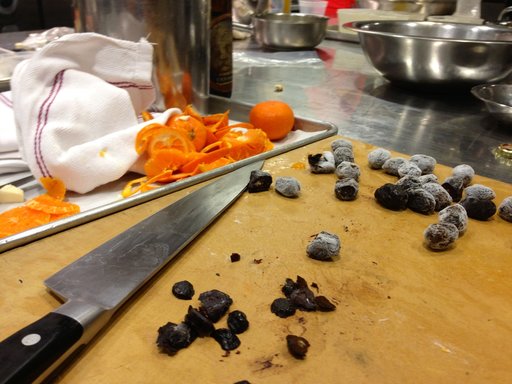 Black olives and mandarins for dessert? (Photo by Carly Yansak)

"I hope you understand that 11 minutes is about to turn into 10 minutes and 45 seconds,” the ominous loudspeaker voice reminds them. Eleven dwindles down to three, and Gintner is running through the kitchen in earnest. "Where the fuck is it?!" he exclaims, scanning the counter before grabbing a blender. He finishes with a flourish, dropping a pan steaming with liquid nitrogen that he exclaimed was, "Jesus! … Hot and cold at the same time!" It was the second time Chase Gintner burned himself that day, but the burns ended up being well worth it when he walked away with the title. 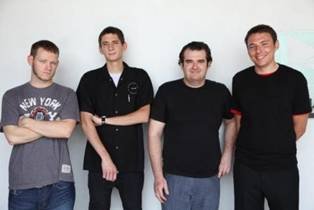 The 86’d finale will take place Monday, June 17th with newly minted 86’d champ Chase Gintner of Sway joining his co-worker Joaquin Ceballos, John Hajash of Congress, and Brandon Martin of Foreign & Domestic to compete for an all-expenses-paid stage in a famous restaurant. And, yes, you read it right. Two of the competitors will be coming from the same restaurant, which could lead to some serious in-house bragging rights. It will also make for a very interesting competition rivalry, which we as the public are all invited to watch. Hope to see you there.