Summer fruit and flowers come to the markets 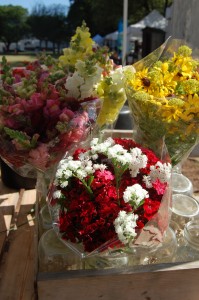 Beautiful flowers at the Downtown Market
Blackberries and peaches are starting to come in! The quantities will be small, however. Caskey Orchards will be bringing a few early peaches to the Barton Creek Market this Saturday, and Caeda Farms will be bringing this year’s first blackberries. Lightsey Farms should have some peaches for sale at the Downtown SFC Market in Republic Square.

Caeda Farm has some gorgeous summer bouquets for sale, as does the Really Fresh Flowers stand at the Downtown Market. Lots of stunning lupins and even a few sunflowers and gladiolas.

The peach harvest was going to be small this year due to the late frosts; the vicious hailstorm last week certainly didn’t help either. But not only peaches were devastated -- Ottmer’s Family Farms were completely stripped by the hail. “Everything above ground was stripped away,” said Farmer Ottmer, “There aren’t even any leaves left on the trees.”

Mid-May is late to replant in Texas, but the Ottmers are going to see if they can find some tomato starts; meanwhile, be sure to stop by the Ottmer tables and buy all the things they were able to salvage. They still have root vegetables such as radishes and carrots, and a few onions (most of the onions were damaged, though, as they stick out of the ground a little), and they always have the very best chicken eggs around (I always buy my chicken eggs from Ottmers!) We’ve got to stick together and show the love -- let’s clear the Ottmer Family Farm tables out this Saturday! 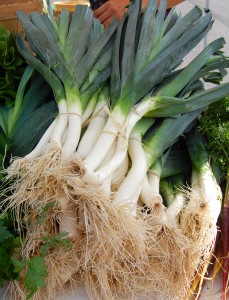 Leeks from Tecolote Farm
Dewberry Hills Farm will only be at the Sunset Valley Market this Saturday, due to labor shortages (in other words, Terry is still working on that new brooding house). But as they haven’t had much time to process birds, some of them are getting to be pretty fair size--between four and five pounds! Jane will be selling these monsters for only $3.50 a pound. She is willing to split them in half for you and vacuum seal both halves, so you can cook half now and freeze half for later. Just drop them a line to reserve one of these sweet deals (or get there early...very early.)

This week Boggy Creek Farmstand has strawberries, green and yellow beans, beets, parsnips, kale, leeks, salads, and new potatoes. Famous cookbook author Deborah Madison is going to be at Boggy Creek Farm this Saturday from 8am to 1pm, signing her new cookbook Vegetable Literacy. (Ten Speed Press, $40) The book is a study of 12 vegetable families, which Deborah will bring into the kitchen via 300 delicious, simple recipes. The book is $40 plus tax, available at the farm. 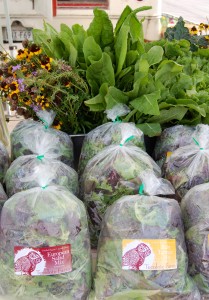 Lettuce from Tecolote Farm
Exciting Barton Creek News: Hold onto your hats, but a lobster stand is going to open! Garbo’s Fresh Lobster is going to be flying Lobster in from Maine. Lobster is definitely in the “expensive treat” category, but it will still be fresher and cheaper at the Farmers Market than it would be anywhere else, and, they are going to be selling Lobster Rolls!! (I have been admonished for using too many exclamation points, but really, that sentence deserves two.) Garbo’s Lobster Rolls will be made on local rolls with freshly made olive oil mayonnaise.

Celtic Seafare will be at Barton Creek Market this weekend as well. This week their hot smoked salmon will be made from wild Sockeye “Red Salmon” from Bristol Bay, Alaska. Their cold smoked salmon will be Black Pearl sustainable harvest salmon from the Shetland Islands. This week Celtic Seafare will be adding a Smoked Salmon Salad to their menu of salmon sandwiches, bagels with lox, and other fresh sandwiches.

Getting back to actual local farm items: Winfield Farm will have amaranth greens this weekend again. These greens make an interesting salad addition, but more importantly, they are the type of green traditionally used in India to make the dish Sag Paneer (usually made with spinach here in the United States.) Winfield Farm will also be bringing snow peas, spring greens, kale, rainbow chard, lettuce and some interesting varieties of radishes: French breakfast and Italian candlesticks. 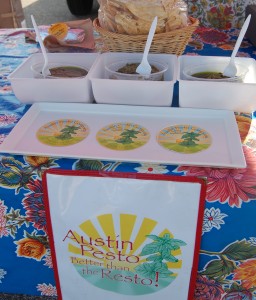 Over at Sunset Valley, Concha of Concha’s Salsas will again have fresh Gulf Seafood such as shrimp, flounder, and snapper. I tried Concha’s shrimp last week and they were fresh, firm and sweet. 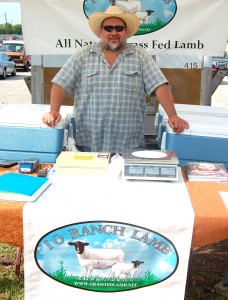 Jeff Ruyle of IO Ranch Lamb
Jeff at IO Ranch Lamb has been bringing lamb stock bones to the market along with his tender lamb chops, shanks, roasts, ribs, sirloins and sausages. These stock bones are very inexpensive and make a rich, meaty stock, perfect for onion soup or lamb braises. If you make a decent sized purchase, Jeff told me he’ll throw a bag on stock bones in for free! (If you don’t plan to make soup, they will be deeply appreciated by your canine pals.)

Baguette et Chocolate has added a lovely new 6 Seed Bread to their line up. It has great depth of flavor and makes outstanding toast. The loaves are not quite big enough for sandwiches, but the slices are the prefect size for breakfast. 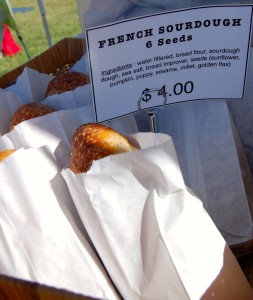 Baguette et Chocolate's marvelous Seed Bread
Speaking of breakfast, Dai Due Butcher Shop will be cooking up the following at SFC Downtown Saturday and at Mueller Sunday: