Members of the local vegan and vegetarian communities (as well as one of the contributors to the Austin Chronicle food section) are dismayed at the news that this convenient vegetarian mecca is closing up shop. Where are they going to find the healthy wraps, stellar falafels, or addictive vegan baked goods they've come to love? 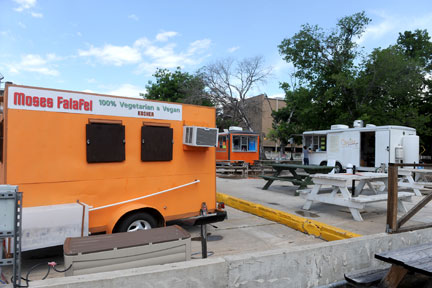 Capital City Bakery owner Kristen Davenport says her landlord notified tenants earlier this week their last day on the lot would be May 13. "I was told when I came on the lot that a development was planned, but I was expecting a month's notice at least," Davenport said. As it turns out, the property owner, an aptly named outfit called Rolling Cash Ventures, has finally gotten a city permit to demolish the old apartment building just north of the food court and need to move quickly. "They've offered me a space in the lot they own at E. Sixth and Waller, but I'm concerned they may decide to build something over there before we finish restoring the house on Cesar Chavez where I can have my own bakeshop," she says. Based on customer reports, Davenport's loyal clientele will follow her anywhere.

Other Longhorn food court tenants we spoke with had their relocation plans in the works. Rishi Dhir of Conscious Cravings is moving this particular truck to the Qwik Ice parking lot at 5715 Burnet Road while his original truck remains in the South Austin Trailer Park & Eatery (1311 S. First). Moses Falafel owner Samuel Haviv was planning to head home to Tel Aviv for a few months to recruit investors and family members to join him in a brick-and-mortar operation here, so his hiatus and journey will just start a little sooner.

After checking things out at the Longhorn Food Court, I dropped by the East Side Fillin' Station (E. Sixth & Waller) for an update on the trailer scene there. Way South Philly owner Willie Pierce says his landlord assures him there are no immediate development plans for the lots that are home to a dozen food trailers as well as Cheer Up, Charlies and to expect some new trailers there soon. As long as I can still find the remarkable migas tacos from the Veracruz trailer and the occasional CoolHaus ice cream sandwich, I'll be happy. While I was there I did happen to notice that the folks from Curra's have set up a trailer and some picnic tables on the lot facing Waller. The set up is just behind the long-shuttered Uptown Sports Bar, also known as the undeveloped jewel of that particular stretch of hipster heaven, and looks like a Mexican food beer garden. 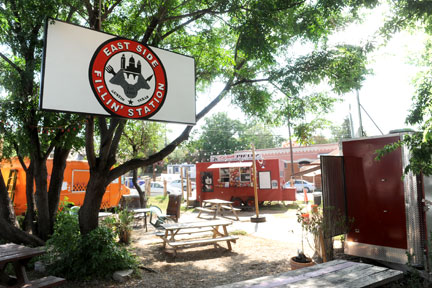 East Side Fillin' Station trailer food court (Photo by John Anderson)
It should really come as no surprise that food trailers are on the hunt for new parking spots now that the economy is picking up and real estate development money is flowing once again. If the current rumor on the street is to be believed, the big food trailer court in the 1600 block of South Congress will be vacant by the end of the month, with anchor tenants like Hey Cupcake and Mighty Cone already gone, making way for the construction of a boutique hotel. The Longhorn Food Court lot at MLK and Rio Grande will become part of a highrise condo development and who knows what will ultimately be built at the corner of E. Sixth and Waller? Prosperity equals change in the food truck game.

East Side Bars Sporting New Food Trucks Oct. 11th
Be More Pacific at the Volstead & new East Side King back at the Grackle