Eatery is moving from one busy restaurant row to another

courtesy El Chile Restaurant Group
Look for El Chile to re-open in the space that housed the popular La Reyna (1816 S. First) for about 30 years before the Hernandez family sold to the Macias brothers of El Meson. Once they bought and refurbished the old building, the Macias brothers made a couple of attempts to re-open the popular neighborhood dining spot, but finally opted to lease to Rivero's group. What with the closure of Jovita's and La Reyna and the addition of four trailer parks, La Barbecue, and upscale restaurants Elizabeth St. Cafe and Sway Thai, that particular stretch of South First is no longer mostly Mexican eateries and now serves up a microcosm of Austin's new culinary diversity.

"With so many new and exciting restaurants opening on South First, we think that a familiar face will be a welcome change of pace for South First Street diners," Rivero explained. Designer Joel Mozersky is fast at work transforming the space into El Chile Cafe & Cantina with the projected opening at the end of May. Executive chef Jeff Martinez is in charge of the kitchen and plans to add some new dishes to the El Chile menu once he's at work in a bigger kitchen. 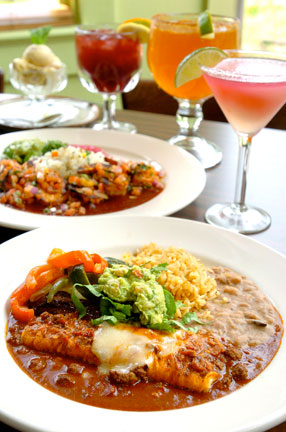 Rivero still has a long-term lease on the restaurant space at 1809 Manor Road and he is considering several concepts for it. "We've considered bringing back the Red House Pizzeria because of requests from the neighborhood, but I'm also seriously considering a Peruvian cafe," Rivero told us yesterday. It seems that sister Maribel Rivero, a recent graduate of the Latin Flavors program at the Culinary Institute of America's San Antonio campus, will be traveling and cooking in South America this summer, researching possible menu items for a new restaurant venture.