Alamo Drafthouse Goes All Out for Gatsby Opening

It's safe to say the creative team at the Alamo Drafthouse is getting into the spirit of Baz Luhrmann’s opulent new film, The Great Gatsby, unlike any other theatre in the country. They've designed both food and cocktail menus to celebrate the opening of the film and are throwing a flapper costume party in the bargain.

With Leonardo DiCaprio, Tobey Maguire, and Carey Mulligan in the cast, Luhrmann's take on the Fitzgerald classic should be a visual feast for moviegoers, and the Drafthouse kitchen and bar will enhance the experience. Starting with the opening Thursday, May 9, Gatsby viewers can enjoy cocktails paired with the period piece such as the Gin Rickey (gin, fresh lime, soda), the Fitzgerald (gin, lemon, sugar, and Angostura bitters), and the Seelbach (bourbon, Cointreau, two kinds of bitters, finished with Champagne). Bill Norris, the beverage director at the Alamo, concocted the terrific list, taking inspiration from the book. 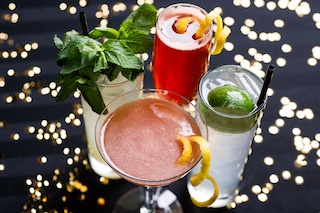 “One of the cocktails we'll be doing is the Gin Rickey," Norris explains. "Fitzgerald loved gin – he believed it couldn't be detected on his breath – and the Gin Rickey is the only cocktail mentioned by name in the text of The Great Gatsby. The Gin Rickey is deceptively simple and one of the best cocktails to sip on when the heat is oppressive. Given Fitzgerald's affinity for gin, and its prominence in the book, we had to serve it.” 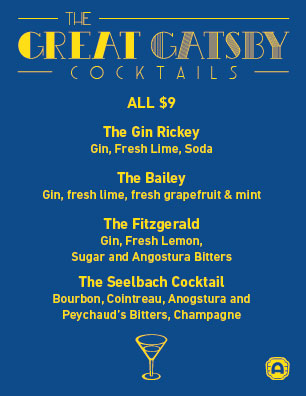 All drinks are $9. The cocktail menu is only available at theatres that have a full bar, so check ahead at your location.

On Friday, May 10, the Alamo at Slaughter Lane will host a Gatsby Speakeasy Party at 400 Rabbits with prizes for best flapper dress or tuxedo. Admission is free to the party where music by The Hollywood Revue will run from 6:30-10:30pm and the specialty cocktails will be available at the bar. Drop by in costume before or after the movie for some fun.

On Tuesday, May 14, at Lake Creek and Wednesday, May 15, at the Slaughter Lane theatre, the Alamo kitchen presents a Gatsby Feast to accompany the 7pm screenings. The $55 multi-course menu, designed by Drafthouse Austin Market Concept Chef Trish Eichelberger, includes beer and wine pairings.

“The over-the-top opulence of the 1920s is a huge part of Fitzgerald's use of symbolism in the food described in the book," she says. "When I think of the book, the descriptions of the food buffets talk of very rich and excessive food. I especially liked the line about the fruit being delivered on a Friday only to be discarded pulpless on Monday. It speaks of the futile chase Gatsby had to endure for Daisy's attention.” 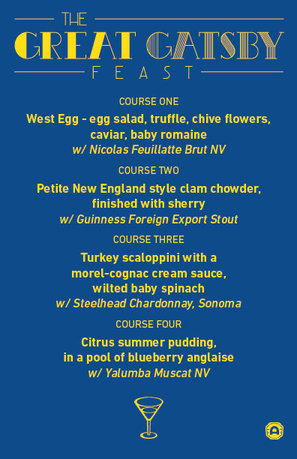 Complete details about the feast are available when purchasing tickets online. It promises to be an unforgettable night at the movies. In the meantime, both Bill Norris and Trish Eichelberger were kind enough to share recipes for those who want to have a little Gatsby experience at home.

This recipe makes one cocktail. It can't be made more than one at a time, because it's built in the glass it's served in.

Fill a Collins glass with ice and squeeze the juice of 1/2 lime over the ice reserving the shell. Add the gin and top with club soda. Stir very gently to combine the ingredients and garnish with the shell of the spent lime. If you like a slightly sweeter drink, add a teaspoon of simple syrup to taste, but remember the Gin Rickey is meant to be a tart, bracing, hot weather refresher, and too much sweetness will destroy the effect.

Citrus Summer Pudding in a Pool of Blueberry Anglaise

Serves four, depending on the size of your ramekins

Preheat the oven to 425°F. Spread the blueberries out on a sheet pan and roast in the oven for about 8 minutes or until soft and releasing some juices, set aside. Combine the cream, salt, and the vanilla bean in a small sauce pan and gently heat to a simmer, turn off and allow to steep.

Combine the sugar and yolks in a bowl and whisk vigorously until it begins to ribbon and the sugar seems mostly dissolved. Slowly pour the hot cream into the egg yolk mixture while whisking the whole time.

Once it is all combined, return the mixture to a clean bowl and place on top of a pot of simmering water. Whisk constantly until it thickens, about 15-20 minutes. Add the roasted blueberries and whisk them in so they break up and color and flavor the cream. Strain the mixture and place in the refrigerator to chill.