The change of venue made a huge difference. Instead of dog park dust in our eyes and our wine glasses, we got the soft green grass of Butler Park. A much better layout made the venue seem more intimate, and participants were able to tent-hop more easily. The satellite wine tents placed throughout the park made sure our glasses were never empty. 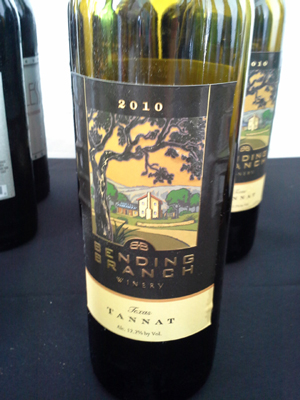 For the most part, the tents' proximity to one another did not affect the presentations, with the exception of Tim Love's apparent need to scream out his hands-on grilling demonstrations for the whole park to hear in an "Austin, are you ready to rock?" style. And judging by the lines and the roars from the crowd, the Food Network chefs are still as popular as ever. I preferred to keep my visit low key and actually learn something, so I focused on the wine and beverage seminars. Plus, I wanted to show support for our homegrown heroes (another high point for me about this year's festival: more local talent.)

As Wes Marshall already mentioned in his recap, we were fortunate to have Ray Isle and Mark Oldman return to share their vast knowledge, with witty and, at times, hilarious delivery. 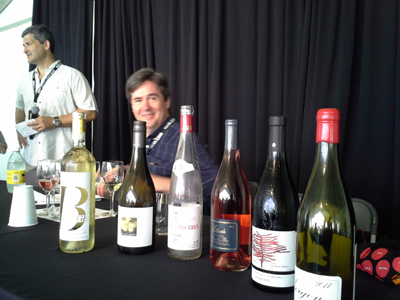 Ray Isle in front of his selection of wines for spring. (Photo by Claudia Alarcon)

Dr. Russ Kane shared the stage with Isle and local sommeliers June Rodil, Craig Collins, and Devon Broglie for an insightful and informative look at the Texas wine industry today. I had no idea that John Rivenburgh, brave vintner at Bending Branch Vineyards in Comfort, is making an impressive 100% tannat. Bill Norris' informative and thirst-quenching seminar on drinking vinegars and shrubs was an immediate inspiration. This weekend I will attempt to turn the loquats from my tree into a fabulous cocktail addition.

A few new features really captured my attention. The huge firepit in the center of the park featured a pair of chefs manning the grills each day and cooking just about everything under the sun. San Antonio's Jason Dady knocked it out of the park with spatchcocked turkey, whole branzino, and beef tongue, while Tim Byres of Dallas smoked them with whole roasted hogs served as tacos. Rene Ortiz served killer lamb tacos, and the dynamic hometown duo of Jack and Bryce Gilmore did a whole goat, enormous Gulf shrimp, grilled baby turnips, and a spring vegetable melange, perfectly in keeping with their locavore sensibilities. 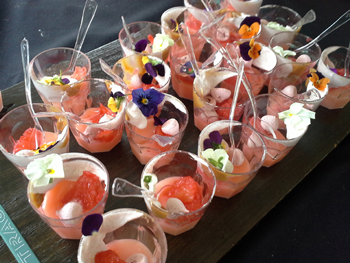 Tucked amongst the Grand Tasting vendors was the Chef Showcase, with a rotating line-up including Vespaio, parkside, El Chile, and more. I swooned over Shawn Cirkiel's cold pea and pistachio soup, and TRACE's Janina O'Leary's festive and tasty grapefruit budino with dulce de leche and edible flowers. However, I do believe this great festival addition should have a stand-alone tent and a participation schedule, so more people can enjoy it. 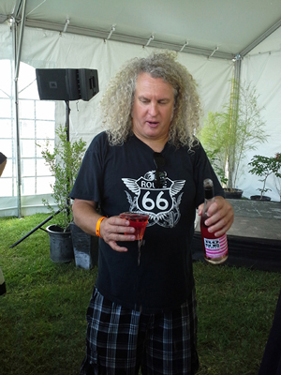 Charles Smith pours his rosé to a small crowd of lucky folks. (Photo by Claudia Alarcon)

Last but not least, the Tasting Room Sessions were the polar opposite of the cult-of-personality chef demos, with down-to-earth people in an informal chat that was more dialogue than presentation. Loved drinking Charles & Charles Rosé with the irrepressible Charles Smith, and learning about the future of cider in Texas with Argus Cidery's Wes Mickel. And what cocktail lover in their right mind wouldn't love hearing Austin's own Tipsy Texan, David Alan, discuss the local craft cocktail scene where he's had such an impact, and also get to see a sneak preview of his lovely new book he's got coming out in May, also called Tipsy Texan? So glad I was there! 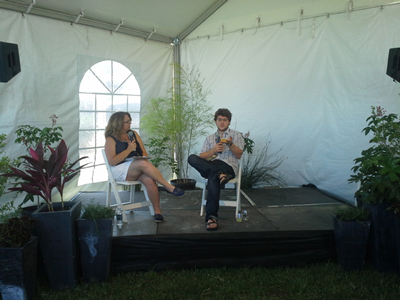 Long lines and small kinks aside, I believe this festival is coming into it's own. I look forward to what next year will bring.