Farmers Markets shift a few hundred yards in either direction 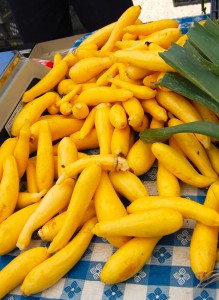 Itty Bitty Yellow Squash from Winfield Farm; these babies are about as big as your pinkie finger
After a much cooler than average April, we will be back up in the eighties this weekend, with the teasing possibility of rain. Too warm for a raincoat, I would say … just bring one in the car to wear it in the unlikely event that it actually rains.

Probably the biggest news this week is that the SFC Markets (Downtown and Sunset Valley) now have a fishmonger! Yvonne Cavazos of Concha’s Salsas has been driving to South Texas every week to get tomatoes and peppers for her salsas. She realized what a great opportunity she had to swing by the coast and get fresh seafood to sell while she was there. She will be bringing mostly shrimp, but also other seasonal seafood to the two markets, with the lion’s share going to Sunset Valley. The Saturday she will be bringing shrimp, snapper, and flounder. Tender young Pea Shoots at Barton Creek Farmers Market
The SFC Downtown Market will also be moving very slightly, this time to the West into the Federal Courthouse Plaza. The Republic Square Park is going to be fenced in to hold VIP events associated with the Austin Food and Wine Festival, which will be happening Friday and Saturday evenings. The SFC Market parking lot and other nearby parking won’t be affected. I am excited to see the setup in the Plaza – it’s a great space for the market and it will be much better in rainy weather than the park itself. Though I must say, fencing off public parks for private events does not sound at all acceptable to me, though of course the city does it all the time.

Dewberry Hills Farm will only be at Sunset Valley this Saturday, because only Jane is going to be free to come sell chickens. They are getting the electricity set up in their new brooder house; at some point in the not-so-distant future, Dewberry Hills is going to have enough chicken to supply the demand (which continually grows, because it’s “Damn Good Chicken”.)

J.J., who helps out at the Richardson Farm stand at Barton Creek Market, has started a line of hot sauces to sell along with her prepared mustards (J.J.'s Good Things). This time J.J. has hit the ball out of the park! These hot sauces are beautiful and remarkably delicious; I bought the Jalapeño and, yes, in one week it is gone. It was really flavorful, clean and bright with a lot of depth, too. She is making three varieties: Habanero, Jalapeño, and Serrano. 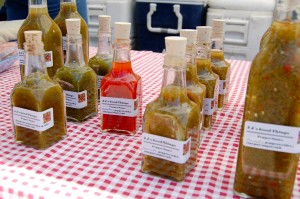 Fruitful Hill Farm will be doing both Barton Creek Market and Sunset Valley this weekend. I tried to get a photograph of their adorable tiny summer squashes with blossoms attached, but last week’s frost did the blossoms in at the last minute. I only got the above picture of the squash – they are very tiny, but you kind of can’t tell from the picture. Fruitful Hill will be bringing eggs, strawberries, squash blossoms, beets, garlic, broccoli, carrots, yellow squash and zucchini, red and Bibb lettuce, bulb onions, Swiss chard, cabbage, shallots, turnips, kohlrabi, radishes, pea shoots, arugula, and kale to the markets this weekend.

At the Barton Creek Market, both STAR Market and 2 Happy Children Farm have rhubarb this week. It has been selling out quickly ever since I featured it a few weeks ago. Here in Texas it is only around for a short time (I have read that in say, Minnesota, they have it all summer long), so get it while you can. I think I will totally make another strawberry rhubarb pie myself. Gorgeous long carrots at Sunset Valley Market
Winfield Farm has just finished canning a batch of Rhubarb Ginger Jam, and it is exceptional. They also have a Lemon Marmalade that is out of this world. Look out, Confituras! Winfield Farm has thrown down!

Winfield Farm will also be bringing amaranth to the market this weekend Farmer Johnson grew it last summer, you may remember.) Chefs are all over amaranth right now, it is such an interesting new green (well, new to us. It is actually one of the most ancient foodstuffs, a staple of the Aztec diet, for example.) But here is something amazing: amaranth is actually the traditional green used in Saag Paneer, not spinach, as is typically used in the United States! Now I can’t wait to make a batch of Saag Paneer with amaranth, to see what the dish actually tastes like in India.

Speaking of Farmer Johnson, he still has those wonderful spring parsnips this week at the JBG stands. Last week, he still had the organic oranges and grapefruits, but I didn’t have enough cash to get any. I sure hope he still has some this week. 2 Happy Children Farm is still drowning in artichokes, too. The weather for artichokes this year has been beyond perfect. Fresh Chamomile at Barton Creek Market
Comanche Oaks Farm will be bringing aromatic German Chamomile flowers to the market, for making your own fresh chamomile tea.

The Barton Springs Market welcomes a new baker: Bounce Bakery Gluten-Free. Bounce Bakery will be bringing vegan Teff Bread (I am very interested to try this, having attempted Teff Bread myself in the past, only to have it turn out rather like cold oatmeal), Seeded Teff Bread and Sorghum Bread, as well as gluten-free hamburger buns, blueberry muffins, and chocolate chip cookies.

See you at the market!