86'd Round Three: Success or Failure in 30 Seconds

Audience feels excitement as cooking contest goes down to the wire

Uchi's citywide 86’d competitions never fail to impress in talent, execution, and entertainment, but the third installment of this event proved to be the most exciting yet. 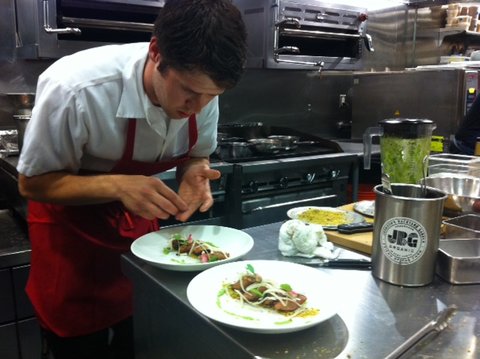 Corey Macks of Parkside perfecting his entrée plate. (Photo by Carly Yansak)
For anyone who hasn't been following along, 86'd is the Austin version of The Food Network's hit show Chopped, where chefs go blindly and bravely into a kitchen to prepare dishes with ingredients unveiled only seconds before preparation starts. It's never your typical rosemary or chicken components, either; one of the mystery ingredients this round was kikurage - also known as tree fungus.

Participants are allotted a set amount of time to create an appetizer, an entrée, and a dessert, with one contestant being eliminated each round after a panel of judges scores each dish. In the end, one contestant goes on to compete in an all-star round consisting of previous, and future, winners.

Competing this time were the following: Joaquin Ceballos of Sway, Corey Macks of Parkside, Dan Gamoran of La Condesa, and Coliman Uribe of Swift's Attic. These contestants had completely different experiences from competitors in previous rounds. There was a bigger audience, more members of the press, and, perhaps to make it more nerve-wracking, more chefs in attendance. These factors excited Philip Speer, Culinary Director of Uchi and host of the event.

"This round was a lot of fun because there were a lot more spectators. There are also two competitors who work for restaurants owned by the same group - La Condesa and Sway - so there was a type of interesting rivalry," Speer said.

This in-company battle became even more interesting when Ceballos of Sway and Gamoran of La Condesa were left knife to knife in the last round. The dessert prep was intense, and not because of their link. With only 30 seconds left on the clock, neither had begun to plate his final dish. The crowd watched from the balls of their feet as the two chefs collected their chocolate, pistachio, goose egg, and guajillo concoctions in a flurry of utensils and impossibly fast hands. Random exclamations of "oh my god!” and "c'mon, c'mon!" contributed to the tension in the air, and when they each somehow finished in time, spectators and judges let out a collective of relief.

"You both look a bit exasperated," commented judge Paula Disbrowe, Senior Travel Editor for Southern Living, as the chefs presented their desserts for final judgment. They both responded with uneasy laughter; their fates were now in the hands of the panel of judges that included Disbrowe, Uchi sous-chef Jeremy Robison, Elizabeth Winslow of Haymakers, and Jenny Chen of the MiSoHungry blog. After a deliberation complimentary to both competitors, Ceballos was chosen as the winner who would continue to the next competition. 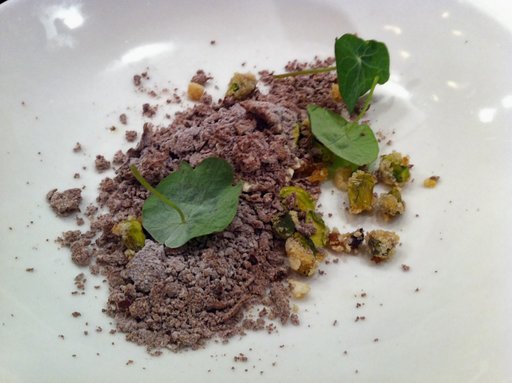 To be in a room with people so passionate and watch their creativity steer them into second-nature action is something anyone can appreciate. Whether you're a dedicated fan of Chopped, someone who cooks once a week, or someone who just enjoys suspense - this competition is something to be seen, and the contests are now open for the public to see.

The fourth round will be held 10am on May 10, at a location still to be announced. I would call it the “final round”, but something about the way Speer was hinting about a "wild card" edition, could prove me wrong if I did. Regardless, you’ll read about it on this blog.