We go together like brewers and chefs, music and beer, Kung Fu, hair

“Beer and music go together. They amplify the experience of the other.” So said Sam Calagione, founder of Dogfish Head Brewing, on Friday to a theatreful of Austinites who probably pair beer and music often enough to agree.

Calagione was introducing the Last Dragon Beer Feast, an 8-beer and 5-course dinner that is the main event of the Off-Centered Film Fest, itself a pleasing annual pairing between the craft brewery and Alamo Drafthouse.

The movie The Last Dragon juxtaposes cheesy 80s movies tropes with kung fu plot conventions, which makes America the greatest country on earth. The actress playing heroine Laura Charles was sexpot rock musician Vanity who sometimes opened for Prince. (Rihanna is rumored to take the role in the remake.) The actor playing hero Bruce Leroy had never acted before, but only rookie enthusiasm could finesse the scene when our African American protagonist eats his movie theater popcorn with chopsticks, still wearing his straw rice farmer hat.

Chef Trish Eichelberger watched the film many times, to inspire her dinner menu, of course! She fused Asian ingredients with soul food dishes to pack more punches than the Last Shogun of Harlem and Bruce Leroy combined.

The third course, for example, a fried rib, dripped with hoisin barbeque sauce and rested on miso-braised collard greens. The more sour beers of the bunch were poured to wash over that saucy rib: Chateau Jiahu, made according to the oldest surviving beer recipe found in a tomb in China, and Positive Contact, an ale brewed with apple cider and other ingredients scratching Dan the Automator’s tastebuds.

“I learn so much about America right now,” said my husband, a German national. He must have learned a lot about about how we pair neon and Aquanet, martial arts and rock music, and from Bruce Leroy’s father, New York’s only black pizza purveyor, passion and whatever the Hell we want to pair it with.

Today is my second wedding anniversary, which we’ve actually been celebrating since the dinner on Friday. When I got so drunk at the Jiggy Crunk Sing-Along after the movie that I "Hammer Danced" across two entire rows, my Beloved sobered up to drive us home. The next day, I drove, so he drank and decided to give half the contents of our fridge to a particular homeless man – except he was not homeless; he was just a hipster, and I said nothing.

I know why we go to the lengths we do in search of the perfect pairing, because I have one. 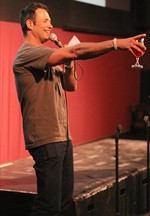