Was the Foodways Texas Symposium Worth the Price?

A barbecue enthusiast shares his experience

What is a Barbecue Symposium, and who would pay $280 to attend such an event? It turns out I’m one of those people, and I spent three days eating, talking, and thinking about one aspect of our state’s most distinctive culinary heritage, barbecue. 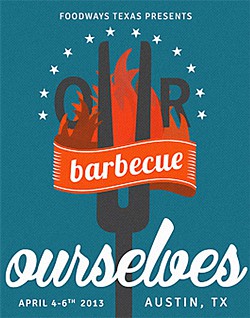 The event was populated with chefs, food writers, artisan food producers, culinary historians, academics, and, of course, pitmasters. People like me, let’s call us enthusiasts for lack of a better term, were welcomed as well. The guiding principle seemed to be that any citizen of this great state can claim a place within the realm of smoked meats.

Things began on Thursday, April 4, at Saengerrunde Hall, a perfect German location for a regional cuisine with an historical German influence. The Foodways Texas organization hosted this party, modeling it after similar annual symposia held by the older sibling Southern Foodways Alliance. The night started off with a bang: Franklin’s Barbecue. This was only my second time to partake of Aaron Franklin’s talents, and the two meat plate with Easy Tiger white bread set the food bar high for the rest of the festivities. This was also my introduction to the friendliness of the event. Three complete strangers, enthusiastic eaters from Dallas, sat at my table, and made the meal feel like old times with friends. We discussed everything from barbecue joints in Bryan/College Station to bad food we ate as kids. (SPAM!)

After we filled our bellies with brisket and pork shoulder, famed Texas Monthly writer Joe Nick Patoski spoke, outlining his adventures with barbecue throughout the years, and describing how much things have changed in this great state. He touched my heart with talk of the old cafeteria-style barbecue restaurants like Underwood’s. My grandmother worked at an Underwood’s decades ago, and every time I pass through Brownwood, I have to stop to eat some nostalgia. (I even have a t-shirt from there which I wore the next day; Joe Nick was tickled.)

The night ended with a short film produced by Foodways Texas, documenting the work of “Mama Sugar” Sanders and her Sugar Shack Trailblazers, keepers of the African-American barbecue tradition at Juneteenth celebrations and rodeos all over southeast Texas. A story about Mama Sugar appears in Robb Walsh’s new book Barbecue Crossroads – Notes & Recipes from a Southern Odyssey and Walsh nominated her to receive the organization’s Lifetime Achievement Award. Mama Sugar and many members of her family were in attendance for the screening and to witness her recognition as guests of honor for the weekend.

Friday morning, we were back at the hall, eating fresh Tex-Czech kolaches out of bags, getting ready for a day of more eating and more talking about food. The highlight of the morning was a panel featuring Aaron Franklin and Daniel Delaney, a New Yorker doing Texas barbecue in a restaurant called Brisket Town in Brooklyn. I knew some of Aaron’s story, but hearing about his relatively short journey from being Just a Guy to Mr. Texas Barbecue was intriguing. And Delaney’s tales of trying to convince New Yorkers to give our precious regional cuisine a try made me realize the current reach of barbecue styles. Both guys work their tails off making good food, just like any other pitmasters who take pride in their work. (Aaron routinely works from 1:30 a.m. to 5 p.m. six days a week.) It’s not a job for the faint of heart. I’m happy my job is just to eat it.

Lunch was presaged by a fresh onion tasting that left my mouth ablaze, but ready for what can only be described as a feast. Local chef Jesse Griffiths of Dai Due created a multi-course German extravaganza. For appetizers, we enjoyed Jesse’s custom cold cuts with assertive Fireman’s #4 mustard and quark cheese paired with David Norman’s huge, fresh pretzels. The main course came family-style, serving platters piled with two kinds of homemade sausage, potatoes, and sauerkraut. All this was served with whole-grain mustard and fresh rye and pumpernickel from Easy Tiger. Flaky strudel filled with local strawberries rounded out another remarkable meal. 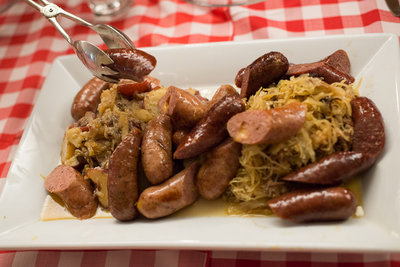 After taking the afternoon off, I returned for a dinner of Gulf Coast barbecue, consisting of shrimp, oysters, and crabs, all hot off the huge grills set up on the rooftop deck. This eat-with-your-fingers seafood extravaganza sent us all home wafting a smoky aroma. I ate with legendary barbecue photographer, Wyatt McSpadden, and his wife, Nancy McMillen. Wyatt and I are Amarillo boys, so we hit off, and agreed that our city’s best contribution to the barbecue landscape is the chopped beef sandwich. (Go to Doug’s!)

Saturday moved to the Art Building on the UT campus for a fantastic series of panels. Breakfast was provided by the husband and wife team of Robert and Kaci Lyford of Patina Green Home & Market in McKinney. The centerpiece was a smoked cheese biscuit that I joked was the artisan version of Red Lobster’s Cheddar Bay Biscuit. The Lyford’s were great people to talk to and their well-prepared breakfast started the day off right.

Wyatt McSpadden was joined by fellow photographers O.Rufus Lovett, Jody Horton, and members of Okay Mountain Artist Collective to discuss the images and art of barbecue; accomplished photographers sharing fantastic photographs. I have a feeling I’m going to spend a lot of money on their books soon. Southern Foodways Alliance director and author John T. Edge brought the Southern barbecue perspective all the way from Oxford, Mississippi. He supplied both information and thought-provoking questions about the origins and use of the term pitmaster, discussing the idea of the former slaves becoming masters in a specific arena.

Probably my favorite panel of the weekend was one on hunting for and by people who love to eat and cook. Jesse Griffiths was back and joined by Georgia Pelligrini, a chef from New York who, like Griffiths, taught herself to hunt over the last several years and has written a book about it. Both brought a welcome perspective on hunting completely different than that of the good ol’ boys popular gun culture. Their talk left me with the desire to make my own sausage out of boar meat. I’m officially smitten. 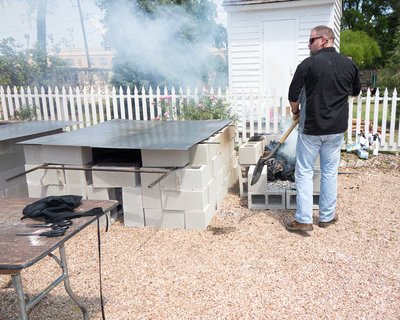 Checking out the grills on the French Legation patio (Photo by Rod Machen)
The symposium ended Saturday night with an enormous celebration on the grounds of the historic at the French Legation Museum. Smokers and grills were set up on the patio, and after cooking all day, chefs from Houston, Dallas, Taylor, and Tennessee prepared an amazing array of dishes: Alabama-style barbecued chicken with white sauce, huge beef ribs, brisket, fish, and boudin. With five serving stations, the food never seemed to end. Pecan pie topped with molasses ice cream capped off a lovely evening. My enjoyment of the evening was enhanced by the fact that I shared a table with Stacy and Aaron Franklin; we reminisced about his upbringing in Bryan where I lived in college and hers in Amarillo. Who knew I’d have so much in common with Texas barbecue royalty?

At $280 for non-members, the Foodways Texas Symposium wasn’t cheap, but with the caliber of cooking and the quality of the presentations, I definitely felt like I got my money’s worth. The day is probably fast approaching when this annual symposium will sell out quickly, leaving enthusiasts like me on the outside looking in. 2014 will feature new foodways to be explored, and I plan on being there.

Guest blogger Rod Machen is a barbecue enthusiast and high school English teacher. You can find him eating breakfast at the Dai Due booth at the Downtown Farmers’ Market most Saturday mornings.