Rhubarb and squash blossoms have arrived 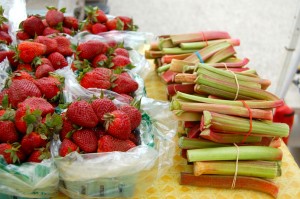 Rhubarb and strawberries: perfect companions
It’s going to be warming up this weekend, so we will be back to the sunny and dry weather. I am hoping it won’t be as humid as it was before that last front came in. Wasn’t that front great? Oh, how I cherish these last few blast of cool air before the heat sets in!

Barton Creek News: The first of the rhubarb has showed up at the STAR Farmers Market stand, along with the strawberries you will need to make that strawberry-rhubarb pie ... which is exactly what I did with mine! (I used the excellent recipe from Ruth Pinner’s classic book Sweety Pies, and it was the very essence of Spring.) 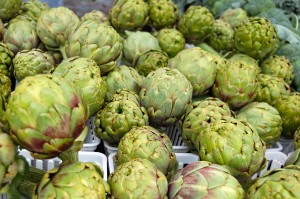 Not a stock photo! Actual picture of last week's young artichokes!
2 Happy Children Farm continues to have sweet young artichokes (the weather for artichokes has been perfect this year.) They are really a deal, less than a dollar each. What I have been doing is steaming them all on one day (since that takes a while) and enjoying the remaining ones cold for lunch later in the week. 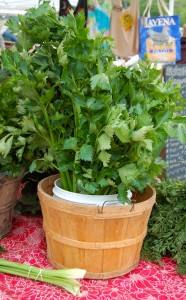 Tall fans of fresh celery at Barton Creek Market
This Spring has also been kind to celery. Last year only one farmer that I know of brought celery to the market, Finca Pura Vida Farm at Sunset Valley. Because it loves cool weather and lots of water, celery is quite difficult (I would have said impossible) to grow here, in our constant drought conditions and triple digit temperatures. Yet somehow, now I know of four or five farmers who are bringing the celery – the big ol’ stalks pictured below were grown by Winfield Farm. 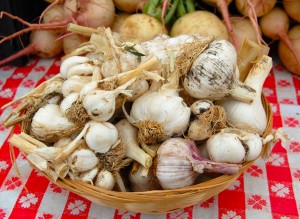 Freshly dug mature garlic bulbs
Several farmers have harvested their garlic as well: Fruitful Hill has a fresh crop, and Sand Creek Farm is a reliable garlic table year round.

As part of my arduous job as a Big-Shot Professional Food Critic, I have been been trying out seafood recipes from a recently published cookbook,The Lee Brothers Charleston Kitchen, which means I have been buying seafood from K & S Seafood. Their lump crab meat and jumbo shrimp were divine in Charleston Crab Salad and Frogmore Soup; in the interests of serious journalism I am afraid I will have to try out a few dishes with K & S oysters and red snapper too! 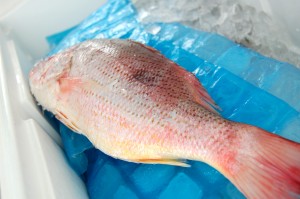 Get a load of this gorgeous whole Lane Snapper from the K & S seafood table
Fruitful Hill Farm will continue to be the front-runner on the squash front, bringing both summer squash, zucchini, and squash blossoms to the Barton Creek Market, along with eggs, strawberries, red beets, broccoli, carrots, fennel, Romaine, shallots, and more. Their Sunset Valley table will have the same, only minus the Squash blossoms.

Dewberry Hills Farm will again be absent from all markets this weekend, as their chickens are still not yet up to full size. Jane has been using the extra time to paint the inside of the new brooder house they are building. I guess that broken arm must be doing alright! Jane says, "Thanks again to everyone who donated to the broken arm fund!" 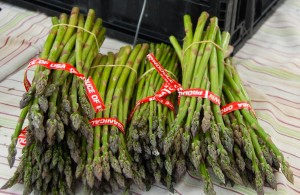 At last, asparagus. Apparently the weather this year was not so great for the asparagus harvest, because this is pretty much it.
This is a wonderful time of year, when all the winter crops are still around and some of the summer crops can be had from the greenhouse growers, too. There is plenty of forage for the goats and green grass for the cows, so plenty of cheese and milk. Speaking of which, I was misinformed about Mill-King Dairy: I reported in February that they were pulling out of the Barton Creek Market due to seasonally lower milk output. I was wrong! They have plenty of milk (because there is plenty of grass) and are expanding into other area markets and groceries. The break with Barton Creek Market apparently has other roots – it had nothing to do with milk supply – more on this story as it develops.