Restaurant magazine sparked controversy this week when it named Nadia Santini as Veuve Clicquot World’s Best Female Chef. It wasn’t that the award was undeserved (quite the opposite); but the female qualification has people (read: men) debating the necessity of gender-based awards. Why only women?

Why the fuck not? It’s no stretch to say female chefs are underrepresented in the profession. Without an opportunity to celebrate their contributions to the field, many amazing talents might otherwise go unrecognized. On average, female executive chefs make $19,000 less than their male counterparts, a figure that quite frankly echoes the disparity in many male dominated professions. That being said, I welcomed the opportunity to attend Eat, Drink, Woman, a celebration of 10 of Austin’s best female chefs. Now, let’s talk about pink peppercorn gastrique.

The showcase of women chefs was spectacular. A fundraiser to benefit One World Theatre’s scholarship program for the Berklee College of Music and the ProStart high school culinary scholarship program, standouts included Teresa Wilson of Aquarelle fame and Mulberry’s Kristine Kittrell. Wilson delighted guests with Lockhart quail breast scented with cumin, saffron potatoes, pickled beets, and candied garlic. Since the closure of Aquarelle she has kept busy with a steady stream of catering gigs. Culinary enthusiasts are waiting, some would say impatiently, to see what’s next for Wilson. But, the highlight of the evening belonged to Kristine Kittrell of Mulberry. Candied bacon, with black mission fig, Gorgonzola, and the above mentioned pink peppercorn gastrique – it was the single best bite of my life. Ultimately, I skipped the Bob Schneider concert. At an event celebrating female chefs, I’d have rather seen a woman. 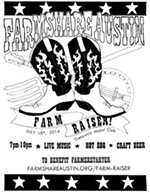