A day for chickenists and cyclists

“There were a few stressful moments, but the fact that there were chickens and people on bikes – those are two of my favorite things – made it the highlight of my year so far,” says Joseph de Leon, coordinator of the first annual Bicycle Tour de Funky Chickens. 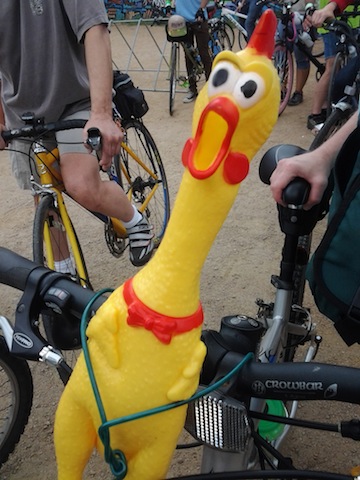 It was the first year for an official cycling portion of the Funky Chicken Coop Tour, but not the first year de Leon designed a route through the coops. Last year, he bought a map early and planned a ride between eight stops, then followed it solo, picking up one other person along the way. He said it was so enjoyable, he contacted the Urban Poultry Association of Texas, organizers of Funky Chicken Coop Tour, and Bike Austin to see if he could arrange a public one for this year. Both organizations were supportive and, while de Leon mapped the route and coordinated volunteers, Bike Austin took care of waivers and promotion with their members. Bike Texas also set up bike racks at each of the three stops, a nice touch to keep us all organized. 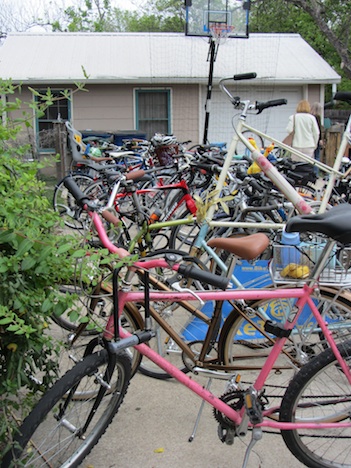 There were over fifty riders, ranging in age from toddlers to senior citizens. The pack was split into two groups based on speed, but everyone traveled at a “family-pace," enjoying conversation and meeting new people. We wove through quiet streets in North Central Austin, as the route was designed to avoid most main roads and any traffic thoroughfares. The crowd was well managed as fifteen volunteers from Social Cycling Austin led the way, telling us when to turn, when to go through intersections, and making sure everyone kept up with the pack and stayed safe.

The tour covered eight miles and visited three coops, all different, creative, and informative. A cloudy day opened into sunshine, and we ended on a high note by stopping at coop No.4, St. Francis School. After I parked my bike, Mira, one of the third grade students who manages the coop, asked me if I wanted to learn the names of the chickens. She told me all about their different breeds, where they nest, and how the class cares for them. I learned about the average lifespan of a chicken (10-15 years!) and that you can persuade a chicken to lay in a certain place by setting golf balls or rocks in the nest. She worked with several other students to inform each visitor about their project, and their enthusiasm was contagious. 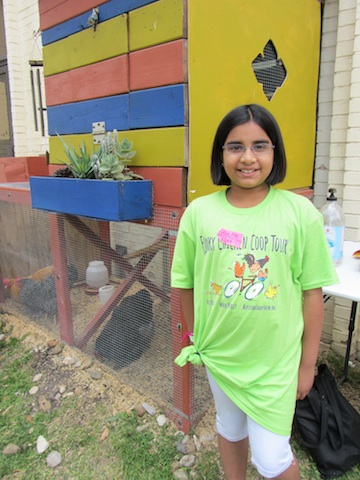 Coop No.4 also had the Greenling stand offering free, fresh, organic fruit to riders and other visitors. Sara, their representative, beamed about the different local farms that provide their hand-selected ingredients and explained how to order off their website for free delivery. It was a great way to re-energize on what had become a warm and sunny day.

de Leon says they will do a second bicycle tour next year and are ready to expand the number of riders and the options available. They will be advertising through The Funky Chicken Coop Tour, Social Cycling Austin, Bike Austin, and any other cycling organizations that participate. Next year's tour is set for April 19, 2014. 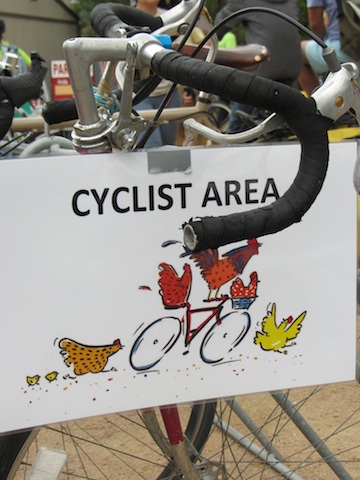 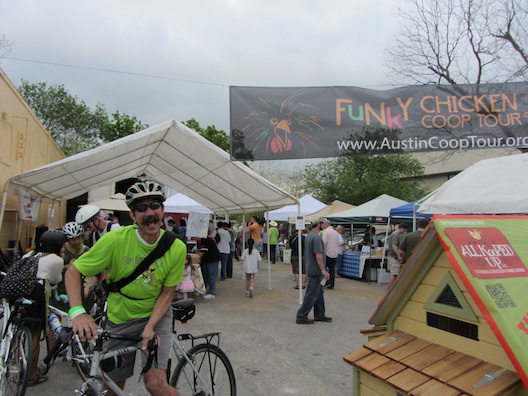 At the starting line, getting egg-cited for the tour (Photo by Margaret Shugart) 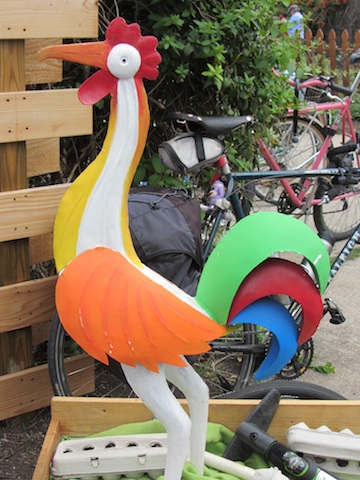 Our cycling mascot, leading the way (Photo by Margaret Shugart) 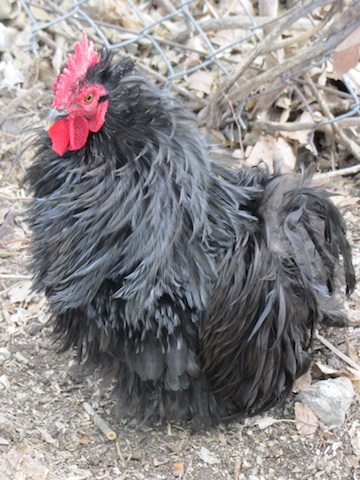