This past Saturday marked the second round of 86'd, an invitational cooking competition that provides Austin’s culinary talent the opportunity to showcase their skills and creativity. 86'd is Uchiko's version of the Food Network's popular show, Chopped. 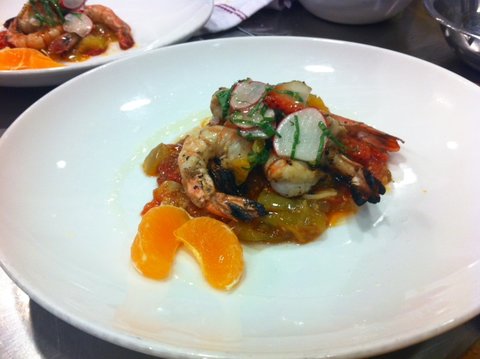 Abby Yates' plate for the entrée round (Photo by Carly Yansak)

Four contestants are given containers of mystery ingredients and must prepare appetizers, entrées, and desserts in a specified amount of time. Judges evaluate the dishes on taste, presentation, and creativity, then one contestant is eliminated (86’d) in each round. Cooks from some of Austin's finest restaurants are among the contestants. 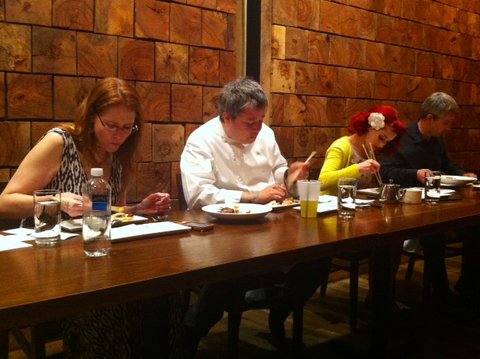 Round two was quite different than last month's first round, with one of the largest variations being the type of ingredients selected. Calamari, red pearl onions, red grapes, and gooseberries were the appetizer components, choices that even noncooks such as myself could identify as complementary. Host and judge Philip Speer circled the contestants as they began to prep the items.

"How do you feel about the ingredients?" he asked Abby Yates.

"Great. I thought they'd be harder," she responded.

Ryan Shields of Olive & June, a first-round competitor and fellow audience member this time around, sighed as I asked him what he thought of the ingredients in this series versus the first one. "This is much more versatile than when I had to do it," he said. "They're all very complementary, a lot more so than pepperoni and guava!"

Shields wouldn't take back what he had to work with, though, and Speer explained why he chose the simpler ingredients. "To me, simpler is almost more difficult. They weren't that overwhelmed, yet I still got fried calamari. I want to see if they can think beyond just sautéing or searing. The simplicity is really a way to see what kind of techniques they're using."

While last month's competitors were calm, cool, and collected despite the tension, this round offered a higher level of excitement. In the appetizer round, Drew Shriver was eliminated because his breading didn’t stick to the protein. Vincent Guerra was taken out of the entrée round on a technicality - when he went to use the fryer, he discovered it was not on and wouldn’t heat up in time to prepare his dish. His plate didn’t make the table, but he bowed out with utmost grace.

"My heart kind of dropped, but I try not to get too upset about things, and it was still fun. It was a good experience, and I got to meet great people," Guerra commented. Shrimp, tangerine, sweet miso, and tomatillos ready for the entrée round (Photo by Carly Yansak)

Throughout the courses, Abby Yates brought the kitchen alive. She was energetic, vocal, even a bit high-strung. Her bio for the event claimed she is "currently the crabbiest cook at Swift's Attic," and when her crème fraîche spilled over during the dessert round, the way she exclaimed, "Shit!" gave truth to the statement.

In the end, Brandon Martin of Foreign & Domestic came out on top. Perhaps it was the way he followed his instinct with the Epoisse cheese ingredient. When one of the judges asked him why he chose to freeze the cheese with liquid nitrogen, he answered - "I didn't really know what to do with the cheese, so I was like, 'I guess I'll just freeze it…'. I figured it would do good things to the texture."

Now Brandon Martin is the newest addition to the list of competitors who will move on to the grand finale on June 15. So far, Martin and John Hajash of Congress are in the running. Who will be next? The answer to that will be revealed April 24, when four more yet-to-be-determined contestants will take to the kitchen.

Stay tuned for round three. Something tells me it's going to be a good one.